Later this month, members of the World Health Assembly will meet in Geneva to discuss its policies, among other things.... 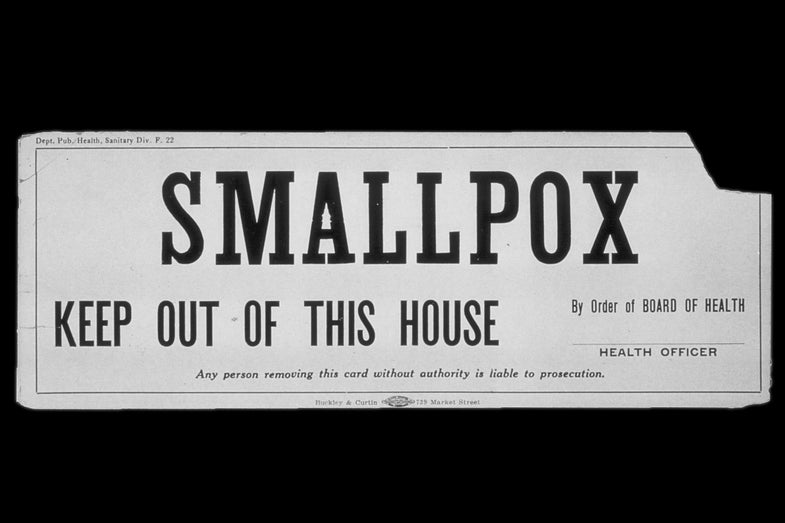 Later this month, members of the World Health Assembly will meet in Geneva to discuss its policies, among other things. On the agenda: whether or not to destroy the world’s only existing smallpox laboratory samples.

The World Health Organization declared smallpox eradicated in 1980, but two stockpiles remain in high-security labs, one in the United States and the other in Russia. Scientists have been arguing over keeping or eradicating these stocks for years. The main debate centers on whether it makes more sense to destroy them immediately or to wait until two related antiviral medications and make it through clinical trials. You can read more about the debate in this Quartz article.

But what exactly is smallpox? If you’re American, you may have a hazy memory of learning about it in elementary school during a play in which a kid dressed as a British soldier handed a pretend smallpox-infected blanket to a kid dressed as a Native American (No? Just me? Well, anyway, read more on the topic here). Unless you’re an epidemiologist or you have a thing for gnarly medical history, you may not have learned much more.

Smallpox is a nasty and very contagious disease caused by the variola virus, part of the poxvirus family. It comes in two flavors: variola major and variola minor. The former is by far the worst of the two and kills around 30% of the people it infects. It has four distinct types: ordinary, modified, flat, and hemorrhagic. Unsurprisingly, ordinary variola major is the most common, infecting around 90% of people who have the disease. Modified occurs in people who were already vaccinated, and the remaining two are the most rare and most dangerous.

After exposure to the virus, which can happen via prolonged interaction with someone who is sick or through contact with infected body fluids or clothing (or…blankets), it takes around 12 days for symptoms to appear. These include fever, headache, and muscle pains, as well as the signature rash that eventually forms nasty pustules. 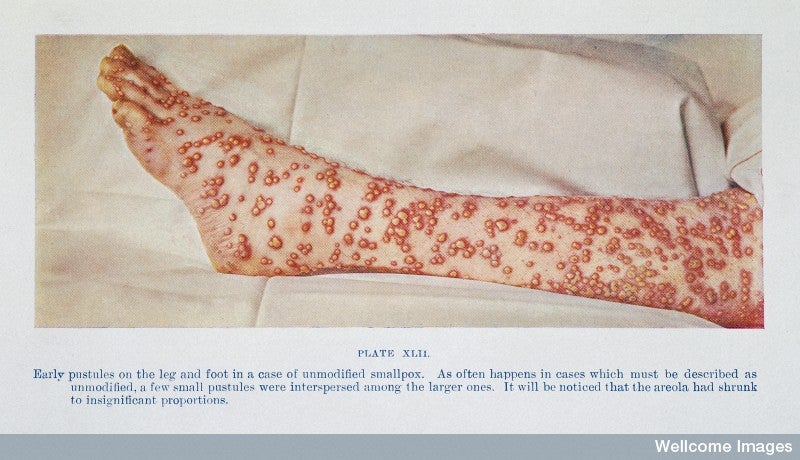 Pustules on the leg in a case of ordinary smallpox

Smallpox epidemics have likely occurred since ancient times, although records are incomplete. By the sixteenth century, the virus spread widely as European colonists carried it to the Americas, South Africa, and Australia. People native to these regions had never been exposed to smallpox before and had no immunity. It was a biological massacre.

By the early 1700s in Europe and North America, people were inoculating themselves from smallpox by exposing themselves to scabs or pus from infected people (the practice originated in Asia, where people apparently snorted dried smallpox scabs up their noses). This process, also called variolation, was somewhat dangerous but not nearly as deadly as an actual smallpox infection.

Later that century, a doctor named Edward Jenner noticed that milkmaids who contracted cowpox, another member of the poxvirus family, were naturally immune to smallpox. He developed the world’s first vaccination using cowpox virus (“vaccination” is derived from vacca from the Latin word for cow). Eventually, smallpox vaccines would be used to wipe out the virus around the world. It was the first and only time we’ve been able to intentionally and entirely eradicate any illness through modern medicine.

Which brings us back to present day and the uncertain fate of the world’s last known smallpox stockpiles. What do you think, readers? Should the WHA vote to keep smallpox around for a little longer or scrub it from the face of the planet? Add your vote in the comments.