For decades, scientists have been on the hunt for a universal common cold vaccine—and they're still searching. 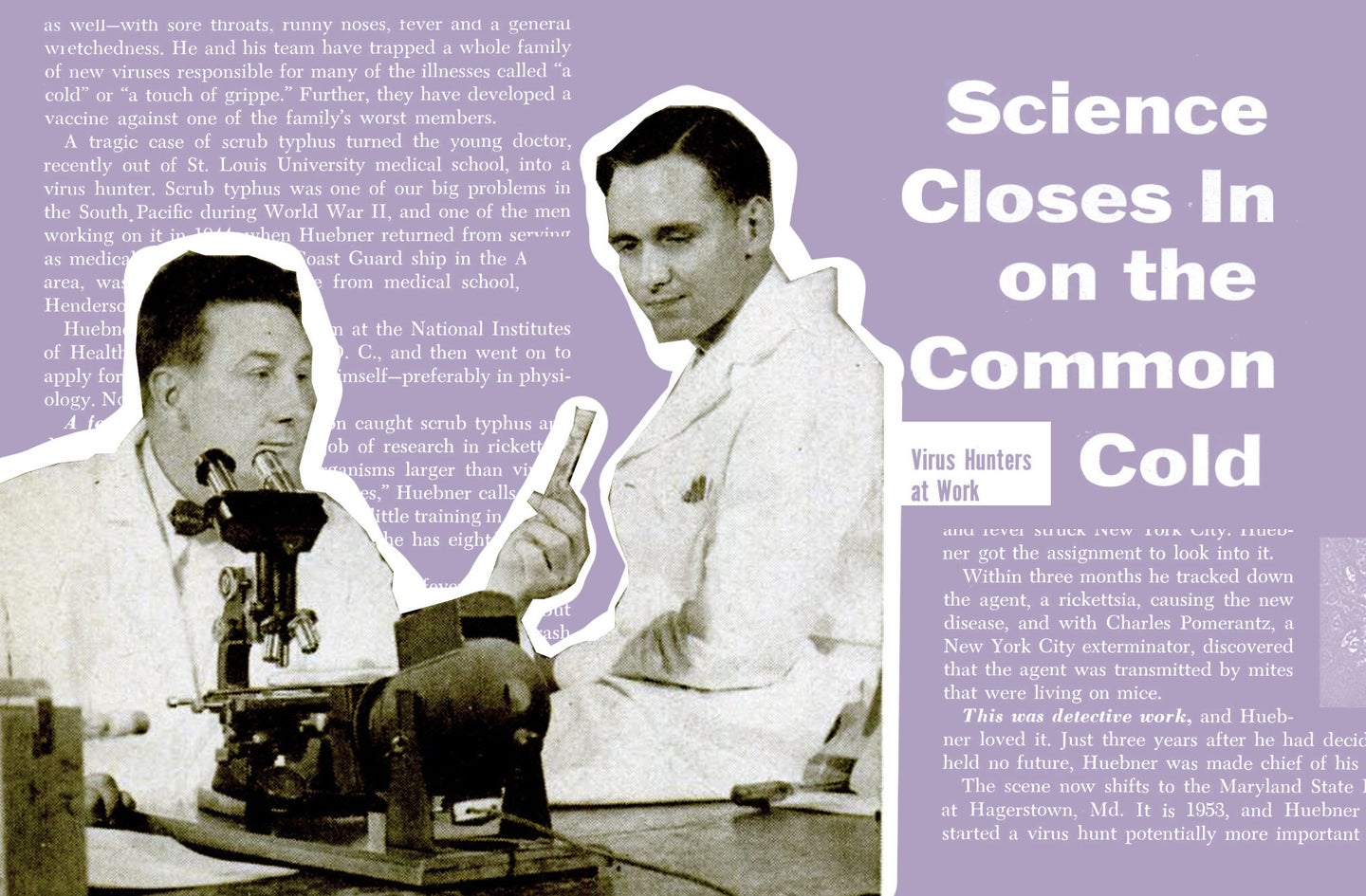 Feeling yucky? Runny nose, scratchy throat? Maybe a cough, with light chills and aches, possibly a low-grade fever? We’ve all been there. Statistically, everyone comes down with these symptoms multiple times a year. These past few years, it would be tempting to blame some variant of the COVID-19 coronavirus, or SARS-CoV-2, for such symptoms. However, there’s also a strong possibility that it’s a distant cousin on the human virus family tree, one that is responsible for more sick days and visits to the doctor each year than any other pathogen—rhinovirus. Common cold symptoms can be caused by many viruses, but the odds you’re fighting a rhinovirus are high: the virus accounts for as much as half of all common colds.

Traditionally, there has been a certain seasonality to respiratory viruses in the US. Influenza tends to peak in fall and again in early spring, while common colds, such as respiratory syncytial viruses (RSVs), non-COVID coronaviruses, adenoviruses, and rhinoviruses pick up in mid-winter. But COVID-19 seems to have disrupted the normal pattern. “We typically see RSV at the peak of winter season,” says Richard Martinello, a respiratory virus specialist at Yale School of Medicine in Connecticut. “But our hospital’s already full. We’re trying to figure out where to put patients and how to care for them.” It’s not just RSV. “We’re actually seeing occasional kids with pretty severe rhinovirus infections,” Martinello adds, “and adults with severe rhinovirus infections in the hospital this year.”

Every year, we’re encouraged to get our annual flu shot—and it seems COVID vaccinations are headed down a similar path. Yet, we don’t get one for the common cold. With more than a billion cases each year in the US alone—far more than any other virus, including COVID-19 and the flu combined—it’s hard to overstate the uplift a universal common cold vaccine would have. The hunt for such a vaccine began more than half a century ago, as Popular Science reported in November 1955.

Dating back to the 19th century, a slew of vaccines have been developed for many of humanity’s most pervasive pathogens, from the very first vaccine in 1798 for smallpox to cholera and typhoid in 1896 to the COVID-19 vaccines in 2020—but no common cold vaccine.

In the 1950s, however, flush with the success of Jonas Salk’s polio vaccine, virologists were convinced it would be just a handful of years before the common cold would be eradicated by vaccine. In the 1955 Popular Science article, prolific virologist Robert Huebner estimated that a vaccine for the common cold might be available to the general public in as little as a year. While Huebner—who is credited with discovering oncogenes (genes with the propensity to cause cancer)—was successful in developing an adenovirus vaccine specifically for pharyngoconjunctival fever, he never fulfilled his quest for a common cold vaccine.

[Related: What’s the difference between COVID, flu, and cold symptoms?]

Although Popular Science’s story focused on Huebner’s 1953 discovery of adenovirus as a root cause for the common cold, it wasn’t until Winston Price’s 1956 discovery that virologists realized rhinovirus was the chief common-cold culprit. Since Price’s discovery, three species of rhinovirus have been discovered (A, B, and C), including more than 150 distinct strains. Plus, a majority of the known rhinovirus genomes have been sequenced in an effort to find commonalities that might serve as the basis for a universal vaccine.

“Considering there are more than 100 types of A and B rhinoviruses,” notes Yury Bochkov, a respiratory virus specialist at the University of Wisconsin School of Medicine and Public Health, “you would have to put all 100 types in one vial of vaccine in order to enable protection” against just A and B rhinoviruses. Add in all the C rhinovirus types (more than 50), then cram in RSV’s virus types (more than 40), and that same vaccine would have to be packed with more than 200 strains. Even then, it would only offer protection against about two-thirds of all common colds. “That was considered the major obstacle in development of those vaccines,” Bochkov says.

When it comes to manufacturing universal vaccines, scientists hunt for the lowest common denominator—a common trait that the vaccine can target—shared by all variants of a virus. Unfortunately, viruses aren’t that cooperative. Breaking them down to find common traits is not so easy. To trigger antibody production, human immune systems must be able to recognize those common viral traits as belonging to an intruder. That means the traits must be exposed, or on the surface of the virus. Traits locked inside the virus particle, or in its capsid structure, are not detectable until after the virus has begun to replicate, which is too late to avoid infection.

Antibodies, which are made of protein-based immunoglobulins such as IgM and IgG, are Y-shaped cells that continuously circulate through our blood, and latch onto invading pathogens, which are recognizable by certain sequences in their surface proteins. Antibodies are capable of disabling the invaders until the white blood cell, or leukocyte, troops can arrive to kill them. The goal of a universal vaccine is to not only find an antibody-triggering trait common across those many distinct types of the same virus, but also find a trait that is slow to mutate—or one that doesn’t mutate at all. In the cases of universal coronavirus and influenza vaccines currently under development, researchers have focused on more than just the surface protein, targeting other viral parts, such as the surface protein’s stalk, that are still detectable by our immune systems, but less likely to mutate from one variant to the next.

Viruses travel light, in other words they don’t carry around the machinery to replicate on their own. Instead, they use their surface proteins to bind to our bodies’ cells, then trick them into replicating virus particles. Coronaviruses, for instance, are known for their distinctive spike surface proteins, which became the focus of COVID-19 vaccines. Similarly, rhinoviruses have their own distinguishing surface protein shaped like a cloverleaf, which plays an essential role in the virus’s ability to hijack cells and replicate. Unfortunately, surface proteins tend to mutate quickly, enabling viruses to shapeshift and evade detection by our immune systems. That’s a chief reason why flu vaccines, and now COVID-19 vaccines, must be updated at least annually.

Fortunately for RSV, scientists have identified such commonalities. RSV is considered among the most dangerous of common cold viruses, especially for infants and children who are susceptible to respiratory tract infections. After a failed human trial in the 1960s that led to the death of two infants, it took another half century before scientists identified an immutable common trait—RSV’s surface fusion protein, or F protein, that binds to cells. Now, four different vaccines are already in the final third phase of human trials. “And they’re working,” Martinello notes, “they’re working amazingly well. It’s a very exciting time for RSV right now.”

But for a common cold vaccine to make a dent in annual infections, protection against rhinovirus must be developed, too. While progress has been made on RSV, the quest for a universal rhinovirus vaccine has received less attention. That may be changing.

Since the 1960s, there have been several human clinical trials of rhinovirus vaccine candidates, although none have been universal. Still, some results have been promising—one trial reduced symptomatic colds from 47 percent to 3.5 percent. However, the vaccines have only been effective on a few of the more than 150 strains. In the 2010s, researchers developed synthetic peptide immunogens capable of triggering immune responses in rabbits exposed to 48 different strains; peptides are the building blocks of proteins, which give cells their shape, and peptide immunogens attract antibodies, encouraging their production. In a 2019 study, researchers identified a way in mice to deprive rhinoviruses (and other viruses) of a specific enzyme they need to replicate.

In 2016, a 50-valent rhinovirus vaccine, or 50 strains in one shot, was successfully trialed in rhesus macaques, and a vaccine with 25 strains in mice. But even if such vaccines make it into human trials, that leaves more than 100 unaccounted-for rhinovirus strains.

“What if you could split [all the different strains] into several groups?” Bochkov says. “Then I think you would have higher chances of finding something that would be conserved within a group.” It’s like breaking fractions into similar groups and finding the least common denominator for each—or, in this case, separating out groups of strains with common traits and developing individual vaccines for each, which are all later combined into one super-packed vaccine. That’s precisely the direction research team’s like Bochkov’s are heading with rhinovirus species C. Once separate vaccines are developed for individual groups, they might be bundled into a single shot, which is called a polyvalent vaccine. This approach of targeting multiple strains in one shot has already been proven a successful way to control viral diseases. The annual flu vaccine, for instance, is a polyvalent vaccine designed to target three or four of the flu strains most likely to circulate in a given year. Similarly, the new bivalent COVID booster shots create an immune response to both the original strain of SARS-CoV-2, as well as recent Omicron strains.

Better tools for genome sequencing are also on the rise, including AI software that can be used to analyze surface proteins and predict possible mutations, like Google’s AlphaFold. This combined with mRNA platform technologies that expedite vaccine development makes Martinello and Bochkov optimistic that more respiratory virus vaccines will be developed in the coming years. “Maybe we’ll see a flu, COVID, RSV vaccine all combined in one,” Bochkov says, adding that “vaccination would be the way to go in fighting the common cold.”

Even as progress has been made on a universal flu vaccine and a universal coronavirus vaccine, the quest for a universal common cold vaccine has received less attention. That’s in part because public health efforts need to focus and allocate vaccine-development on the deadliest and most infectious pathogens first. As contagious as common cold viruses are—they spread through droplets that are airborne or left on surfaces—COVID-19 is at least 10 times deadlier than the flu, and the flu is deadlier than the common cold. Still, the common cold can lead to serious complications for people who are immunocompromised or have lung conditions, like asthma and chronic obstructive pulmonary disease.

While the search for a universal common cold vaccine began several decades ago, it is not likely to be fulfilled anytime soon, despite recent advances like the RSV vaccine trials. So, keep those tissues handy and wash your hands frequently. Wearing face masks as a prevention tactic isn’t exclusive to fighting COVID—they also work against the spread of other respiratory illnesses, including the common cold. “We have to be cognizant of what the risks are and thoughtful about how we protect ourselves from getting sick,” Martinello notes. “If you are sick, stay home, keep your kids home, because you know when you’re out and about that’s how that’s how things further spread.”

And when common cold vaccines do arrive, even if they’re virus-specific at first, don’t hesitate to get your jab.