On Ceres, water ice survives just below the surface, and in the darkest craters

Water, water, everywhere (but especially around the poles) 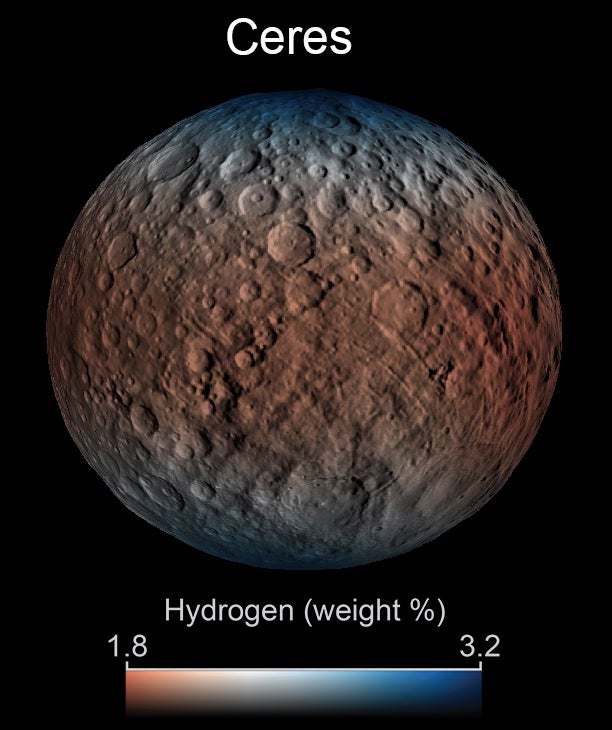 The dwarf planet Ceres is more than just a mud ball in the asteroid belt between Mars and Jupiter. It’s an icy mud ball, according to two new papers, and it may help scientists figure out where to find water in our solar system.

A paper published Thursday in Nature Astronomy surmises that on Ceres, craters that rarely or never see the light of day may contain water ice.

Using data from NASA’s Dawn spacecraft, which has been orbiting the former planet since 2015, scientists have identified 634 permanently shadowed craters around Ceres’ north pole. They discovered reflective deposits on the floors of 10 craters. A spectroscopic analysis confirmed one of the deposits as water ice, which leads the researchers to think that plenty more of Ceres’ cold, dark craters may contain frozen water.

Scientists aren’t sure how the water got there, but it may have been ejected by cryovolcanoes, or deposited by asteroid impacts.

Scientists previously detected water on Ceres in 2014 and 2015, and a paper published Thursday in Science suggests that much of the dwarf planet is coated in water ice just beneath the surface, particularly near the poles, where water makes up about 30 percent of the material.

Apart from these shadowy craters, water ice isn’t expected to live long on Ceres’ surface. Because the dwarf planet barely has an atmosphere, water ice boils off at the slightest touch of sunlight. But in the permanently dark craters on Ceres’ north pole, temperatures reach as cold as -328 degrees Fahrenheit.

Cold traps filled with water ice have also been spotted on the Moon and Mercury, and may be common throughout the solar system.

Entrepreneurs hope to one day mine the water deposits that may be lurking in the moon’s south pole. This water could be used for life support on a crewed lunar outpost, or split into hydrogen and oxygen—rocket fuel. But, oddly, lunar spacecraft haven’t detected the reflective ice deposits seen on Ceres—only hydrogen signatures. It may be that the hydrogen is tied up in rocks and soil, instead of large blocks of ice, which could make it more difficult to mine for water on the moon.

The team hopes that understanding water ice on Ceres will help us understand more about water all over the solar system.