Many Of The Eye’s Color-Sensing Cells Code For…Whiteness

When individual cone cells are activated, only some signal color 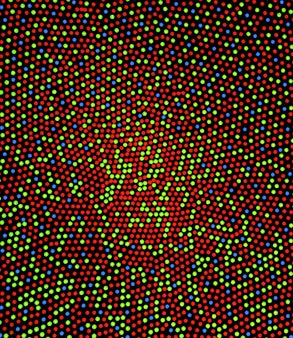 Scientists have for the first time pinpointed individual color-sensing cells in the eyes of living people and turned them on. It turns out that many of these cone cells actually don’t help us see color, the team reported today in the journal Science Advances.

The scientists used flashes of light to stimulate 273 cone cells in the eyes of two men, and asked them to describe what colors they saw. Some cone cells reliably signaled colors, but others caused the men to perceive a sensation of whiteness. This indicates that the brain handles information about color separately from brightness and form.

The backs of our eyes, or retinas, are filled with light-sensitive cells called rods and cones. Rods help us see in dim light, and don’t perceive color. “In order to see so well at night rods must be exquisitely sensitive to small amounts of light,” coauthor Brian P. Schmidt, of the University of California, Berkeley, said in an email to Popular Science. “Unfortunately, as a result of this heightened sensitivity, rods become saturated, or unresponsive, during the day.”

In bright light, cones must therefore take the lead on both color and black and white vision, he says. One type of cone cells, called L-cones, is sensitive to red and yellow lights, which have longer wavelengths than other colors. M-cones absorb green light, while S-cones detect shorter wavelengths to help us see blue light.

“What we discovered is that a large portion of the M- and L-cones, when activated alone produce white sensations,” Schmidt says. “Meanwhile, a small fraction of L- and M-cones generated red or green percepts.”

These different groups remained steady over time. When Schmidt and his colleagues targeted the same cone cell on different days, it stuck to its “assigned” role to prompt either color or whiteness.

“The different ‘sub-types’ of L- and M-cones seem…to feed into separate circuits concerned with either black/white or color vision,” Schmidt says. “The brain uses the high-acuity black/white system to find edges and fine details of objects and then fills in (like a coloring book) the color between those edges.”

So having so many “white” signaling cones may help our brain figure out the edges and lines of what we are seeing at such a high resolution.