Applications are open for their Science Ambassador Scholarship 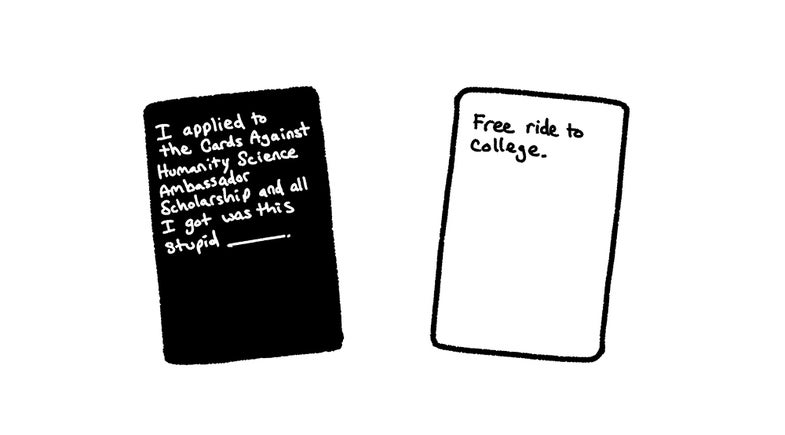 I haven’t played Cards Against Humanity in years, but I still follow everything they do. In addition to peddling the controversial card game, CAH, the company, is known for its publicity stunts—such as raising prices on Black Friday or selling boxes of actual cow dung—as well as for some really cool humanitarian endeavors. My favorite being their new Science Ambassador Scholarship.

The makers of the “party game for horrible people” founded this program in 2014 with the aim of giving one woman studying science, technology, engineering, or math up to four years tuition money. The scholarship is funded by the sales of the game’s “Science Pack” a 30-card booster written by fellow science cartoonist Zach Weinersmith and astronomer Phil Plait. At the time of writing this post, the decks have raised over $970,000 for the scholarship trust. That’s right, a $10 pack of cards is helping get more women into STEM fields.

From the official press release:

The scholarship beneficiary is chosen by a board of over 60 women who work in science fields, and include representatives from NASA’s Jet Propulsion Laboratory, Harvard Medical School, the Smithsonian Institution, and the U.S. Army Corps of Engineers, as well as TED, NSF, Huxley, and Hubble fellows.

You may recognize one of the board members, Veronica Berns, who has been featured on Boxplot before—both for her work in x-ray crystallography and for turning her Ph.D. thesis into a comic book. She says, “We’re accepting video applications because we want to raise visibility of women in science. Production value isn’t a factor in these videos. We’re looking for passionate, creative students who can break down a complicated scientific topic.”

Last year’s winner was Sona Dadhania, a sophomore at the University of Pennsylvania. You can watch Bane from Cards Against Humanity break the news to her below.

To learn more about the scholarship or to apply, visit ScienceAmbassadorScholarship.org

You can contribute to the fund by buying a Science Pack at CardsAgainstHumanity.com.

Full disclosure: I think the Cards Against Humanity team is full of the most wonderful people