It’s almost never too early or too late to get vaccinated against influenza. 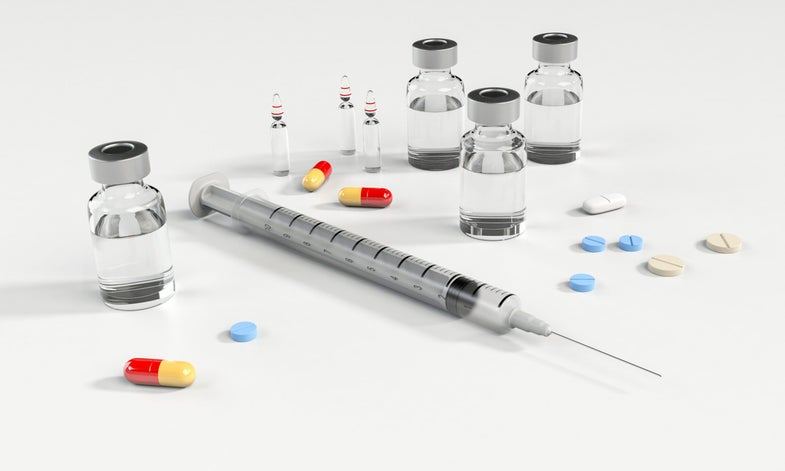 It’s September, and even though the only thing on your mind is trying to hold onto the last few drops of summer, doctors have something else on their minds: the flu.

Yes, it’s already time for your annual flu shot. Yes, it does feel like the season just ended. Here’s the thing though: a lot of people wait until it’s officially flu season to get vaccinated, but the ideal time to get your annual dose is before everyone starts getting sick. It takes about two weeks from the time you get your shot for your body to be fully protected against the strains in the vaccine. That’s because you’re really doing most of the work. Your immune system produces antibodies that target the influenza strains in the shot, a process that takes time. If you wait until your neighbors are coughing to go get poked by a pharmacist, you risk contracting the flu even after you’ve had the vaccine.

You really shouldn’t wait to get the shot, but in case you’re still on the fence, here are some key points.

It’s not too early to get the flu shot

Officials at the Food and Drug Administration decided way back in March which influenza strains would go into this year’s shot. They convene so early because they have to give all the pharmaceutical companies time to actually make the vaccines, and often they’re just confirming what the World Health Organization has recommended for countries in the Northern Hemisphere. We can’t know for sure which strains will dominate the flu season, so officials try to predict what the upcoming season will look like before the current one is even over based on data that the WHO collects on the genetic composition of circulating viruses. Sometimes they get it right and the vaccine gives decent coverage, sometimes they miss and we have a particularly nasty year. We never know whether they made the right call until it’s too late.

All this is to say that even though it is only early September, the vaccine for the 2018-19 season is already available, and your immunity won’t fade if you get it now instead of in November when everyone in your office gets that glazed, feverish look, and starts coughing everywhere.

Everyone older than six months should get vaccinated

There are a few exceptions here, mostly if you have immune issues that make getting vaccines dangerous for you, but in that case your doctor should tell you if you should be avoiding vaccines. If you’re a healthy person, you should get the flu shot. Period. The American Academy of Pediatrics recently released new recommendations, which are mostly not that new and re-confirm what they and other health organizations have said for years: “Annual influenza vaccine is recommended for everyone 6 months and older” and “vaccination remains the best available preventive measure to prevent influenza illness.” They also say that kids should get the vaccine as soon as possible, ideally before the end of October. The Centers for Disease Control says the same thing.

Research in the last couple of years has proven that, although most vaccines are still made in eggs, the shot is safe for people with egg allergies. If you’re still worried, you can get one of the vaccines made in other animal cells and are completely egg-free.

Pregnant people can get the flu shot

Whatever stage of pregnancy you’re in, including postpartum, the influenza vaccine is perfectly safe for you. It’s also safe for your baby, and you should get your new kiddo vaccinated once they’re six months old—young children die during flu season every year, and the shot makes kids less likely to contract severe, life-threatening forms of influenza.

You need to get a new shot this year

The flu shot changes a little bit almost every year, which means you need to get a new vaccine every year too. For the 2018-19 season, there’s an entirely new strain of influenza B included in the shot that we’ve never seen before. Though you might have some residual immunity from any strains you saw last year that are re-circulating this year, you’re unlikely to have seen this one before. And that’s exactly why we have vaccines—so you can expose yourself to the virus before it reaches you.

It doesn’t really matter which shot you get, but the nasal spray isn’t a great option

The CDC doesn’t recommend one shot over another, but some hospitals are reporting that they’re focusing on the egg-free vaccines this year. There’s some limited evidence that egg-based vaccines are slightly less effective because viruses grown inside eggs tend to accumulate genetic mutations, thus creating a mismatch between the viruses circulating in the population and the viruses inside the vaccine. It’s not clear yet how much better the egg-free version might be, but if you’d prefer to get that version you can request it at your doctor’s office or at a pharmacy.

The only shot that some organizations, like the AAP, occasionally recommend against is the live attenuated influenza vaccine, which you may know as the nasal spray. Evidence suggests that version is less effective than the inactivated version. Of course, the CDC notes, the most important thing is for the maximum number of people to get vaccinated—the nasal spray is better than nothing for most people. Pregnant people, kids younger than two, and adults over 50 shouldn’t get the live attenuated shot, but most other people are okay (check out the full list here).

There’s nothing more to say here except that you should not wait to get your flu shot. Go now. Go to your local pharmacy and ask for one. You won’t have to wait in long lines or anything because most people won’t have even started thinking about the flu yet. Go get vaccinated. Don’t wait.