An exhaustive account of how the flu destroys your body

The virus doesn’t cause nearly as much misery as your body’s immune response to it. 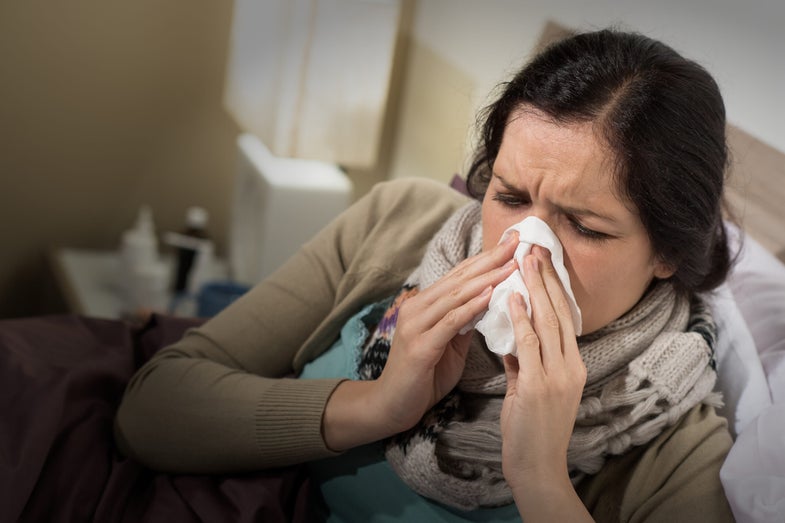 This year’s flu season is pretty scary. To try to combat and minimize the effects, public health officials are still urging anyone who hasn’t yet gotten their flu shot to get one as soon as possible. However, even if every single person got a shot in the arm, the vaccine—with its excellent 36 percent effectiveness—would not prevent everyone from getting infected with the notorious virus.

Unlike most common colds, strains of the influenza virus can cause symptoms all throughout the body. And when you’ve got them, they can be pretty alarming. Knowledge is power, so here’s what goes on in your body when you come down with the flu.

The influenza virus primarily attacks your respiratory tract: your nose, throat, and the tubes that lead to your lungs. So symptoms like a runny nose, a phlegmy cough, and a sore throat all make a lot of sense. But the flu is so much more than that. Though other organs in the body are not the primary target, the virus still has an effect on them. Your muscles ache, your head hurts, and your appetite goes down, among other things. Ironically, almost all of these symptoms have less to do with the virus itself than with your immune response to them. Unfortunately, the very defense mechanisms you have in place to get rid of the flu are the reason you feel so miserable as you recover.

The virus usually enters through your mouth, typically by way of your hands—most people touch their faces a lot throughout the day. But it takes a few days for symptoms to set in. Once inside you, the virus makes a beeline for your respiratory system and binds to the cells that line those areas. The virus then hijacks those cells’ natural mechanisms for replicating and uses them to create even more flu viruses in your body. While this process might cause some harm to your respiratory tract, it’s nothing major, and nothing like the symptoms that typically accompany a bad or even mild case of the flu.

The real fun starts when your immune system begins to fight. This begins as soon as the flu virus starts to replicate. Your immune system comes in two parts: the innate system and the adaptive. The innate immune system is essentially an all-purpose tool. As soon as your body senses the presence of any injury or invader, the innate immune system launches into action by producing tiny proteins called cytokines and chemokines. The cytokines reproduce almost immediately and start to attack the virus. This increase in immune cells creates an overwhelming inflammation throughout the body that makes you start to feel funny. But the worst is still to come.

Simultaneously, the chemokines work with the adaptive immune system to help create T cells. These cells are a special type of white blood cell that work in a much more specific way: They find the influenza virus, identify what’s special about it, and create a unique molecule on their surface that finds and destroys similar invaders.

The influenza virus has already started its own rapid replication by the time this process gets started, so the adaptive immune system must generate a lot of T cells to wage a proper war. This massive production of T cells that infiltrate your lungs, throat, and nose cause inflammation, swelling, and pain. In your lungs, the mucus that accumulates from the inflammation itself causes you to cough constantly as your body works to clear airways. And because your lungs are now damaged and vulnerable, you have a greater chance of acquiring pneumonia from an opportunistic strain of bacteria.

But what about the whole-body aches and pains, not to mention the fever that keeps you pinned down to the couch under a hefty load of blankets? That’s also your immune system at work. All those proteins—the cytokines and chemokines—travel through the bloodstream, which makes its way to every organ system in the body. Once they get there, the inflammatory proteins affect the way many of those organ systems function, causing symptoms of the flu. For example, the aches and pains that make you feel like you just ran an endurance run, researchers believe, occur because the cytokines induce the breakdown of muscle proteins. Researchers think this breakdown is likely beneficial, because many of the resulting amino acids help to create and strengthen parts of the immune system.

As for the awful fever and chills, you can thank those cytokines again. And one specific type, interleukin-1, might be the main culprit. These cytokines are seemingly able to cross the semipermeable network of capillaries that connect the brain to the rest of the body (known as the blood-brain barrier). Inside the brain the cytokines reach the hypothalamus, your body’s thermostat, and interfere with its functioning to crank up the temperature. Once an increased temperature is induced, the hypothalamus responds by telling the body to shiver and restricting blood vessels, as well as creating an overall feeling of chilliness.

A fever is incredibly rare in adults with colds, but almost certain in a person with the flu. This isn’t true for young children however, especially infants, in which at least a mild fever frequently accompanies a cold. Researchers are still pretty unclear on whether a higher body temperature itself actually provides any benefit, but it’s at least a sign that your body is fighting its invaders.

Researchers think this systemic release of cytokines into the bloodstream directly influences other flu symptoms, like severe headache and a lack of appetite, though their mechanisms aren’t as clear.

It’s strange to think that almost every awful symptom you feel during the flu is the result of your own body attempting to attack it. But consider what would happen if your body didn’t react this way. You wouldn’t get the nagging cough, the aches and pains, or even the persistent fever. Instead, the flu virus would continue to replicate and slowly destroy the lining of the respiratory tract—or worse, allow bacteria to cause pneumonia and destroy it first. And since you need your respiratory tract to live, you might not survive to tell the tale. So if you do end up coming down with the flu and feel those aches and pains coming on, know that it’s the only way to get better. And keep an eye out for a steady recovery followed by a sudden downturn; that’s a common sign of pneumonia, which is how most flu fatalities occur.