Here's what we can learn. 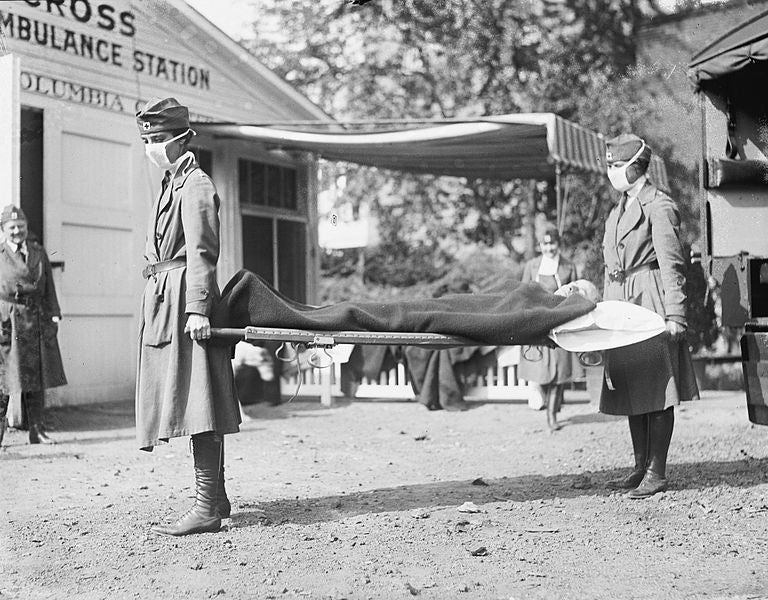 The Spanish influenza was unusual in more ways than one. There’s its universality: Between 1918 and 1919, the particularly aggressive H1N1 virus infected 1 in 3 people on planet Earth. Its severity: The flu killed approximately 50 million. And its invisibility: Today, historians often describe it as a “forgotten” pandemic.

In some ways, they’re right. There are no monuments to the victims. There are no classic works of literature inspired by the disease’s rapid advance. In other ways, though, they’re wrong. How forgotten can a pandemic be if there is an entire PBS documentary about it?

After reading countless contagious articles, visiting a virulent exhibit the Museum of the City of New York, and attending infectious events from the New York Academy of Medicine, a simpler, and much more compelling theory, emerged: The Spanish influenza is not “forgotten,” so much as no flu, no matter its impact, is ever really remembered.

Under an electron microscope, the chaos of any pandemic is reduced to a single strand of pathogenic RNA. Flu viruses are mixed from two key ingredients: hemagglutinin, a substance that causes red blood cells to clump together, and neuraminidase, an enzyme that breaks down specific acids. Scientists have identified 18 “H”s and 11 “N”s swirling in an earth-sized ether of bird feathers, pig stys, human snot, and bat guano. When one H meets one N, the resulting crossover hit sounds like a Dewey decimal number, but is in fact a deadly union.

In the case of the Spanish influenza, every victim was felled by an unusually lethal combination of hemagglutinin-1 and neuraminidase-1, or H1N1 for short. It didn’t knock off the usual suspects back in 1919. The very young and very old—typically the first to fall in such an outbreak—were not immune, but the Spanish flu had an unusual thirst for the blood of ostensibly healthy adults. Half its victims were between 20 and 40 years old, whose healthy immune systems ultimately worked against them. They died gruesome deaths: bleeding from their mouth and eyes, bodies blackened by a lack of oxygen.

Several theories have been posited as to why the Spanish flu just didn’t stick as a historical moment. That it charged across the continents while World War I was underway couldn’t have helped. Wartime censorship gave the flu its name; the Spanish press were one of the few free to document the disease’s spread. But it also stifled early understanding, and limited people’s opportunity to prepare. Perhaps forced silence, when coupled with quarantines, school closures, and bans on public gatherings, meant the true extent of the devastation did not make itself felt. Or maybe survivors felt the Spanish influenza so acutely few wanted to discuss it again.

But our flu-blindness has persisted, long before the Spanish influenza extinguished itself. The next pandemic, which admittedly killed only 1.1 million people, cropped up in 1957. Another flu, equally deadly (or equally not deadly, depending on how you look at it) followed in 1968. Most recently, the same viral strain that brought us the Spanish flu encircled the world in 2009, in a much-less-deadly pandemic colloquially known as “swine flu”. According to the U.S. Centers for Disease Control and Prevention, 60 million were infected in the United States alone. (Fortunately, fewer than 13,000 died.) While few who lived through the swine flu outbreak “forgot” it, but it’s not necessarily the first story we plan to tell our grandchildren.

Our sense of urgency is further diminished for seasonal flus. The strain varies, but you can practically set a watch on the virus’ appearance. As a result, regular ol’ flu season doesn’t typically receive the attention—or total freak-out response—its pandemic cousin reliably drums up. On average, the CDC reports, fewer than half of Americans get their flu shot. Those who do, CDC data suggests, do so because they understand the flu’s behavior, and have been sick with the flu or seen a love one sickened by it. By contrast, 28 percent of those who go unvaccinated do so because they feel a vaccine is unnecessary, according to a report from RAND. Others believe the vaccine isn’t effective.

This later group is right—in some small way. The flu vaccine ranges in effectiveness from 19 to 60 percent on any given year. The reasons are manifold: Viral strains worth safeguarding against are picked far in advance of flu season; the drugs are developed in eggs, which build different molecules in response to disease than humans; and manufacturing isn’t easy, either. Doctors still advocate for patients to get the vaccine, though, because any protection is better than none, and some evidence suggests that while the shot may not prevent you from contracting the illness, it could make the disease less severe. But that’s the thing: if we took flu seriously, recognized its power to decide our fate, even 60 percent efficacy would definitely seem like something worth standing in line at CVS for.

Our blasé attitude toward the flu can have incredible consequences. Last winter, according to a new a analysis from the CDC more than 80,000 Americans died of the flu. That’s roughly twice the number of people who died from car accidents, and 79,998 more than have died from ebola in the United States ever. And this wasn’t a novel strain of influenza. It wasn’t a pandemic. It was just good ol’ H2N3, that regular, otherwise unremarkable horseman of the seasonal flupocalypse.

Increasing access, especially for people who don’t have access to regular healthcare, is an ongoing battle in the war against flu. Prioritizing funds for flu research—and not just scary but rare diseases—matters, too. As for apathy, education is essential, according to public health officials. Knowing, for example, the difference between the potentially-life threatening symptoms of the flu from the usually-harmless cold is a good place to start. And history really is a great guide.

The lessons of the Spanish influenza are as relevant as ever. Public health officials have learned how to get the message out about all manner of disease. Doctors know better when and where to intervene, in theory preventing the complete erosion of social order. And scientists have developed vaccines, which, though imperfect, help countless people to stave off the worst of this disease. But all of these advancements are useless, unless we remember that, when it comes to the flu, we tend to forget.