Can my dog get me sick?

It’s possible, but it’s not the most likely culprit. 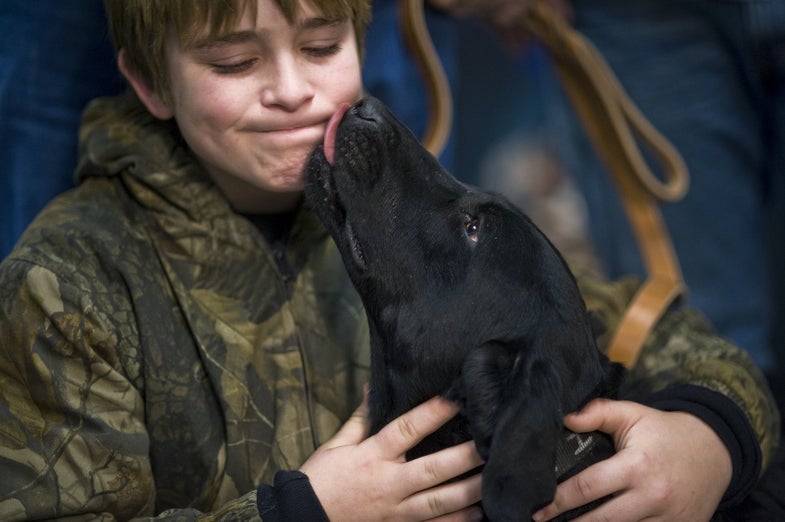 Dog licks are the best, especially when your pup is vaccinated. Pixabay
SHARE

Unfortunately for us, the line of disease transmission does not end with germy children and coughing colleagues. Dogs, cows, mosquitos, ticks, mice, sushi, your neighborhood cat lady’s beloved roving Romeo—the list goes on—are all opportunity for disease. But why? How does one disease affect multiple species? Aren’t we all too different?

Not at all. Infectious diseases arise from contact with parasites, bacteria, and viruses. While many diseases are species specific, like a dog-specific cold virus, others, such as the influenza virus, are able to mutate and insert pieces of DNA from other organisms into themselves. If they gather enough DNA from one species, this enables them to invade and infect that animal. These illness-causing organisms move from one species to another so often that we’ve even created a name for them, zoonotic diseases. The diseases can spread directly from one infected species to another or they can live inside another species, an intermediate host, who isn’t susceptible to the infectious organism but interacts with other animals that are.

New zoonotic diseases (or at least ones that we had never heard of) pop up all the time. Consider this case: In February’s American Journal of Tropical Medicine and Hygiene, researchers reported on a 26-year-old woman whose irritated eye prompted her to, with the help of a mirror, identify and remove a small, translucent worm from inside it. She then went to a doctor who pulled out 14 more. The perplexed MD sent the tiny crawlers to infectious disease experts at the Centers for Disease Control who later identified the microorganisms as Thelazia gulosa, a type of nematode worm. The young woman’s case turned out to be the first reported one of this particular organism (which usually infects cows’ eyeballs) infecting a human.

If that makes your skin crawl, there’s more bad news: Unvaccinated dogs are risks for rabies, kids’ sandboxes can harbor parasites, and if you’re west of the Mississippi, the prairie dogs you meet could carry the bubonic plague, says Susan D. Jones, a veterinarian at the University of Minnesota.

And the worst news: We’ll probably never be able to eliminate them for good. In many cases, breathing contaminated air, drinking infected water, or otherwise touching an infected animal’s feces can transmit viruses, bacteria, and parasites to you. What makes all this worse is the increasingly interconnected world we live in, which heightens the chances of infectious diseases spreading from one place to another, says Jones. The speed at which we are able to transport goods and livestock today means we can far more easily expose animals to diseases novel to them. And because of the high level of human involvement in all of this animal and goods handling and transferring, “it is impossible [to] completely remove humans from these kinds of infection chains,” says Jones.

Luckily, in the United States, the risk of acquiring one of these interspecies diseases from a household animal is fairly minimal. The majority of pets, like dogs and cats, are up-to-date on their shots. Those vaccinations protect both us and them from infectious diseases such as rabies.

“Vaccinating ourselves and our pets creates a sort of ring of immunity around us and a barrier to viruses circulating in wild animals,” says Jones. Researchers call this kind of disease protection, herd immunity. It’s why getting the flu vaccine is so important; it doesn’t just protect you, it protects those with weaker or still-developing immune systems like your grandmother or baby cousin.

So if it’s not our drooling, furry best friends, what animals, aside from other humans coughing and sneezing on us, are getting us sick?

Live animals (other than the family dog) and their poop is one source, but not the only one, says Muhammad Morshed, a zoonotic disease expert at the University of British Columbia in Vancouver. Improperly cooked or contaminated food can exact its revenge and turn a romantic date for two into a far less romantic tango with the toilet.

For example, raw foods, like sushi, can harbor parasites. To kill them off, distributors must freeze the raw meat at minus 25 degrees celsius before sending it along to its destination. When that doesn’t happen, a consumer can unwittingly eat one and become ill.

While you might feel like the victim sitting sick in bed, humans can also spread diseases to other species. In fact, the 2009 pandemic H1N1 flu was misnomered “swine flu”; the first recorded positive herd of pigs didn’t get the virus from a fellow swine, but rather from a sick employee who entered the barn. We humans can even infect sea creatures, Morshed says, as human waste routinely causes disease in unsuspecting aquatic creatures like dolphins who swim into clouds of our feces. For the crime of species-to-species disease transmission, all of our hands, hooves, paws, and proboscises are dirty.

However, there is good news. Experts are understanding zoonotic diseases far better than they have in the past. In the age of Louis Pasteur, researchers zeroed in on the singular bacterium, virus, or parasite, says Jones. Now researchers focus on infectious diseases as a worldwide ecological phenomenon. They focus on how all the microorganisms work together and fill particular niches. For example, by looking at the threat of disease more holistically, experts can pinpoint vectors such as mosquitoes that spread the diseases and study the environmental impacts that make transmission more likely.

“When scientists started to see diseases as being more of an ecology, I think that really helped science to understand diseases like malaria or West Nile virus,” says Jones.

And, despite the ubiquity of zoonotic diseases, prevention is possible. Jones says everyone can do his or her own part by getting vaccinated, keeping a healthy weight to boost the immune system, abstaining from smoking (which can dampen our body’s natural defenses), and regularly washing their hands. So don’t skip the sink—even if no one is looking. Your entire species will thank you.