FYI: How Long Would It Take Santa To Deliver Presents To Every Kid On Earth?

Not all that long if Santa knew how to stretch time like a rubber band! 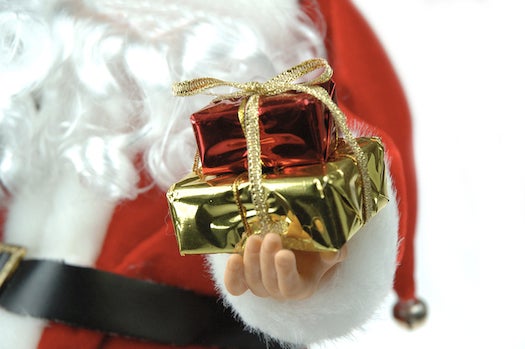 About six “Santa months,” according to Larry Silverberg, a professor of mechanical and aerospace engineering at North Carolina State University. He’s a Santa math specialist (really) whose students took on the problem.

Here’s how he got there: Santa has to deliver gifts to around 200 million children spread over 200 million square miles. Because each household has 2.67 children, there are about 75 million homes to visit and the average distance between homes is about 1.63 miles, Santa needs to cover 122 million miles.

To cover that distance in 24 hours on Christmas, Mr. Claus’s sleigh would need to travel at a whopping average speed of 5,083,000 mph. Silverberg argues that the feat is possible because the sleigh would have to travel 130 times more slowly than the speed of light, which is 300 million meters per second, or 669,600,000 mph. Because something already moves that quickly, it would be difficult, but not impossible, for Santa to travel at 5,083,000 mph.

Traveling at 5,083,000 mph seems a bit fast for a plump old man so Silverberg and his students found a more realistic scenario: relativity clouds. Relativity clouds, based on relative physics, allow Santa to stretch time like a rubber band and give him months to deliver gifts, while only a few minutes pass for the rest of us. (Silverberg theorizes that Santa’s understanding of relative physics is far greater than our own.)

Silverberg’s theory is plausible, says Danny Maruyama, a doctoral candidate researching systems physics at the University of Michigan. If Santa were to travel at about the speed of light, share the delivery work-load with his elves and makes use of relativity clouds, he would be able to deliver the presents in about five minutes Earth time, Maruyama says. “While I don’t know much about relativity clouds myself, I think it’s very possible that a man who flies in a sleigh, lives with elves, and has flying pet reindeer could have the technology needed to utilize relativity clouds,” he says.

And what if Santa deployed multiple sleighs? Silverberg says if Santa and his elves use 750 sleighs to deliver the gifts and, using their knowledge of relativity physics, take roughly six Santa months (to us humans, only 24 hours), each sleigh only needs to travel about 80 mph, a much more realistic scenario. “At 80 miles per hour, you just throw a couple jetpacks on either sides of the sleighs and you’re there,” Silverberg says.