The race to stop a killer, using acoustic monitoring and pheromone traps 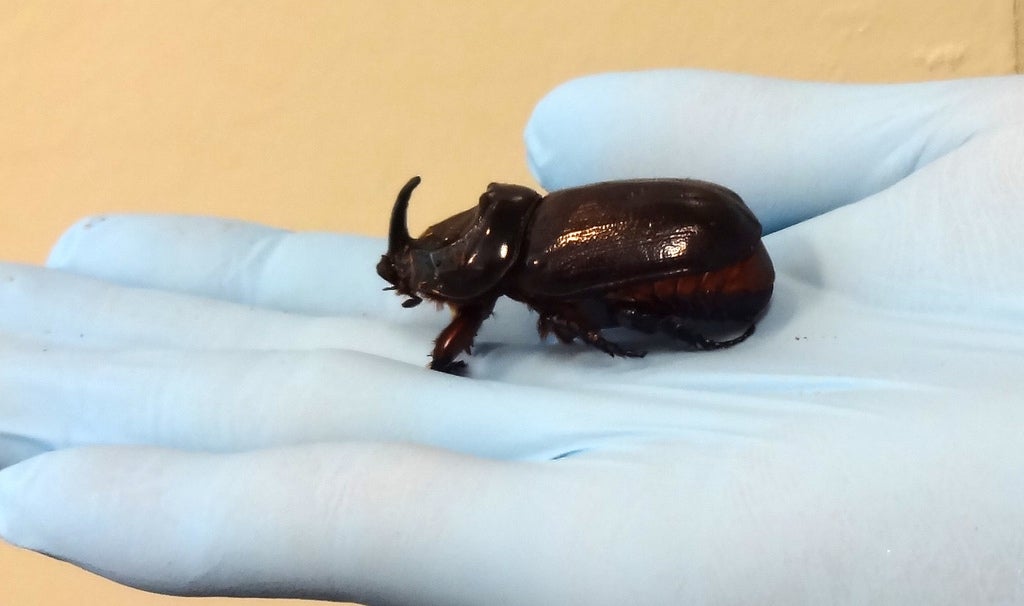 A coconut rhinoceros beetle can grow large enough to cover the palm of your hand. Easily identified by the long horn protruding from its forehead, this pre-historic looking beetle passes time gnawing geometric designs into the crowns of palm trees to feed on the delicate sap-filled tissue inside. Native to Southern Asia, these imposing insects are migrating westward.

No one knows exactly how the coconut rhinoceros beetle made its way to Hawaii, but state and federal officials are working hard to eradicate the giant pest before it inflicts significant damage. In 2007, the beetles destroyed an estimated 50 percent of the palm trees on the island of Guam.

“The beetles could have come from a variety of places including areas where they are deemed invasive or their native range in Southern Asia,” said Darcy Oishi, an entomologist for the Hawaii Department of Agriculture.

They were first detected just before Christmas in traps specifically designed to catch invasive insects around Joint Base Pearl Harbor-Hickam on the island of Oahu, Hawaii. The traps run on solar power and are equipped with UV light and a pheromone lure that’s attractive to nocturnal beetles. Since the beginning of the year, coconut rhinoceros beetles have been caught in over a dozen traps. 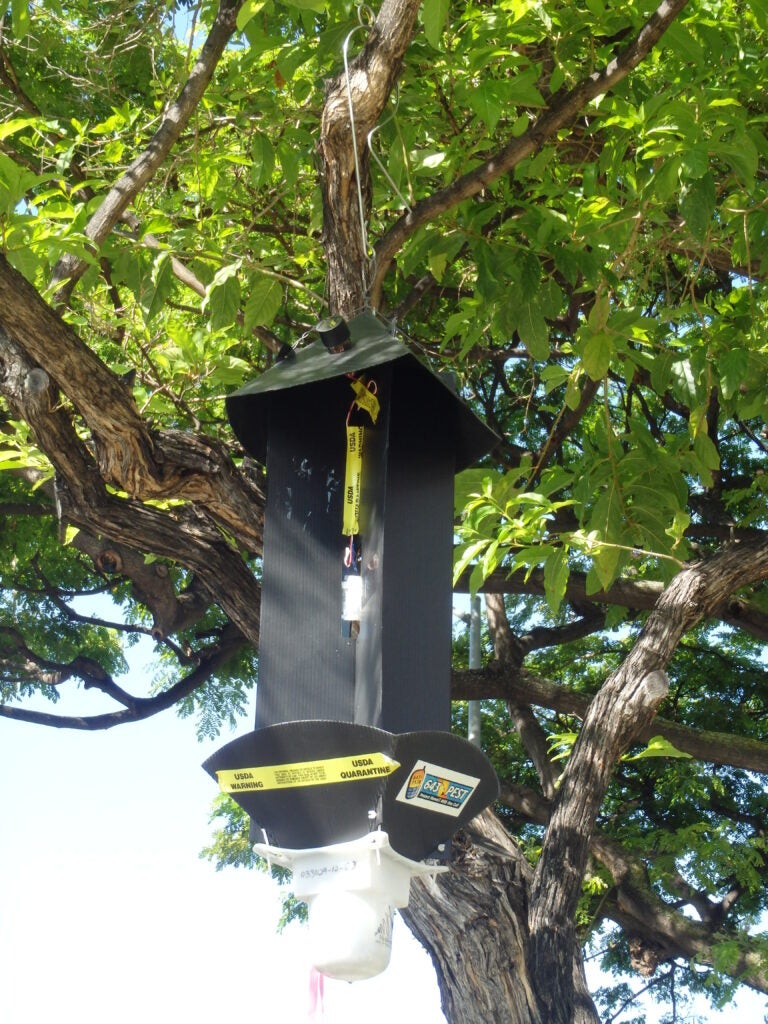 Officials initially identified a particularly productive breeding site in a mulch pile on the base’s golf course “but no additional breeding sites have been detected,” according to Rosenthal.

Officials are now in a race against time to quell the spread of the beetle, which can destroy palm tree, date palm, sugarcane and banana tree populations.

A potential method for detecting the beetles involves the use of acoustic monitoring devices to determine which trees are infested. Richard Mankin, an entomologist with USDA, previously employed sound and vibration detection devices to locate the beetle in Guam.

“There’s a number of insects like the coconut rhinoceros beetle that you can’t see when they get into tree trunks. For a long time we’ve been using sounds to detect these hidden insects, particularly to detect large species,” said Mankin. “For example, adults can communicate to attract mates, and larvae can be communicating inside a dead log about whether they are eating too close to each other.”

Advanced acoustic monitoring equipment can also detect vibrations using accelerometer sensors similar to those capable of deploying airbags after detecting vehicle impact. The sensors are approximately a thousand times more sensitive than those used in vehicles.

“While acoustic monitoring isn’t currently being used in Hawaii, it’s particularly effective because sounds and vibrations can be used to identify infested trees that need to be cut down or treated with systemic insecticides,” said Mankin. “Otherwise, if you are trying to eradicate an infestation, you might have to cut down all the host trees just in case.”

In Guam, acoustic monitoring worked effectively to locate invaders but not enough was done to eradicate the insects after detection. As a result, the beetles spread to most areas of the island and now the invasive population is controlled through community efforts. For example, Guam residents are educated to chip up and burn dead trees, an ideal breeding ground for the beetle’s larvae.

In Hawaii, trapped coconut rhinoceros beetles are destroyed in compost bins heated to temperatures between 140-180 degrees Fahrenheit. The heated decomposition process produces ammonia, which kills the beetles. HDOA and APHIS are also working to develop a long-term federally funded eradication effort, which may include the controlled introduction of biological predators like a fungus that’s known to attack the beetle.

Whatever the final plan, the lesson from Guam is clear. Officials must implement a comprehensive detection and eradication effort quickly to avoid devastation of a sensitive island ecosystem and a culture so tied to the palm tree.