On September 11, 2001, the World Trade Center transformed from a pair of gleaming towers into a carcinogenic pile of... 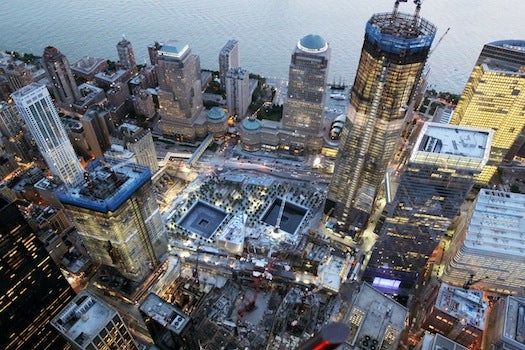 A view of the entire construction zone, with the Hudson River at the top of the photo. Getty Images: Mario Tama
SHARE

On September 11, 2001, the World Trade Center transformed from a pair of gleaming towers into a carcinogenic pile of smoldering rubble that’s still killing people. Currently rising out of that rubble, though, is a complex with the most environmentally advanced technologies ever attempted at the scale.

Click to launch a gallery showing the World Trade Center complex under construction.

LEED (Leadership in Energy and Environmental Design) Certification is an internationally-recognized third-party verification system developed by the U.S. Green Building Council to confirm that a building—or community, for that matter—was designed and constructed with the aim of improving energy savings, water efficiency, CO2 emissions, indoor environmental quality, and intelligent resource management.

For the new WTC complex to qualify for the LEED Gold Certification—the second highest attainable below Platinum status—it must meet a number of requirements, among which include achieving a Net Zero CO2 footprint for all base building electricity consumption and reduction of the complex’s energy consumption to 20 percent below New York State’s energy code requirements.

“The building [in this case, 1 World Trade Center] is designed to achieve a gold level certification. Which, for a project of its size, would be a first of its kind, Eduardo Del Valle, Director of Design Management at 1 World Trade Center, told us. “Now, there are some other projects in New York City that have achieved a Platinum certification, which is the highest—but not on this scale.”

One means of achieving these goals is “Daylighting”—which thankfully involves neither Bruce Willis nor Cybill Shepherd. Instead, as Del Valle points out, “if enough daylight is coming into the window it automatically dims the interior lights. It’s all about reducing energy consumption. Every space within 15 feet of the facade will be equipped with dimming devices.”

This practice not only benefits the WTC complex’s energy consumption, but the occupants of the towers as well, increasing productivity and reducing the rate of minor illnesses, as well as promoting bone health and increase the activity of natural killer cells simply by improving the quality of light. Because humans require exposure to UVB light in order to synthesize Vitamin D, the dimming of artificial lights and use of ultra-clear glass to allow more natural light in.

When the sun isn’t shining, the WTC complex employs hydrogen fuel cells to provide approximately 1.2 megawatts of power and steam turbines which, according to DelValle, “take the wasted steam that happens during steam generation and converts that into electricity.”

During construction, the complex is requiring its contractors to use only ultra-low sulfur diesel fuels—a “clean diesel” that reduces nitrogen oxide and particulate emissions and is considered one of the cleanest (comparatively speaking) fuels available. This implementation is so effective that New York City and State now require that non-road construction equipment used on public construction projects by public agencies use ULSD. In addition, all construction vehicles are equipped with extra particulate filters to further reduce their impact. Finally, the materials used in the complex cannot include any Volatile Organic Compounds (VOC)—a variety of chemicals that leach from building materials in gaseous form with both short- and long-term health effects.

After construction is complete, Del Valle states that, to further improve indoor air quality, they’re going to watch it like a cybernetic hawk:

“CO2 monitors control ventilation and make the building healthier and improve indoor air quality. If the CO2 sensor sends a signal to the air handler software, telling it you need more fresh air in a certain space because there’s more CO2 than there should be, it automatically increases the fresh air mix coming into that space. We have over 3,000 points of monitoring.”

In addition, the WTC will improve the air of the greater Manhattan Financial District by reducing the amount of vehicular traffic in the area by providing ample public transportation access and extensive facilities for bicycle commuters.

It rains in New York City, on average, 60 inches a year—second only to Miami. Rather than simply let this precipitation run off the buildings and into storm drains, the WTC will collect and store that rain water for later use in its new high-efficiency evaporative cooling towers and for irrigating greenery within the 16-acre complex. (Since it hasn’t been treated, the harvested rainwater cannot be used as a potable source.) 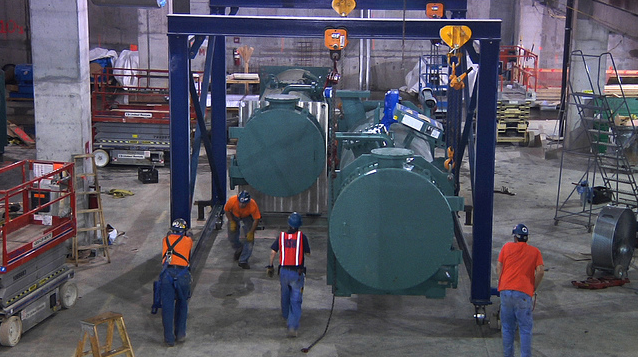 New York, as with most areas of the country outside of the confines of Northern California, requires significant air-conditioning service throughout the year. The occupants of the new WTC complex will stay frosty in even the muggiest of Autumnal weather thanks to the new and highly efficient 12,500-ton Central Chiller Plant (CCP) that uses water from the Hudson River to cool the WTC Transportation Hub, National September 11 Memorial and Museum, retail space and other non-commercial areas.

Located in the far Southwest corner of the complex—roughly in the same area as the previous plant—the CCP employs water extracted through the River Water Pump Station (RWPS), on the other side of the West Side Highway, to chill (and heat, during the Winter) water for distribution to the rest of the complex.

It will circulate 30,000 gallons of river water every minute. That’s enough to fill 750 bath tubs, flush 10,000 toilets, and cool the same amount as approximately 2,500 home air-conditioners.

“It uses the Hudson as a way of both dissipating heat and preheating water,” Del Valle explained. “Because water below a certain depth is a pretty constant temperature (about 45-50 degrees Fahrenheit), so what happens is, during the winter it takes less energy to heat and circulate it, and conversely, in the summer it takes less to cool it.”

The new World Trade Center is already 75 percent old. Everything from the gypsum boards to the ceiling tiles contains a minimum of 75 percent post-industrial recycled content. This reduces the environmental footprint, not only on-site, but reduces the stress on the natural resources and energy needed to produce them.

At the same time, the WTC construction project recycles an incredible 80 percent of the waste generated at the site. According to Del Valle, “We’ve exceeded our original target by about 20 percent. The contractors have been really good, we’ve been watching and documenting how the material is recycled and sent back to the plants. It’s really a cycle that’s feeding on itself.”

_Monster Machines is all about the most exceptional machines in the world, from massive gadgets of destruction to tiny machines of precision, and everything in between.

A civilization can distinguish itself by how well it responds to disaster, and 10 years later, 9/11 is as much a story about recovery and rebuilding as it a story of terrible loss and tragedy. As a nation, our political and economic response has been imperfect—possibly even dead wrong—but we’re focusing on the mechanical marvels that have helped us bounce back._ 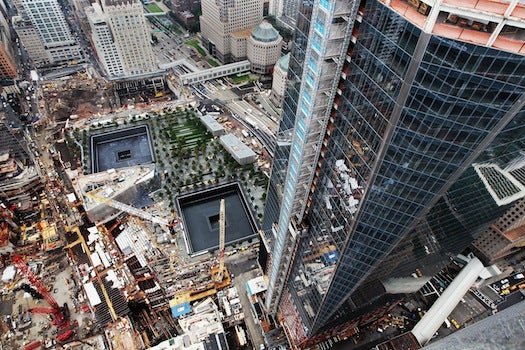 In this picture, taken by the inestimable Mario Tama (who was a major figure in American Photo’s amazing look at the 9/11 photographers–read more about it here) you can see the twin reflecting pools down below the towers. 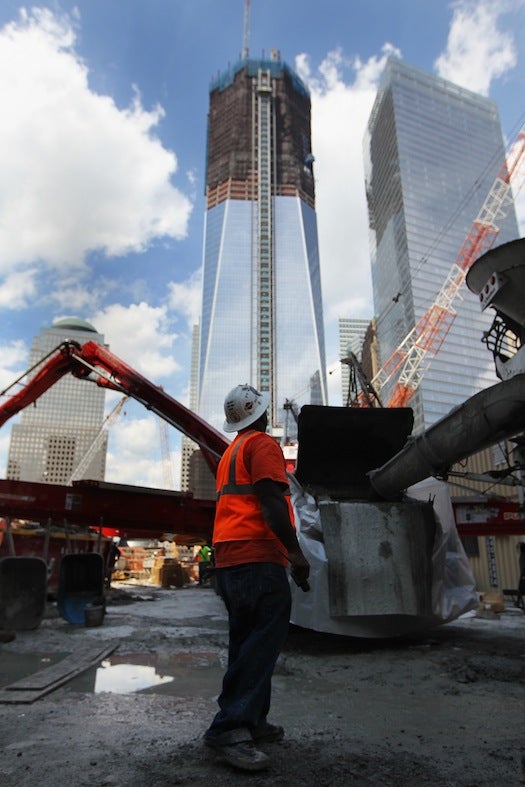 The building rising behind this New York construction worker is One World Trade Center, which is destined to achieve a gold level certification from LEED (Leadership in Energy and Environmental Design).

A view of the entire construction zone, with the Hudson River at the top of the photo. 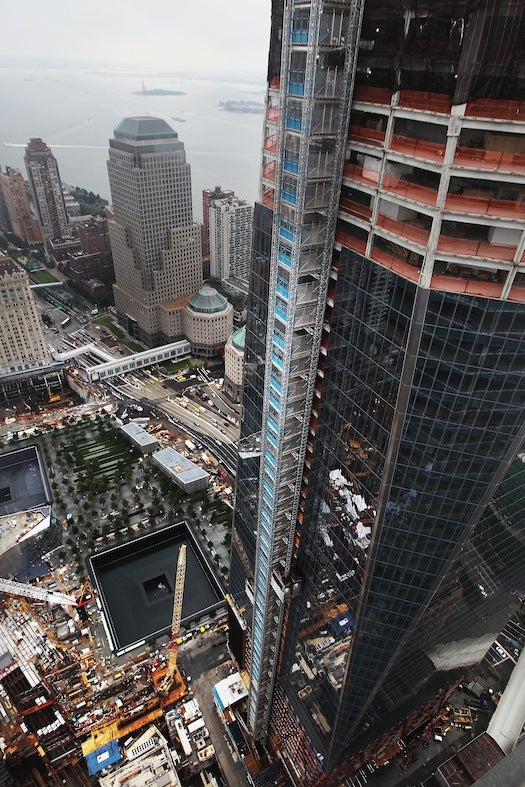 Upon completion, One World Trade Center will be New York’s tallest skyscraper, topping out at a symbolic 1,776 feet, with 3 million square feet of office space. 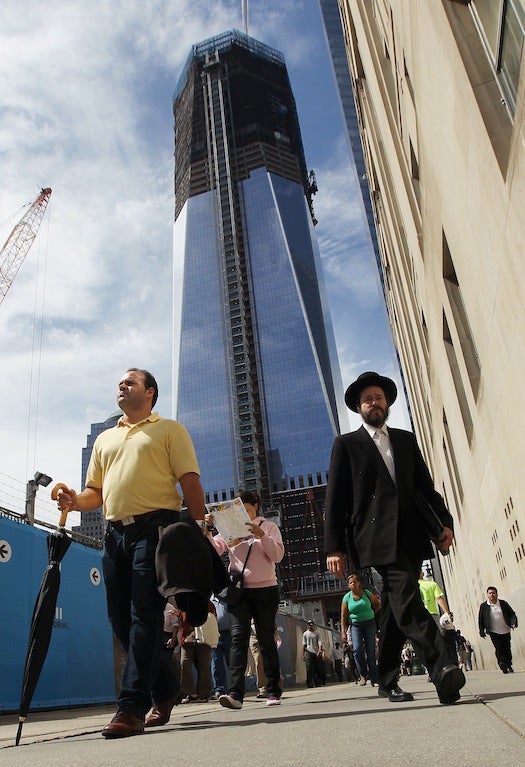 New Yorkers in downtown Manhattan walk through the construction zone, with One World Trade Center looming above. 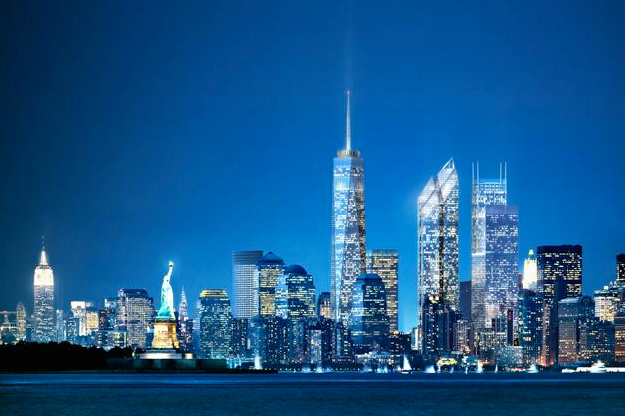 An artist’s rendering of the future World Trade Center Complex at night.