Russian Cosmonauts Report Sea Plankton On The Outside Of The ISS

NASA has not confirmed the findings. 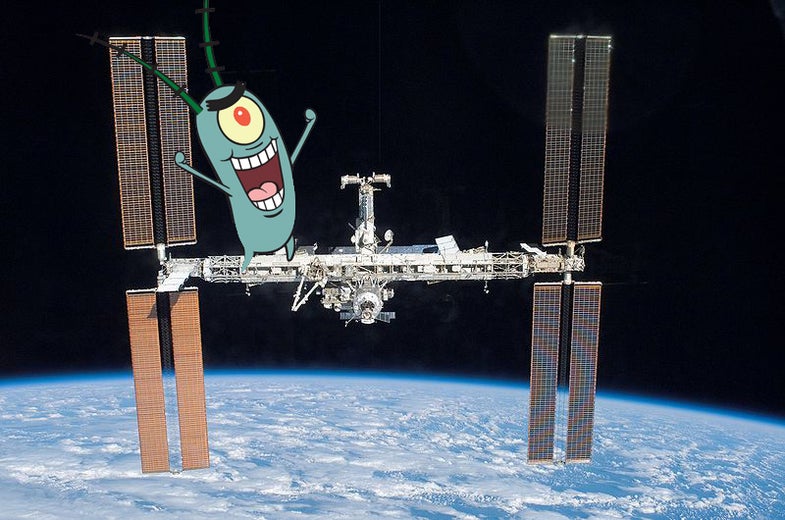 Although only about three to six astronauts live on the space station at a time, each of those astronauts brought up millions or billions of microbes. Kasthuri Venkateswaran from NASA's Jet Propulsion Laboratory has been sampling the space station to see how the structure's microbiome evolves over time. Launching with SpaceX next week will be the third installment of the experiment. The test will use DNA analysis to determine how microgravity, radiation, and a limited human presence influence the bacterial population. The research could help curb any potentially harmful bacteria that might arise during long-term human spaceflight, and "if there are beneficial microbes living there that are different from the Earth," says Venkateswaran, "that can be exploited to our benefit.". Popular Science/NASA/Nickelodeon
SHARE

Cosmonauts have apparently discovered plankton and other microorganisms on the outside of the International Space Station’s windows, according to an announcement from a Russian official. NASA has not yet confirmed or denied the findings.

The Russian cosmonauts allegedly found the plankton during a routine window cleaning. The plankton were not visible to the naked eye––a machine detected the particles when it analyzed the contents of the window wipes.

It’s not clear whether the plankton were living or dead, but there is evidence that microorganisms can survive the freezing conditions and harsh radiation of space.

Scientists also don’t know how the microorganisms could have strayed so far from home, but theories abound. It’s possible that the plankton rode up with the parts of the ISS as it was being assembled in the late 1990s; that they were carried up during a resupply mission; or, maybe they were living inside the ISS and escaped during a spacewalk. The Russians are positing that the microbes floated up on air currents … which is actually not entirely crazy, since scientists know that bacteria live in Earth’s upper atmosphere.

Or maybe the plankton are actually ALIENS sent to destroy humans. Just kidding. But if the findings are confirmed, they could have major implications in the search for life on other worlds.

We’ll keep you posted as more details come to light.