Firefighters work to bring a dozen blazes under control. 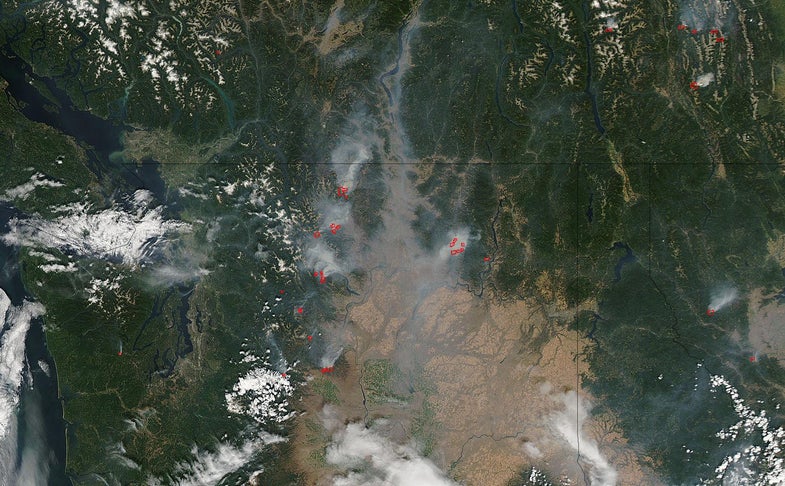 This image, taken by equipment on NASA's Aqua satellite on the evening of August 11, 2014, shows a dozen wildfires burning across the state of Washington (as well as a couple in Montana to the far right). NASA Rapid Response MODIS
SHARE

Plumes of smoke from a dozen wildfires hovered over a wide swath of Washington state this weekend, as seen in this image captured by NASA’s Aqua Earth observation satellite around 9 p.m. on August 11. Most of the fires were touched off by lightening strikes on July 14 and August 2.

One of the fires that began in mid-July — dubbed the Carleton Complex, in north-central Washington — spread into the largest wildfire in the state since record-keeping began. The Carleton Complex has burned 256,108 acres of federal, state and private forest lands. Hundreds of people fled area towns at the fire’s peak in late July; one resident of Pateros, Wash., described the blaze as “a funnel of fire.” As of yesterday, close to 1,000 firefighters — including a crew of hotshots — have been working on the fire (down from around 2,000 in late July), which is now considered 100 percent contained_,_ according to the joint agency Incident Information System.

This year’s burning season in the western states has so far been the quiestest in a decade, as reported by The Daily Climate, with around 1.7 million acres burned compared to an average of 4.4 million for the prior nine years. But the National Interagency Fire Center reports that wildfire potential remains high (PDF): Temperatures in the western states are 2 to 4 degrees Farenheit warmer than the norm overall, and in some places, 6 to 8 degrees above normal, with extraordinary drought in California, western Nevada, and the Texas Panhandle. The governors of California, Oregon and Washington have all declared states of emergency this summer, which empowers them to call up the National Guard to help fight wildfires.