Japan May Scale Back Its Space Ambitions After Probe Misses Venus

The failure of a Venus probe to reach orbit last week will likely prompt the Japanese space program to take... 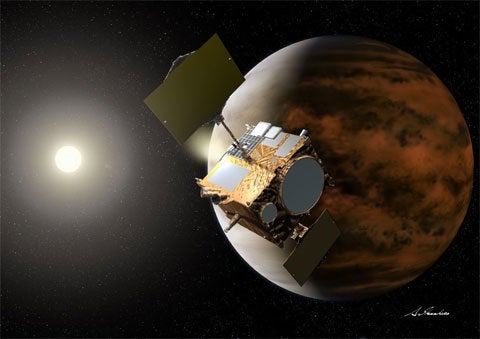 The failure of a Venus probe to reach orbit last week will likely prompt the Japanese space program to take a more cautious tack, according to scientists attending the American Geophysical Union fall meeting this week. The Akatsuki probe — meaning “dawn” in Japanese — is shedding light on the perils of space ambition on a shoestring budget, according to Space.com.

“Our score is zero wins, two losses,” Takehiko Satoh, of the Japan Aerospace Exploration Agency (JAXA), told Space.com last week. “We have to be more conservative to plan our next planetary mission, so it will never fail in any aspect.”

After a nearly eight-month journey to the second planet, Akatsuki was supposed to fire its thrusters for eight minutes Dec. 6 to insert itself into orbit around Venus. But a pressure drop in the fuel line caused them to burn for only two and a half minutes, and the probe overshot the planet. Mission managers don’t know what happened to cause the pressure drop, Satoh said. They hope to try again in six years, the next time Akatsuki will be close enough to try an orbital insertion.

Meanwhile, it’s a second interplanetary setback for the space agency, JAXA, which tried a Mars mission in the late 1990s but abandoned it after several problems.

Despite a budget many times less than the U.S. or Europe, Japan has set high goals for space exploration, including a lunar bipedal robonaut by 2015 and a robotic moon base by 2020. But the Akatsuki miss will likely prompt more conservative missions in the near future, Satoh said.

On the other hand, Japan’s Hayabusa mission shows it’s also possible to achieve great success after expected failure. Hayabusa survived damage from a massive solar flare, problems with its thrusters, landing issues and communication problems that forced a three-year delay in its return to Earth, but in the end, it successfully brought asteroid dust back home — the first samples returned from a celestial body other than the moon.