Why the Navy is getting fast new medical ships 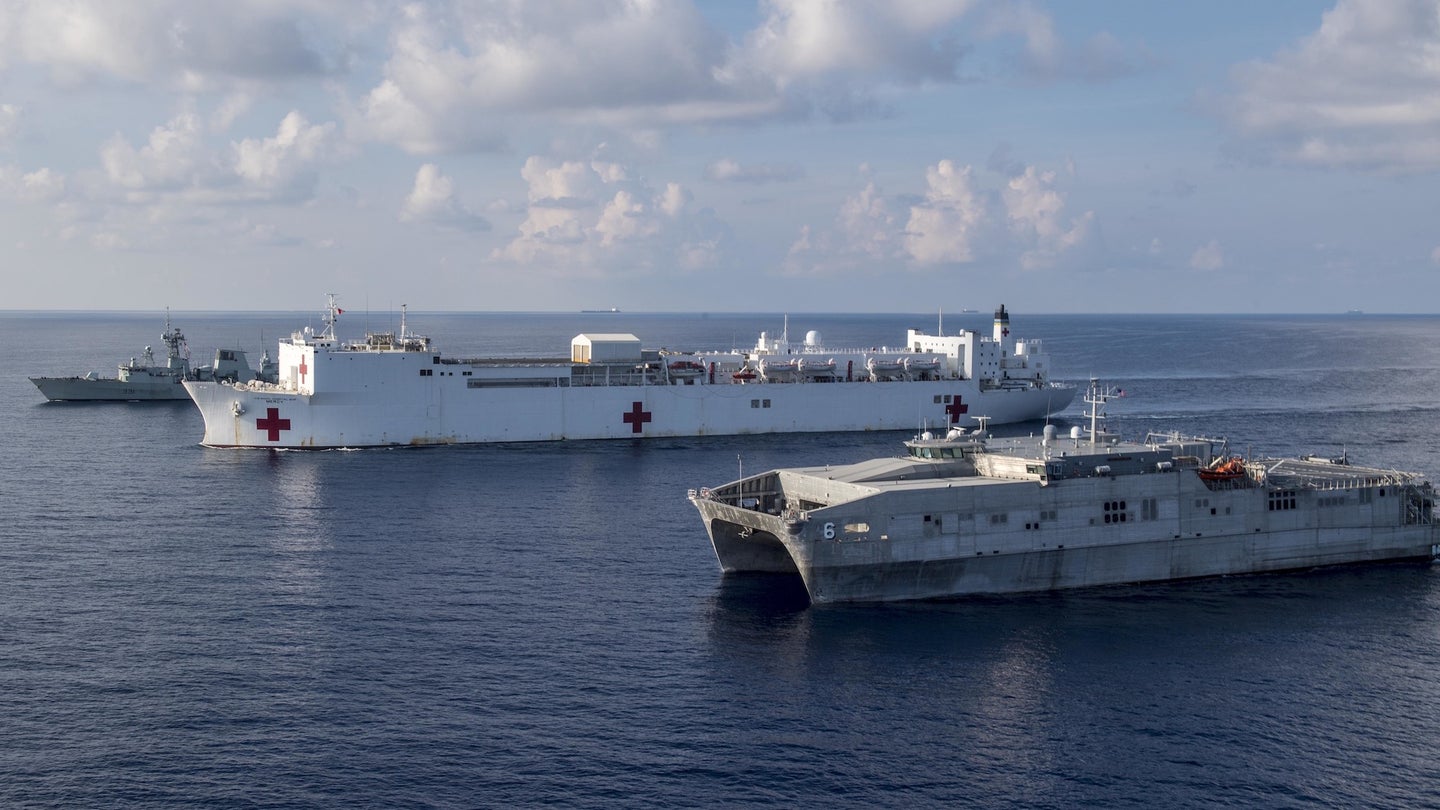 In the center is the USNS Mercy, while in the foreground is an expeditionary fast transport ship. US Navy / Kelsey L. Adams
SHARE

This post has been updated with additional information. It was originally published on January 17.

The US Navy is adding more medical vessels to its fleet, to better meet the needs of the force across theaters. The next produced Expeditionary Fast Transports, a vessel type already in production, will be built with modifications to serve as medical ships when needed.

After the medically modified transports are constructed, the next ship built will be a new dedicated medical vessel. This Expeditionary Medical Ship will be designed to offer medical care where larger hospital ships cannot go. Before the Navy builds this newer class, it will learn to fill the role by adapting a familiar frame.

Tucked away in the Navy’s 2023 Justification Book, a document that outlines the why and what of its budget requests, are two notes about the medical adaptation of these ships. Expeditionary Fast Transports (confusingly abbreviated EPF) “will have modifications to conduct a Role 2 Enhanced (R2E) Medical Transport mission which will include enhanced medical capabilities to support embarked Medical Military Detachment (MILDET) teams while retaining the ability to perform high-speed intra-theater sealift.”

That means, in essence, that these will be medical-capable transports, but ones that can also do the workhorse job of moving people and goods from ship to shore and back.

The book also notes that after building a few modified transports, the next built “will be an Expeditionary Medical Ship (EMS) Variant,” which is the one that will be designed with medical care at the forefront of its mission.

“The ship’s builders and Navy officials say this reimagined vessel, the Expeditionary Medical Ship, is especially designed for easy movement and rapid response in the shallow littorals and vast expanses of a future operating theater like the Pacific,” reports Hope Seck at Sandboxx. “And the service is working to develop a complement of skilled medical personnel trained and ready to deploy onboard these ships to provide triage care almost anywhere in the world.”

The Navy has three of the EPF-template medical transports under contract, with funding secured for three EMS ambulance ships to follow, according to shipbuilder Austal USA.

To understand what sets these medical capable Expeditionary Fast Transports and the upcoming Expeditionary Medical Ships apart from existing medical vessels, it’s important to understand the hospital ships it is designed to augment.

Medical ships are an accommodation to the grim reality of war. Wherever the Navy goes, sailors will need medical attention, and those facilities can accommodate the various marines, soldiers, and other compatriots injured and within reach of a hospital ship. The Navy currently operates two large hospital ships, the USNS Comfort and USNS Mercy, which barged into public consciousness when deployed to render aid in the first waves of the COVID-19 pandemic in the United States. That aid rendered appears to have been less than expected, though not nothing.

Pandemic relief is an outlier job for the vessels, which are constrained not just by size but speed, making them most useful as a hospital that can be parked in a deep harbor or anchored offshore, treating patients as they arrive. The USNS Comfort in particular boasts a long record of surgeries at sea, in support of US and allied forces in the Gulf and Iraq wars. Both Mercy and Comfort have also been deployed for disaster relief, where the hospital ships trained personnel and stockpiles of blood make them a powerful resource for treating injury.

And both hospital ships were converted from former oil tankers, and fit into a long history of commercial vessels adapted into hospital ships. Converted vessels come ready-made, but they lack the dedicated military design features to accommodate specific military missions.

Getting the medical supplies from storage on a hospital ship to patients in need often, but not always, involves bringing the patients aboard. In 2016, researchers tested using drones to deliver blood from ship to shore, an approach that could help get aid to people injured and unable to reach port.

Hospital ships can also receive patients by helicopter, thanks to a landing pad. That kind of arrival is vital for the injured but limited in capacity for transporting large numbers of people to the care they need. With 15 patient wards, 80 ICU beds, and accommodations for 1,300 people, the Comfort and Mercy can treat the people brought to it, but they cannot get everywhere. And, with a top speed of 20 mph, they are slow going even in the best of times.

To get care closer and faster, the Navy has selected a smaller, faster ship in the ambulance role.

Smaller than full-scale hospital ships, the ships in the Expeditionary Fast Transport class are already expanding how and where the Navy can operate, by providing supply and transport support for the fleet. The EPFs can sustain an average speed of 40 mph at sea, twice as fast as the hospital ships, and they can operate in shallower waters and less developed ports, with a draft of only 15 feet. The ship’s catamaran design offers great stability, especially important for the difficult tasks of surgery and sea.

When it comes to moving people and goods, the existing EPFs can carry up to 544 metric tons of cargo, and beyond a crew of 41, can accommodate 416 passengers, with 312 of those in airline-style seats and 104 in more proper berths. As presently designed, the EPFs can land helicopters as large as the CH-53 Super Stallion.

In the envisioned medical role, beyond converting some of that space to treatment facilities, EPF maker Austal says that the landing deck will be enhanced to accommodate V-22 Ospreys. This, combined with 10 ICU beds, 23 ward beds, and two operating rooms, would make the ship able to function as a floating hospital in miniature, providing care to match the needs of the remote coasts it can access.

This article has been updated to include additional information about how many ships of each type will be produced.