Why Japan is betting on railguns for missile defense

Railguns are a fascinating type of weapon that can fire a projectile very quickly, although the US recently stopped working on them. 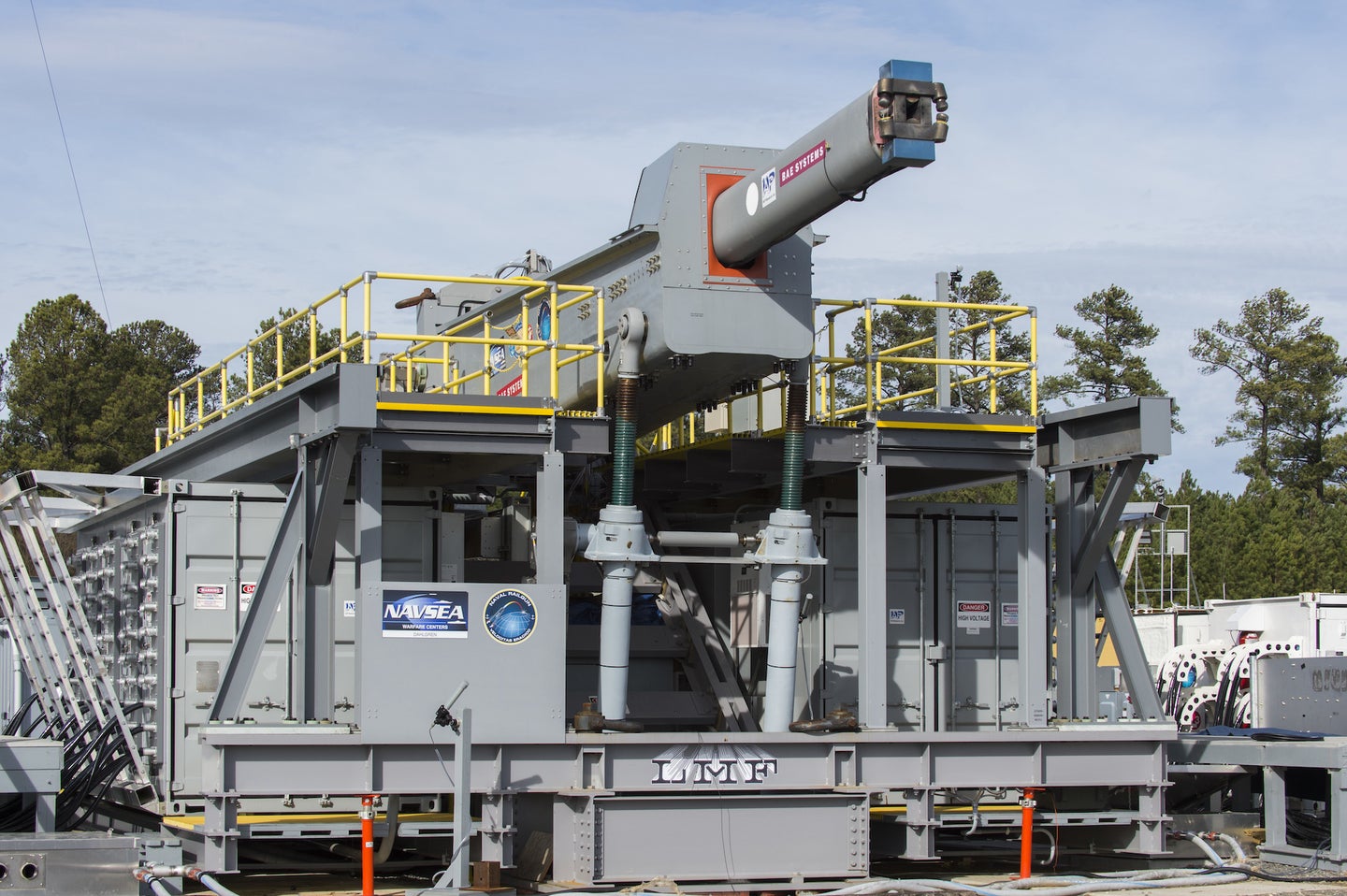 An electromagnetic railgun setup in the US in 2017. U.S. Navy photo / John F. Williams
SHARE

To protect against hypersonic missiles, Japan is turning to railguns.

Last week Japanese newspaper Nikkei Asia reported that the Ministry of Defense is hoping the successful development of a fast and accurate railgun will not just destroy missiles in flight, but will be so effective that it can deter the launch of those missiles in the first place.

“The Japanese Defense Ministry will develop a means to intercept hostile missiles using magnetically powered projectiles,” reports Nikkei Asia, “as the nation scurries to respond to the hypersonic weapons being developed by China, North Korea and Russia.”

Railguns, long the stuff of science fiction, have been explored and tested by militaries like the United States and China since at least 2008.

Here’s how Popular Science described a railgun after a Navy test in 2015:

A railgun works by generating a strong electromagnetic current that flows from one rail, through a U-shaped back end of the projectile, and into another parallel rail. This generates three magnetic fields—a parallel one around each of the rails, and a perpendicular one around the projectile. Squeezed forward by the magnetic fields, the projectile accelerates rapidly along the rails and is then launched forward, breaking the circuit. The end result is a large metal slug that can go very far, very fast.

This makes a railgun distinct from explosively propelled artillery, in which the force of rapidly expanding gasses propel a shell out the barrel of a cannon. Explosive propulsion, from the massive ship-mounted cannons of World War II battleships to modern artillery, is a tried and true way to hit an object, building, and sometimes even vehicle at great distance. Missiles, which mostly use solid-fuel rocket propulsion to hurtle an explosive payload through the air, require a useful yet expendable body built for one-way flight. With missiles generally, and ballistic interceptors specifically, only a small part of the propelled mass is the useful payload. The bulk of the body is guidance, navigation, and flight control systems designed to bring the missile into contact with its target.

Railguns shift the work of acceleration from the launched projectile to the machine doing the launching. This allows the actual ammunition fired to be simple, deadly, and fast. When the US Navy started its railgun project, it stated the goal was for the weapon to fire at Mach 7, or seven times the speed of sound, and to reach distances as far as 100 miles away. This power comes at a cost, not in the projectile, but in the infrastructure of the weapon: Ships would need to be built to accommodate not just the new gun, but the expected 25 megawatts or more of electricity needed to power the gun alone.

Last summer, the Navy paused its development of a railgun, after years of declining budgets for the project. This is, in part, because the specific program itself was seen by the Navy as a poor performer. The Navy has instead invested in an alternative projectile for existing shipboard guns: the Hyper Velocity Projectile, which it believes can deliver similar performance without requiring new hardware on the fleet. Thanks to its exceptionally aerodynamic design, the Hyper Velocity Projectile is promised as a fast, efficient, far-ranging alternative to existing shells fired by ship-board guns.

Japan’s railgun plans date back to at least 2015, when budget and planning documents showed an indigenous setup with a ship mounting the railgun. In 2016, Japan demonstrated a proof-of-concept railgun that launched a projectile at a speed of 4,470 mph. At the time, this research was seen as a counterpart to US efforts, promising a future in which the navies of both nations used railguns to intercept and attack threats at a distance.

While the United States turned away from railguns as an offensive weapon, Japan’s continued development may signal a more immediately successful deployment as a defensive tool. Nikkei reports that $56 million has been included in the 2022 defense budget for Japan to develop working railguns by the end of the decade.

On land, railguns can plug into existing power grids, or have dedicated generators without the space and power constraints of operating from a ship. That would let railguns slot into existing missile defenses, between already deployed interceptors and new, longer-range missile interceptors. Railguns specifically offer a counter to newer hypersonic projectiles, which travel on trajectories that are hard for existing interceptors to anticipate and match. By traveling faster than the missiles it’s designed to intercept, a railgun slug could punch a hole through a missile, disabling or destroying it mid-flight.

The United States, China, and North Korea all tested hypersonic weapons last year. These weapons, which operated in ways quite distinct from one another, are nevertheless all designed to bypass existing defensive measures. Railguns, already in development, could offer a defense that plugs a perceived gap in missile defense effectiveness. If so, those defensive benefits would hardly be limited to just Japan. China, too, has developed railguns, and in 2018 deployed one on a warship.