China Goes Big With One of World’s Largest Support Ships 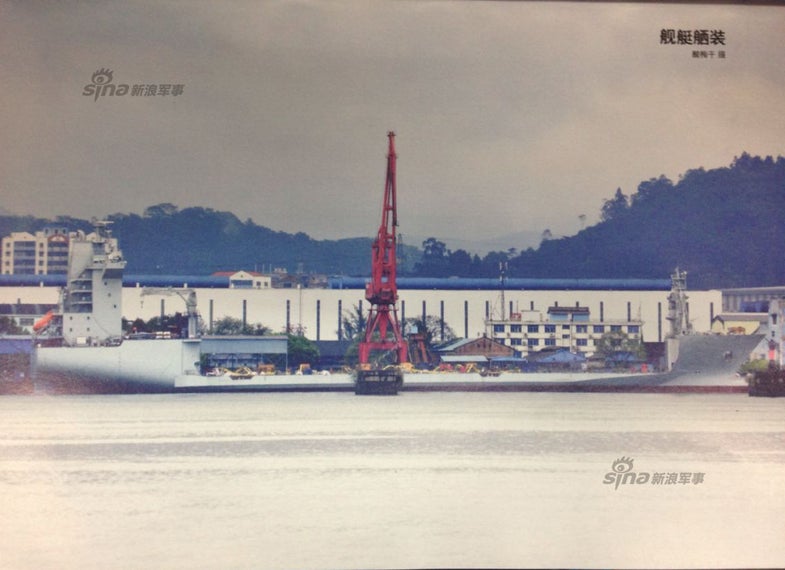 "H1138", like the Guang Kua Kou, is a semi-submersible heavy lift ship, though the Guang Hua Kou is much larger than the H1138. sina.com, via Blitzo at China Defense Forum
SHARE

The Guang Hua Kou was launched at the Guangdong Shipyard International (also builder to many other Chinese naval supply and logistic ships) on April 28, 2016. Built for COSCO Shipping Co., Ltd. (or COSCOL), a state-owned shipping line, the 98,000 ton Guang Hua Kou will be the second largest heavy lift semi-submersible ship in the world.

The Guang Hua Kou’s deck area measures 211.2 meters by 68 meters. It can also submerge its deck to 16 meters underwater. This enormous logistic capability will allow China to transport maritime infrastructure to anywhere in the world, and deploy items like floating docks and offshore platforms by flooding its ballast tanks to lower its deck area underwater. It could be used for humanitarian response, deep sea drilling and mining, or building floating offshore military bases for global expeditionary campaigns.

With a capacity to lift well beyond that of normal cargo ships, semi-submersibles also have uses beyond the energy industry, including for navies. They have been used, for example, to move smaller, shorter-ranged US Navy warships and patrol craft in deployments across oceans, as well as carry large damaged ships back to port. The USS Cole, for example, was lifted back to the United States by the MV Blue Marlin heavy lift semi-submersible after being damaged in a 2000 attack. Similarly, in April of 2016, it was explored for the new USS Fort Worth to be carried back to the US by such type ships, after engine damage stranded the LCS in Singapore (it eventually decided to return the Fort Worth under its own steam).

While owned by a state-owned civilian company, the Guang Hua Kou would potentially be available to the PLAN as it extends its global presence, much as the US Navy contracts heavy lift ships and civilian planes during peacetime and plans to do so in wartime. For instance, Guang Hua Kou’s large size means it could accommodate outsized cargo such as any guided missile destroyer like the Type 055 or 052D that have lost power far from home port, much like the MV Blue Marlin’s use above for the US equivalents. The same assets could be used in operations ranging from humanitarian disaster relief to amphibious operations, particularly in areas where ports are insufficient. Similar to the smaller Chinese “H1183” and USN Expeditionary Transfer Dock heavy lift ships, the massive deck space of large semi-submersible ships are also able to carry large hovercraft, landing craft, or helicopters.

China’s rising technological and financial might has resulted in the development of large and world class assets that extend its reach globally. Whether in the maritime domain as seen in the Guang Hua Kou and South China Sea artificial islands, space launch in the Long March 5 heavy rocket, or the largest nuclear reactor construction program in human history, Beijing has launched a series of massive projects that will enhance both its civilian as well as military prowess.

NOTE: This is an amended and corrected version of an earlier post