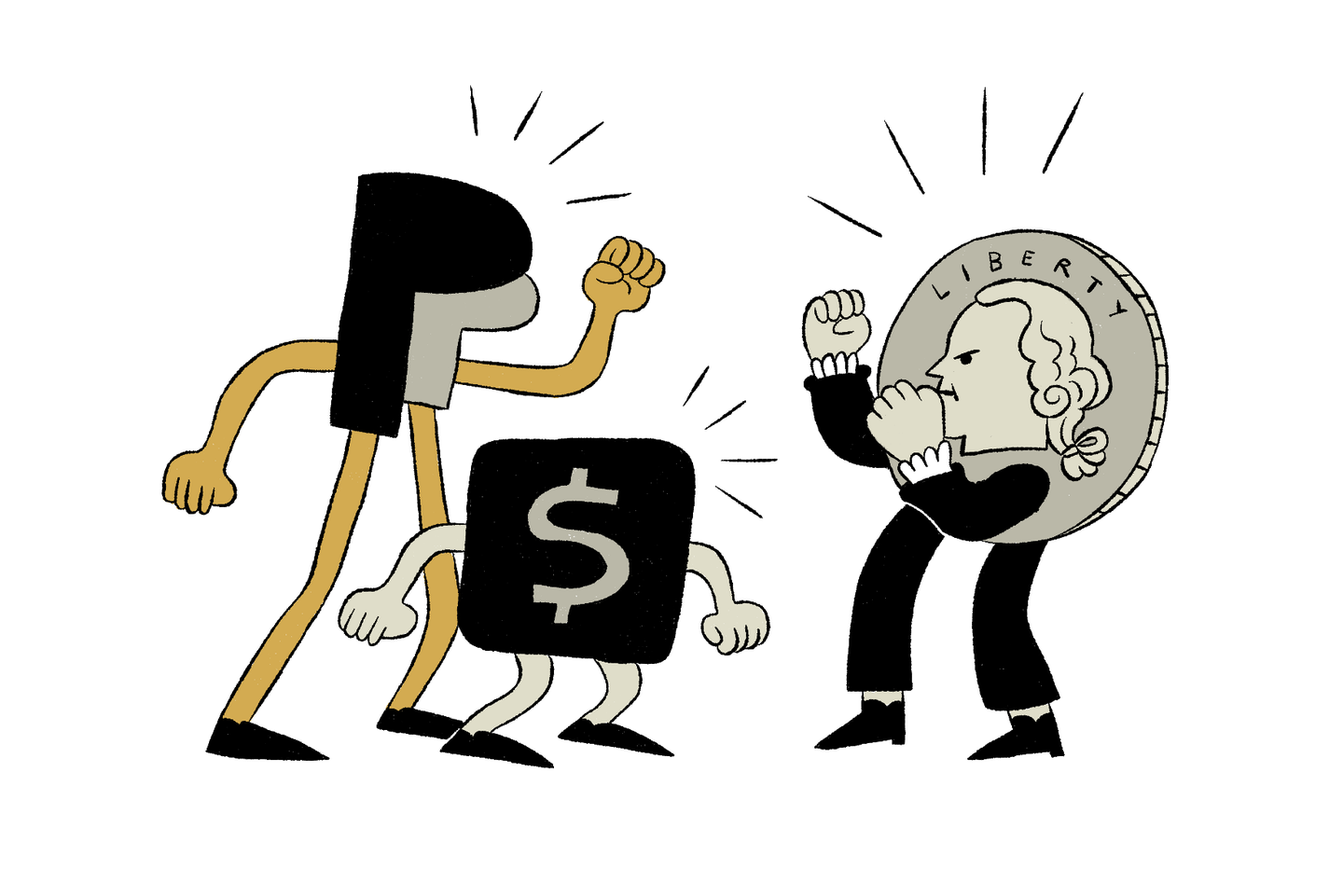 Will digital dollars ever replace hard currency in the US?

The US Mint isn't shutting down anytime soon.

ON ANY GIVEN WEEKDAY, the United States Mint can churn out almost 126.4 million pennies, nickels, dimes, quarters, 50-cent pieces, and gold dollars from its presses in Denver and Philadelphia. Giant “cookie cutters” punch blanks out of 1,500-foot-long sheets of copper, nickel, and other metals. The discs are then heated, washed with citric acid and anti-tarnishing agents, and struck with presidential silhouettes.

Despite seismic shifts in the very nature of money, the 230-year-old operation will keep on pumping fresh coins into circulation this way. Digital currency is trending, and countries around the world have unveiled bold plans for centralized electronic banks. But the alternatives won’t make physical cash go extinct, at least in the US. The total volume of hard currency in national circulation, including pennies and nickels (which cost more to produce than they’re worth) swelled by more than 5 percent each year over the past decade. Meanwhile, Americans paid with bills and coins in more than a quarter of transactions in 2019. (That number dropped to 19 percent in 2020 due to concerns over COVID spread.)

“People think cash is on the decline, but I expect we will use it for years to come,” says William Luther, an assistant professor of economics at Florida Atlantic University and director of the Sound Money Project, a financial stability and privacy research group. “The US government would have to prohibit banks and retailers from accepting it—or stop producing it altogether—to force everyone to switch to another method.” But that doesn’t mean the country is ignoring technologies that could digitize some of its coffers.

In January of this year, the Federal Reserve released a loose proposal for a central bank digital currency (CBDC) that would allow people to instantly send funds to any party through their existing financial accounts, without transaction fees. The plan’s outline, though vague, cites Project Hamilton, a pilot model created by the Federal Reserve of Boston and MIT that combines the accessibility of mobile payment apps with the verification powers of blockchain-like networks. In this system, an encrypted computer code authorizes each monetary exchange, allowing simulated dollars and cents to be drawn from a person’s virtual wallet and re-created in the recipient’s. A database then validates and records the activity to create a permanent, transparent ledger that the sender, the recipient, and any authorizers can look back on. The Federal Reserve would stabilize the value of this money, avoiding the type of volatility that’s common with credit and cryptocurrencies.

Several countries, including China, India, and Jamaica, are already experimenting with CBDCs. But the lack of anonymity with government-run ledgers could keep the idea from really taking off in the US, Luther says. “With cash you have a lot of privacy, so long as no one sees it trading hands,” he explains. “Digital currencies always link back to your [online] identity.”

Still, with President Joe Biden’s recent executive order for more research on a secure CBDC, Luther thinks the technology will probably be a nationwide option soon. “Depending on how quickly Congress and the president want to roll it out, an American digital dollar could be launched in the next two years,” he says.

But the mint won’t feel the ripples of a cashless future for many more decades, if ever. “The cost of producing material money is pretty small,” Luther says. The US government also rakes in billions of dollars each year selling gold bullion and other rare novelties to collectors. “It would be hard to justify a complete move into digital currency unless it improved payment technology in a major way,” Luther notes.

If the mint has any predictions about what CBDCs mean for coins, it isn’t sharing them. “We do not speculate on the future of money,” a representative from the US Treasury Department said in a statement. The Federal Reserve also writes on its website that while it’s considering a CBDC “as a means to expand safe payment options,” such a system will not replace cash. Even if this technology prompts Americans to empty their pockets of change, there will be no stopping the presses that make new Washingtons, Madisons, Jeffersons, and Lincolns.