To move cargo with less mess, these ships unload themselves

Self-unloading ships quickly discharge goods such as salt by using some elegant engineering. Here’s how they do it. 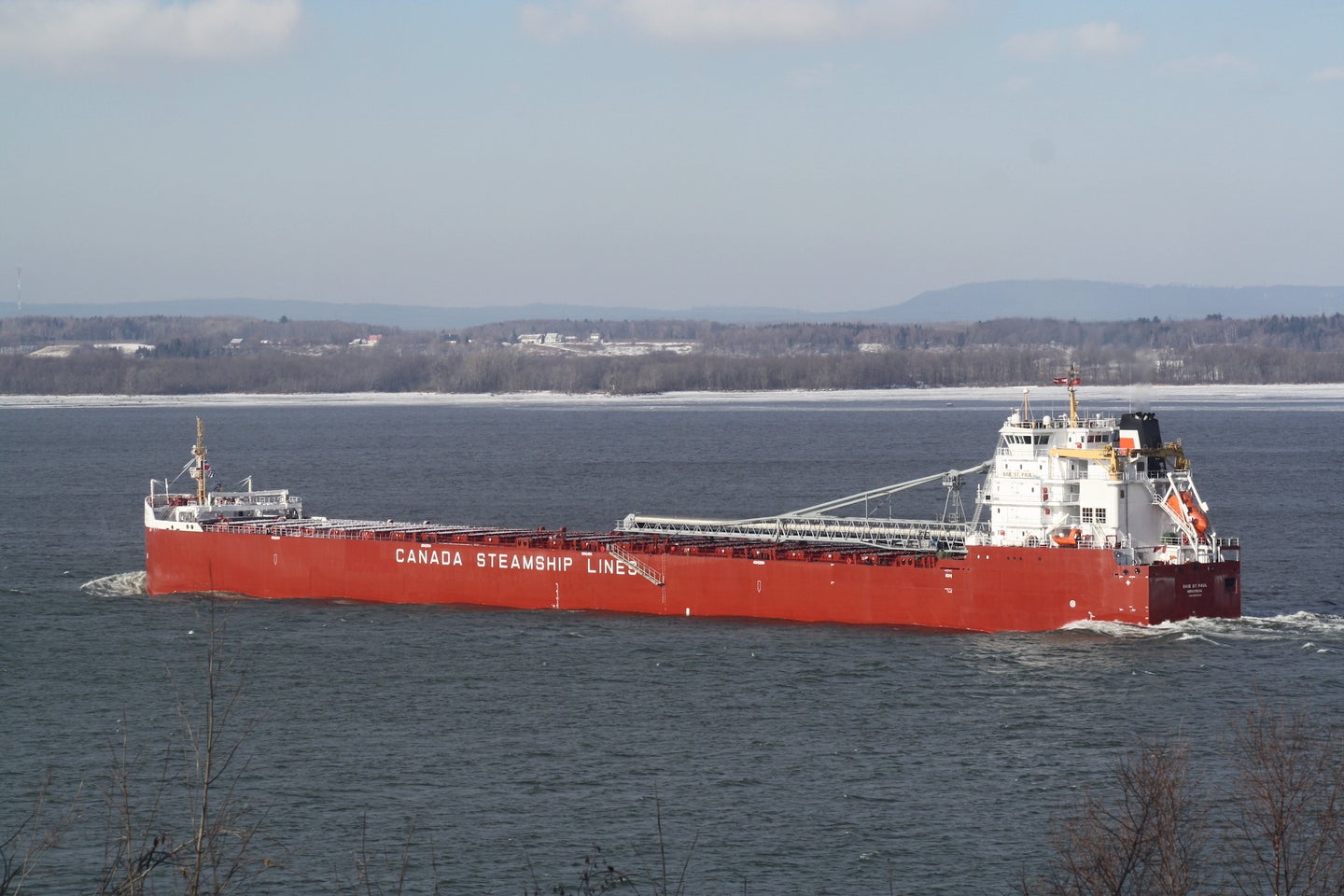 This is the Baie St. Paul, a self-unloading ship that currently carries the salt. CSL
SHARE

In the winter, roads require salt to melt ice so that drivers don’t lose control of their cars. And in eastern Canada, salt for the byways of places like Quebec City and Montreal comes from a mine on the Magdalen Islands in the Gulf of St. Lawrence.

But salt from the Mines Seleine can’t just magically transport itself across the brackish water to the mainland: It needs to ride in a ship. And the newest craft that will do that job will be a state-of-the-art vessel that’s known as a self-unloader.

Shipbuilders laid its keel in China at the end of January, and it could begin the unglamorous but important job of schlepping salt by next year. Currently it goes by the majestic designation of “CX9203,” although expect a more descriptive name to eventually be publicly revealed for the approximately 740-foot-long vessel when it is launched.

Here’s what to know about what a “self-unloading” ship is, how it works, and what’s notable about this latest and greatest one, which will have a deadweight of 28,660 tons.

What is a self-unloading ship?

When you picture the concept of a ship that can unload itself, it’s fun to imagine a Transformer-like machine that clicks and clacks and shifts all around until it has become a giant robot that carefully places its contents on the shore. In reality, self-unloaders employ a complex system of conveyor belts to drop their cargo onto dry land. It’s less cinematic, but much more practical.

“In general, what they’re known for, is an ability to discharge the content of the cargo hold using its own equipment,” says Nathalie Sykora, the vice president of global operations at the CSL Group, which will own and operate the ship.

“Our cousin would be a bulker,” Sykora adds. Bulkers are ships that transport bulk goods, like iron ore, grain, or rock salt for roads. Bulkers get their cargo onto land through cranes that are either on the shore, or on the vessel itself.

For example, shoreside cranes would grab the material from a bulker and then dump it on land, a process that Sykora argues can be noisy and also result in “spillage on deck as it crosses over the shipside.”

But a self-unloader deposits its goods on the shore via a single long conveyor belt that extends out from the ship on a covered boom that can reach up to 262 feet from the vessel. “The boom can be luffed and can be slewed and allows for the bulk cargo to be discharged anywhere the customer wants it,” she says. Because it’s enclosed, she adds, there are no “dusting issues.”

Just as you don’t want to spill your table salt all over the place when you’re sprinkling it in your soup, operators of bulk goods would like to keep things tidy, too.

But the big benefit is speed. A bulker unloads its material at a rate of about 1,100 tons per hour, while a self-unloader can do around 6,600 tons in the same time period, Sykora says.

Sykora estimates there are only about 150 self-unloading ships globally, and her company, CSL, operates about 50 of those.

How does a self-unloading ship work?

Before a self-unloading ship can spew its contents onto shore, the goods have to get on board the vessel first. This new ship will also sport a new and improved way of making that happen.

Already existing self-unloaders have multiple holds to carry material like salt, which comes in on a conveyor belt from the land. To get it in each hold, though, the vessel has to actually move. “Traditionally, what we’d need to do is shift the vessel alongside the dock,” she says.

But moving a ship can be dangerous. “Mooring operations tend to be one of the riskier operations that one can conduct on the ship,” she says. That hazard comes from the mooring lines, or wires, that hold the ship to the shore, and the deadly possibility of one breaking. “The snapback can literally kill,” she says.

The new vessel elegantly solves that problem. “The ship loader feeds one hopper mounted on the deck,” Sykora says. Then, below deck and out of sight, conveyor belts send the material to the different cargo holds. Presto, the ship doesn’t need to be moved as it’s being loaded.

A clever conveyor belt system—with some help from gravity—also handles the unloading process. The cargo holds in the ship don’t have flat bottoms; they slope inwards, like funnels. And the bottoms of those funnel-like portions have gates that ship operators can open and close, meaning that all it takes to get the bulk material out of the holds is to open the gates and let gravity do its job. Then, beneath those gates, two conveyor belts run along the long axis of the ship. Getting the cargo moving out of the holds and along the conveyor belts is just a matter of opening the gates and controlling the rate of the belts. “If I increase the speed of the belt, I pull the cargo with it,” she says. “If I completely stop the conveyor belt, the whole discharge stops, and the cargo kind of just sits there.”

In the case of the new vessel, the two long conveyor belts that run along the ship’s bottom will be some 590 feet long and 7 feet wide, and 84 gates above them will allow the cargo to spill down onto them.

Finally, to get the salt actually up and out of the ship, the conveyor belts send their cargo to the stern, where eventually the bulk goods end up in a contraption called a “C loop.” That C loop consists of two conveyor belts that sandwich cargo between them and carry it upwards. “This is the coolest part about self-unloaders,” she says. Thanks to the coolness of the C loop, the cargo is now up above the deck, and it can finally get whisked off the ship on the boom.

Sykora notes that they’ve been using self-unloaders for decades now, but she remains impressed with them. “It still continues to amaze me how we can get in and out of ports efficiently and safely,” she says.

If all this is hard to picture, fortunately the company produced a video, below, to help you visualize the elegant engineering and efficiency of self-unloaders.