The French airborne ICU was originally designed to transport injured soldiers back home. 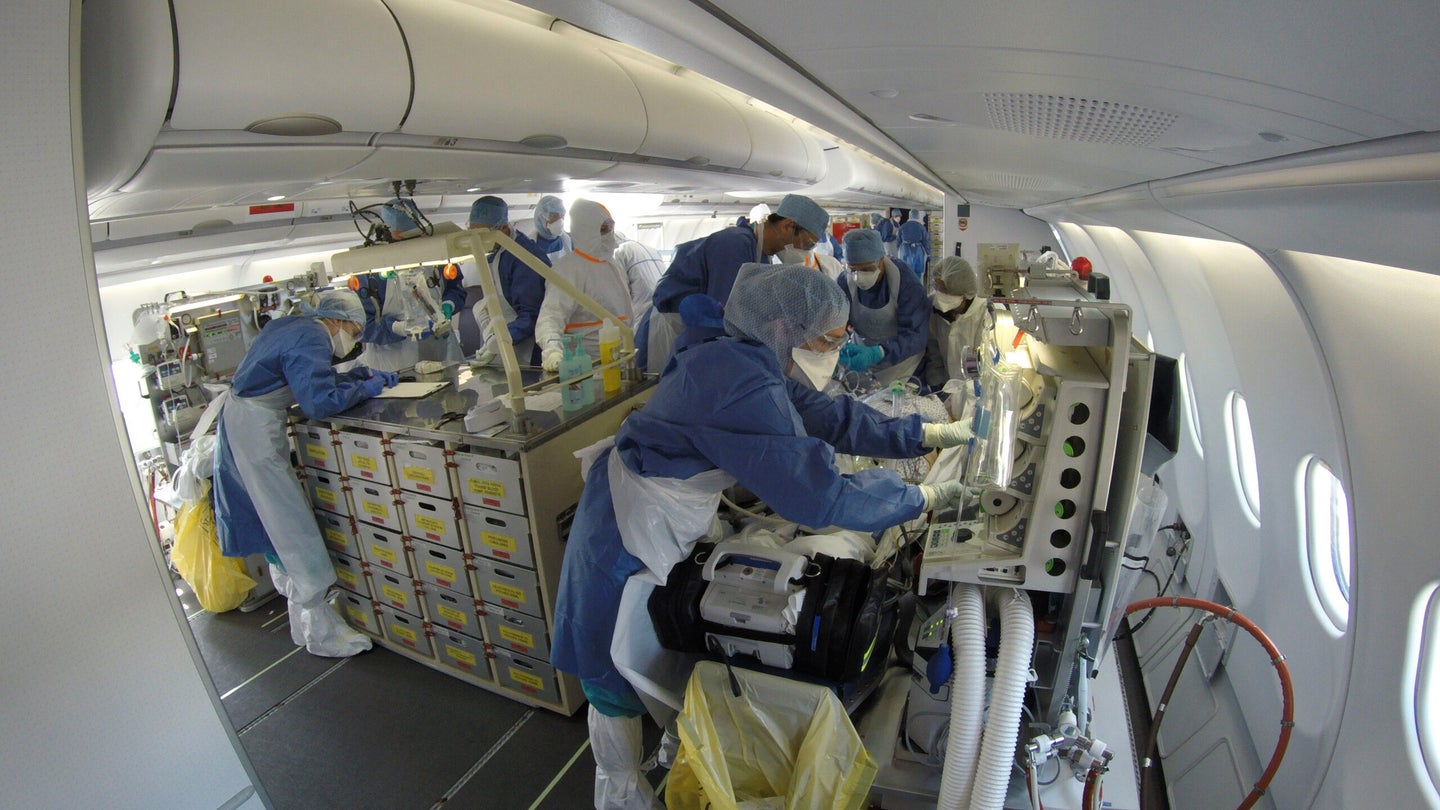 On the March 27 flight on the Morphée. French Armed Forces Ministry/Chief of Staff
SHARE

France recently used its military airborne hospital for the first time to take civilian patients, critically ill with COVID-19, from overstretched hospitals to other facilities better able to cope. The system was designed to bring seriously injured soldiers back to France from war zones, but so far, it has transported 24 people sick with the novel coronavirus.

The flying medical facility is known by its French acronym, Morphée. That stands for “intensive care module for patients who need long-haul evacuation.” (The French is “module de réanimation pour patient à haute élongation d’évacuation.”) It allows a patient to receive the same level of intensive care aboard an aircraft as they would in hospital.

Operational since September 2006, Morphée has been used five times for military evacuations; each instance saw them transporting soldiers from Afghanistan or Kosovo.

But on March 18, France used it for the first time domestically, and for civilian purposes, to transport six coronavirus victims from an overcrowded civilian hospital in France’s eastern city of Mulhouse to army hospitals in Marseille and Toulon. On March 22, it took a further six from Mulhouse to Bordeaux. Two days later, it flew another six patients from Mulhouse to civilian hospitals in Brest and Quimper, and on March 27, six more were flown from the same city to Bordeaux.

Put simply, Morphée is like an ICU designed to be assembled inside an aircraft, and can later be removed when no longer needed.

The patient is attached to a stretcher with a four-point harness, like an aircraft pilot wears. The wheeled stretcher can be adjusted so the person can lie down, or half sit, or have their legs raised. A Propaq 100 device monitors the patient’s pulse rate, respiration, blood pressure, and temperature; it also measures the concentration of carbon dioxide in exhaled gases to let the doctors know if they are over- or under-ventilating the patient. Medications can be administered intravenously.

A turbine-powered electrical ventilator, the Carefusion LTV 1200, provides breathing assistance for patients. It also automatically compensates for the 4-percent drop in the amount of oxygen in the blood that takes place when you go from sea level to an altitude of 8,000 feet, which is what most aircraft cabins are pressurized to. If the oxygen cylinders run out, this ventilator can use air in the cabin and pressurize it. And if there is an electric failure, Morphée has a stand-by pneumatic ventilator, the Medumat Standard.

A lighting system provides 1,000 lux—that’s typical for a hospital theater and equivalent to overcast daylight—as well as various sound and light alarms and spare electric sockets for optional equipment.

In addition to this intensive care module, there are a number of cabinets. Some have drawers to hold the patient’s consumable medical items, like syringes and tubing. Two other cabinets set on either side of the central aisle also allow for equipment to be stored in many drawers. One of them contains a refrigerator to store blood for transfusions as well as medication that needs to be kept cold; it also contains a compartment to stock and power an ultrasound system, a defibrillator, and an electrocardiogram. The other cabinet contains two trolleys, one for emergencies and the other for treatments that need to be brought to the bedside.

Medication and other therapeutics can be prepared on top of another cabinet, which has integrated lighting and 40 drawers. This cabinet also has a mini-laboratory that allows medical personnel to take arterial blood gas measurements, to check how much oxygen and carbon dioxide is present; ionograms, a test that measures minerals, such as sodium and potassium; and hemoglobin levels.

In the center of the aircraft, sitting facing the tail, is an administrative space with a work table and a monitoring station that centralizes all the monitors of the patients on board.

Morphée doesn’t permanently reside in an aircraft—it’s designed to be able to set up in one, or taken apart, as needed. France actually has two Morphée systems, and the most recent plane it’s being used in is a step up from the older model.

Initially used on the French Air Force C-135s, a type of transport and refueling plane, Morphée is now set up in the new A330 Phénix aircraft. That allows up to 16 patients (4 in intensive care and 12 lightly injured) to be brought back to France from more than 7,400 miles away with no stop-overs.

The Phénix is a lot more comfortable than the C-135: it’s lighter, quieter, and roomier. It has windows, and the cabin is about 17 feet wide compared to the C-135’s 12 feet.

Aircraft certified for what NATO calls “strategic aeromedical evacuation” must be able to supply adequate electricity for the medical equipment; must be easily accessibility to people who are lying down; must have a range long enough to fly to almost any place the nation is likely to operate without needing to stop over; be big enough to transport a number of injured people, and finally be available in sufficient numbers that the service is available all the time.

Very few countries have this capacity. Apart from France, the US Air Force and Britain’s Royal Air Force use Boeing C-17 Globemasters with built-in attachments for central oxygen and electric systems for their aeromedical evacuations. Germany uses a medicalized A310, a 30-year-old aircraft smaller than the Phénix, which was recently converted to be able to carry patients in critical condition.

The 14 C135s of the French Air Force—being replaced by 15 A330 Phénix—are equipped with specific electric wiring to deliver power of around 1,000 watts to ensure medical equipment such as the ventilators can function. They are also equipped with oxygen circuits that allow the 48,000 liters of oxygen gas on board to be released outside the aircraft if necessary.

The intensive care stretchers, the equipment storage modules, the modules to prepare the medication, and those to monitor the patients, were provided by Austrian company Air Ambulance Technology to French Armed Forces’ specifications.

Meanwhile, in the United States, the US Navy is sending hospital ships to New York and Los Angeles.