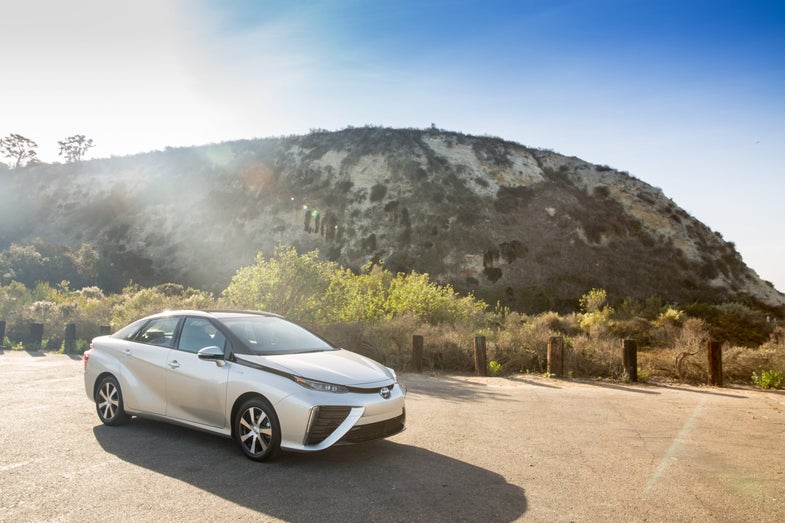 The most remarkable thing about the first hydrogen fuel cell vehicle that you can buy outright is how unremarkable it is to drive.

But don’t get me wrong: That’s not a bad thing.

As a fuel cell vehicle, or FCV, the Mirai eschews century-old gasoline engine technology in favor of a stack of wafer-thin cells that creates a chemical reaction when hydrogen passes through them. The result is electricity, which powers a compact motor to drive the front wheels.

Unlike the emissions a typical car spews from its tailpipe, the only byproduct fuel cells create is water, which drips out of a small port under the vehicle.

Yet there’s no wonderment when starting up and driving the Mirai. It feels like any other electric car, with a smooth surge of power when depressing the accelerator from a standstill.

Also like most electric cars, the Mirai feels zippy around town, but once you get above 45 miles per hour or so, you start to feel like the car is tiring out. There’s just enough power to keep pace with traffic, but not much more.

Mashing the throttle to the floor at highway speeds results in slow but steady acceleration. We’ve come to expect this from electric vehicles, regardless of how they generate their energy.

A “Power Mode” button on the Mirai’s center console boosts throttle response noticeably. An “Eco Mode” button does just the opposite, curtailing the throttle to save energy. But if you slam the accelerator to the floor in any of the three modes — normal, power or eco — the Mirai will deliver all the acceleration it can muster.

The interior stays remarkably quiet, except for a distinct, high-pitched whirring sound during moderate to hard acceleration. The sound – which is not unpleasant – is louder than that of the plug-in electric Nissan Leaf, but far quieter than a gasoline engine.

The Mirai feels spacious enough inside, though it looks a little drab, with black plastic in different finishes, shiny to dull, on nearly every surface.

The speedometer and other instruments are located high in the center of the dashboard, like on the Toyota Prius. Controls on the center console for the navigation, stereo and air conditioner were all easy to use, including the touch-sensitive sliders for setting the cabin temperature (sometimes these types of controls can be finicky, but that was not the case).

The seats in the Mirai are comfortable, both front and rear. But it’s unfortunate that U.S. models will get only vinyl, instead of the more attractive cloth fabric offered in other markets. Toyota execs say Americans think cloth upholstery is “cheap” compared to leather, but putting real leather on a hydrogen fuel cell vehicle would go against its environmentally friendly positioning, so they compromised and went with faux leather.

Seating capacity is limited to four. A center rear seat would have allowed one more occupant, but Toyota chose to put an armrest there instead. The idea was to create a luxurious experience for rear-seat occupants, execs said.

The main letdown in driving the Mirai FCV is minor and won’t be an issue for those considering whether to get one. That is, it lacks the sporty feel of the Mirai prototype, which I tested at Toyota’s proving grounds outside Tokyo late last year. The prototype felt almost like a sports car when driven briskly around the banked test track. The low center of gravity due to the battery pack under the floor really made it hug the road.

Also, the steering was sharper and the suspension was tighter on the prototype than it is on the production Mirai.

Clearly, Toyota prioritized a smooth, comfortable ride instead, and the Mirai excels at delivering it. Most buyers will appreciate comfort over sportiness anyway.

The 2016 Toyota Mirai has a range of about 300 miles on a full tank of compressed hydrogen. Refueling takes less than five minutes and is free for now.

There are fewer than 15 hydrogen fueling stations in the United States and all but a couple are in California. Toyota acknowledged that the lack of fueling stations is one of the factors that limits the pool of potential buyers for vehicles like the Mirai.

To help overcome that hurdle, the automaker announced plans to partner with a company called Air Liquide to develop infrastructure across Connecticut, Massachusetts, New Jersey, New York, and Rhode Island. The goal is to add a dozen stations in those states by 2016, which is when the Mirai goes on sale in the Northeast.

The Mirai made its debut at the Los Angeles Auto Show in November and is the production version of the Toyota FCV concept shown at the 2013 Tokyo Motor Show.

Though it is expected to sell only in small numbers at first — Toyota anticipates sales of 700 worldwide next year — it is seen as a breakthrough car by hydrogen proponents, in much the same way as the Prius was for hybrid vehicles.

Other fuel cell vehicles have come to market before. For example, Hyundai started selling a hydrogen-powered version of its Tucson in select California markets just this past summer. But Hyundai leases its Tucson to pre-selected individuals.

The 2016 Toyota Mirai is the first FCV to be made available for any general consumer to buy.

Based on our test drive, those pioneering drivers are likely to be pleased.