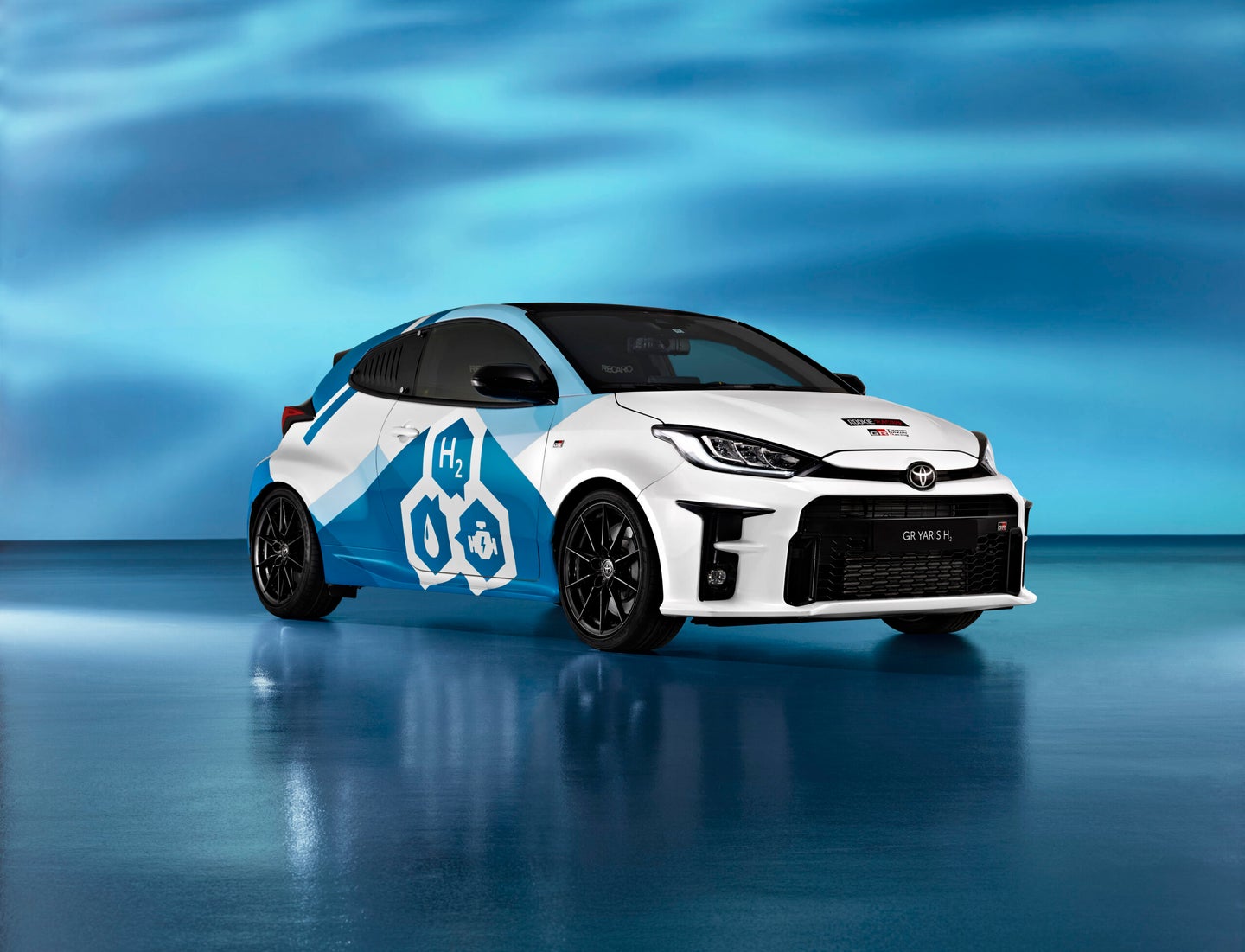 Alternatively fueled cars are rising in popularity. While hybrids and electric cars are winning that particular race, hydrogen cars have languished at the back of the pack. In 2014, Toyota cornered the market with the Mirai—an electric car which charges using a hydrogen fuel cell— but hydrogen simply hasn’t gained popularity like electric cars in recent years.

Toyota is looking to change that. The Japanese automaker has been working to improve its hydrogen technology, pushing the limits to find how this versatile fuel can be used to power the cars of tomorrow. Toyota’s newest tests explore using hydrogen in a combustion engine instead of a traditional fuel such as gasoline or diesel. Toyota, after years of tests with this rather unorthodox power source, has placed its hydrogen tech in its rowdy hot hatch, the GR Yaris.

The automaker began its experiments with a hydrogen combustion engine in 2017. But it only recently gave a public glimpse of the engine’s prospects when it used the engine as the heart of its Corolla Sport Super Taikyu race car. In May, Toyota sent the Corolla to compete in a 24-hour endurance race where it racked up more than 930 miles on hydrogen power.

[Related: Land Rover’s next Defender will run on hydrogen]

Now, for the Yaris, the automaker has tweaked the factory 1.6-liter 3-cylinder turbocharged engine, modifying its fuel and ignition systems to support the use of hydrogen. This means that the engine still cycles similarly to a gasoline engine, pumping fuel into an engine cylinder and relying on the combustion process to create power.

Although Toyota hasn’t revealed the engine’s specifications, it claims that the engine is more responsive due to the faster-burning nature of hydrogen when compared to gasoline.

Hydrogen-powered cars as a whole are still quite new, and Toyota says that this combustion technology isn’t yet ready for mainstream adoption. But consumers can already buy a battery-powered car from the automaker that is equipped with a hydrogen fuel cell, which charges the battery on the go.

In a hydrogen-powered Fuel Cell Electric Vehicle (FCEV), hydrogen doesn’t provide direct power to the wheels. Instead, the fuel cell acts like a generator by forcing hydrogen and oxygen to chemically react, producing only electricity and water—no tailpipe pollution. An onboard battery then stores the electricity and, much like a modern Battery Electric Vehicle (BEV), the energy is used to power onboard electric motors. The benefit of a FCEV over a traditional BEV is the time required to completely refuel the vehicle. Depending on the charger, a battery-powered car might take hours to completely fill a drained battery, whereas a hydrogen-powered FCEV’s tanks can be refueled in minutes at a hydrogen fueling station.

[Related: How It Works: The Toyota Mirai]

Toyota’s testbed GR Yaris has a downside compared to an FCEV, however. Combusting hydrogen is a significantly less efficient process to make power when compared with a fuel-cell-equipped car, and even less efficient when compared with burning gasoline. Toyota hasn’t released specifics on the Yaris’ power output or efficiency; however, hydrogen combustion engines have historically been challenging to package compared with gasoline motors, given the need for larger displacement to produce similar power.

A hydrogen combustion engine is also not as green as a hydrogen fuel cell. Toyota says that Yaris produces “almost zero tailpipe emissions,” which means that carbon dioxide and other gasses may still be released as part of the combustion process by burning oil used to lubricate the engine.

But there just might be a place for this tech. Toyota’s enemy isn’t electric or gasoline cars–it’s emissions. A hydrogen combustion engine’s emissions are negligible when compared to a traditional gasoline-powered car. And while the tech isn’t ready for the mainstream car buyer just yet, Toyota is working to find out if it may one day be feasible. And even if the tech does not end up as a road-going, combustible fuel, it may find its place in racing applications, alongside synthetic fuel, to keep the sound and spirit of the combustion engine alive.