Happy 75th birthday to British automaker Jaguar! As a birthday present, they’ve actually given us something new to drool over:... 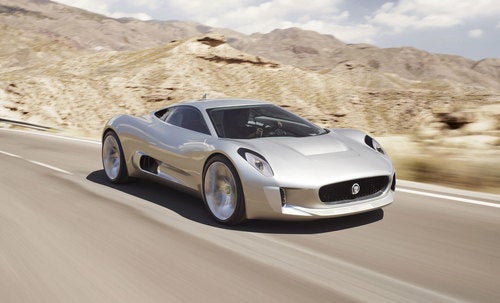 Happy 75th birthday to British automaker Jaguar! As a birthday present, they’ve actually given us something new to drool over: A 780 hp mostly-electric supercar capable of hitting 250 mph with a whopping 500-mile range, all wrapped in a body inspired by the 1966 XJ13, the car the chief designer calls “possibly the most beautiful Jaguar ever made.”

Unveiled at this year’s Paris Auto Show, the Jaguar C-X75 is a vision of the future, perhaps a decade or two from now, when high-efficiency, ridiculously high-powered electric cars are possible. The C-X75 is a hybrid, relying on four electric motors (one per wheel) rated at 195 hp each. Powered by a (one assumes absolutely massive) lithium ion battery pack, Jaguar says the two-seater car can get to 62 mph in 3.4 seconds, with a range of about 68 miles.

The battery works in pretty much the same way as other mostly-electric vehicles like Chevy’s upcoming Volt. The car is powered exclusively by battery for the first 68 miles (the Volt gets about 40 miles, for comparison) and is then boosted by two small gas turbines. These turbines provide about 94 hp each, for a range of about 500 additional miles (the Volt’s teeny gas engine nets about 300 extra miles). Those turbines work independently and can refill the electric batteries as well. 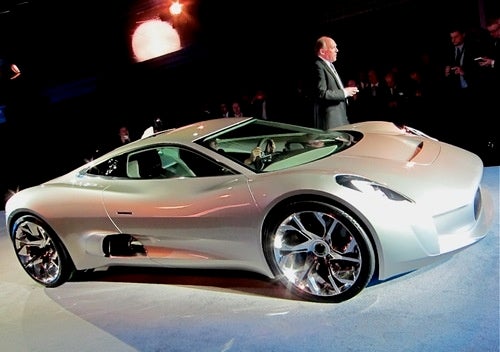 The interior is luxurious as well, featuring a new series of touchscreens and a speaker system that relies on transducers that line the walls and ceiling, supposedly to compete more effectively with the giant noisy engines right behind the seats.

Of course, the C-X75 is just a concept–I doubt the quoted stats are even possible with today’s tech, considering they outpace by a large margin the capabilities of modern hybrids and EVs–but usable, practical ideas could absolutely spring from it. Here’s hoping we get to drive something like this one of these days.