Toyota has donated 208 used Camry Hybrid batteries to Yellowstone National Park to power a cluster of five buildings in... 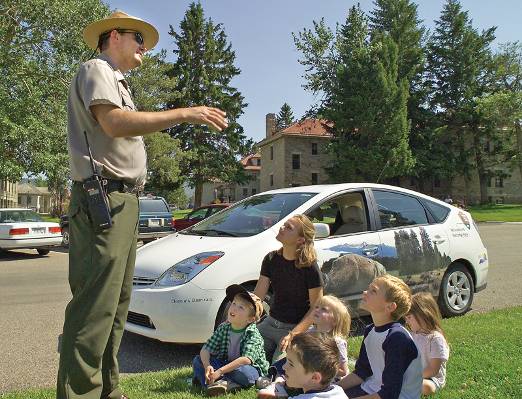 Toyota has donated 208 used Camry Hybrid batteries to Yellowstone National Park to power a cluster of five buildings in the wilderness.

Though a couple of hundred batteries is not a lot when compared to the millions in circulation, the altruistic gesture has bigger implications: It shows what can be done with large, expensive battery packs from hybrid and electric vehicles once they’ve outlived their usefulness as a power source for automobiles.

Over time, batteries lose their capacity to hold a full charge, which makes them unusable in vehicles. Most automakers warranty hybrid batteries for up to 10 years, but their true longevity is hard to nail down because it depends on many factors, such has how often they discharge and recharge their energy. Employing the used hybrid batteries in a stationary energy system like the one at Yellowstone can double their lifespan, Toyota says, at the end of which they get recycled.

Yellowstone will create a single, stationary energy system with the 208 used nickel metal hydride batteries. The system’s total storage capacity of 85 kilowatt-hours will be more than enough to power the five buildings that comprise the park’s Lamar Buffalo Ranch field campus, Toyota says. The ranch facilities are used for eduction and research.

The fact that Yellowstone will use solar and micro-hydro turbine systems (i.e. small-scale hydroelectric power) to generate the energy that will be stored in the system makes it ideal as an off-the-grid power source in the remote wilderness. The system is scheduled for installation this fall.

It’s not the first time Toyota has reused hybrid batteries for stationary power sources. The company’s dealerships in Japan have been using them for ancillary and backup power since 2013. Toyota’s Alabama manufacturing facility is also looking into used battery systems to help power operations and provide emergency backup.

Not all used Toyota hybrid batteries are suitable for reuse, though. Those that aren’t get recycled, Toyota says.