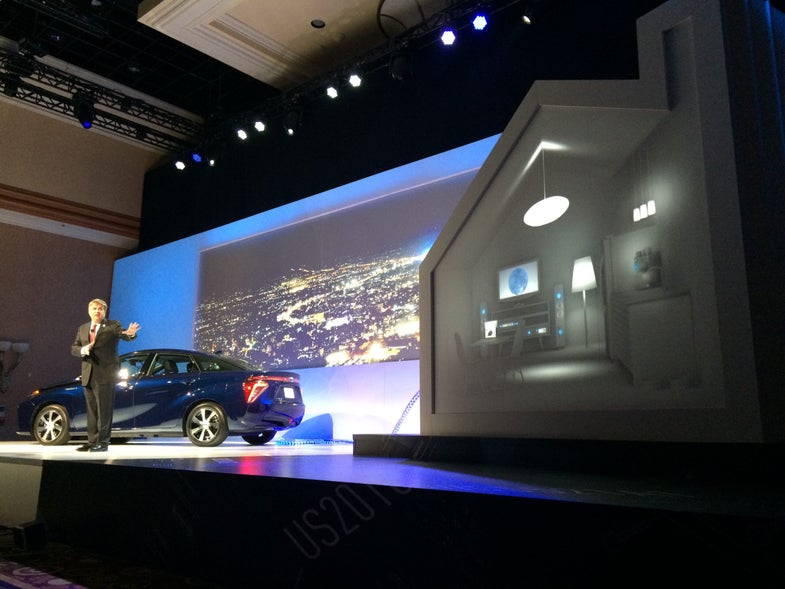 Toyota picked the right person to warm up a packed house at its press conference during the Consumer Electronics Show.

Charismatic futurist and theoretical physicist Michio Kaku worked the audience of tech journalists and bloggers in Las Vegas, eloquently espousing benefits of a so-called hydrogen society that Toyota hopes to spur with its Mirai fuel-cell vehicle, set to go on sale later this year.

Lofty words, but ones Toyota believes in so passionately that the company announced that it is releasing 5,680 patents it holds on hydrogen fuel cell and related technology for royalty-free use, in hopes of kickstarting the development of fuel-cell vehicles among other automakers.

“We believe the next five years is critical,” said Bob Carter, Toyota’s senior vice president of automotive operations, in an impromptu interview following the press conference. “So we’re offering all of our 20 years of development to our competition. We think it’s the right thing to do.”

Carter’s speech, which followed Kaku’s, was just as impassioned. It even included a bit of staged melodrama when, at one point, the lights went out.

“Wait just a moment, this happened in rehearsal. I got you covered,” he said.

Carter then pulled a large lighted power cord out from behind the Toyota Mirai that was on stage and plugged it into the car’s power port, after which the lights came back on.

It was all just for show, but the point was to illustrate that the car’s fuel cell stack can be used as an emergency power source.

The patents Toyota is releasing for royalty-free use include 1,970 related to fuel cell stacks, 290 dealing with high-pressure hydrogen tanks, 3,350 pertaining to software control, and 70 related to hydrogen production and supply.

In total, they represent 20 years of research and development. Carter would not put a dollar figure on it, though. “The best I can give you is, it’s enormous,” he said.

With Toyota’s technology, competitors will gain instant access to hard-won innovations, including painstaking hours Toyota engineers spent in the harsh northern climates of Canada, figuring out how to get its hydrogen fuel cell to operate in sub-freezing temperatures.

But not just anyone will have access to the precious patents.

“There will be an application process to ensure what the technology will be used for, and then a royalty-free license will be issued that will get us through this initial introductory phase,” Carter told us.

Toyota is making the patents available through 2020. “Beyond that, it’s simply unknown at this point,” Carter said.

Other automakers have hydrogen fuel cell cars under development, too. Hyundai started selling a hydrogen-powered version of its Tucson last summer in California on a limited basis to select customers.

Honda will be showing a new version of its FCV Concept at the North American International Auto Show in Detroit this month. A production version is anticipated to go on sale in Japan this March and later in Europe and the United States. Honda previously offered a fuel cell vehicle called the FCX Clarity on a limited basis to select owners in California.

But the Toyota Mirai is the first fuel cell vehicle that is truly commercially available. It is set to go on sale in California in the fall and in a handful of Northern states by 2016. The price is $57,500, or $499 a month for a 36-month lease. Federal and state incentives could lower the final cost for buyers to under $45,000.

Fuel cells create a chemical reaction when hydrogen passes through them, resulting in the creation of electricity and water vapor. They have no moving parts, compared to thousands in traditional gasoline engines.

The technology clearly has a lot of upsides, but it requires a refueling infrastructure to really take off. That’s why Toyota has invested $7.3 million in fueling stations for California and will be investing more to help create a hydrogen network in the Northeast.

During his speech at CES, Kaku admitted he was a skeptic of the commercial potential for hydrogen fuel cell vehicles. But after he learned that the Toyota Mirai can drive 300 miles on a tank of compressed hydrogen and requires only about five minutes to refuel, he was sold.

One huge advantage he pointed out is that the fuel itself is abundant.

“Seventy-five percent of the universe is made out of hydrogen,” Kaku said. “You want to see hydrogen? Go outside, take a look at the stars, the galaxies, the sun. Hydrogen is the most plentiful substance in the universe. And contrast that now to oil, black gold, one of the rarest of substances on the planet Earth. Nations will kill to secure supplies of oil.”