The UK is upgrading military buggies into self-driving vehicles

The purpose is to automate resupply tasks, keeping humans out of danger when possible. 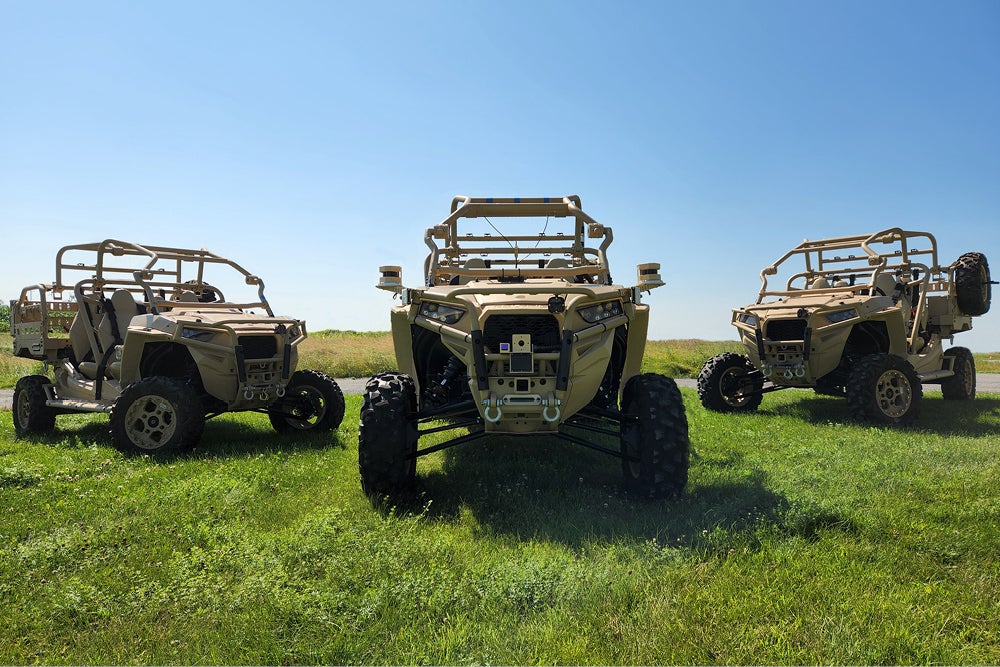 When the Royal Marines ride into battle on buggy-like MRZR transports, they may be able to send the transports back for supplies with no humans at the wheel. The MRZR is a four-wheeled unarmored light vehicle that is practically just a frame of a body around a versatile chassis. For its stated mission of fast transport over rough terrain, it’s an ideal shape. Like most vehicles, it’s driven by a human being. But to make it even more versatile, and to risk fewer lives on military missions, the United Kingdom’s Ministry of Defence wants a suite of sensors and automated driving tools that can let the vehicle operate autonomously.

On August 16, defense company Rheinmetall Canada announced that the company had installed a PATH autonomy kit on a Polaris-made MRZR D4 for the first time, as part of Protect Theseus for the UK’s Ministry of Defence. Project Theseus is “an initiative to automate supply delivery to soldiers in hostile environments,” and the PATH kit is an AI-powered navigation system that should help with that objective.

“Under Project Theseus, it is hoped the use of self-driving air or ground platforms to deliver combat supplies, including ammunition, materials, food and fuel, will reduce the need for personnel to risk their life by entering into what are typically hostile environments,” the British Army said in a release in January.

Rheinmetall’s contract was awarded in February, and the fitting of the PATH kit to the MRZR is a demonstration of its capability. The contract will outfit up to 11 MRZR D4 vehicles with the kit.

“Once equipped with the A-kit, the MRZR D4 will be ready for crewed and teleoperated use cases, as well as autonomous execution of resupply missions in complex terrain, adverse weather conditions, day and night,” writes Rheinmetall.

The light vehicle can seat four people, or six with a couple added seats, and despite a weight of just 2,100 pounds, it can transport up to 1,500 pounds of people and/or cargo. The MRZR D4 can also be outfitted with one or two litters to transport the wounded or deceased from battle and into safer environs.

“It hasn’t got armour protection, so with that it’s more for manoeuvre and agility than for weapons systems,” Chris Burge, a warrant officer with the Royal Marines, said during testing of the crewed MRZR in 2021. “The guys are loving it. It’s something new and the capability is better than what we usually have. The guys are on the ground now understanding limitations and the capability across arduous and demanding conditions.”

By adding an autonomous kit, soldiers or marines could gain the ability to send the vehicle out for resupply, or to evacuate the wounded without exposing a human driver to enemy fire. In the testing of the crewed version in 2021, the marines noted that its light body made it ideal for fast attacks at unsuspecting targets, like radar or missile installations.

Should all go well, a light vehicle can carry the commandos out of danger after the mission. Should they need more ammunition or other supplies, sending the vehicle on its own lets the troops hide or fight without having to manage the vehicle in combat.

Combat resupply is a hard mission. While soldiers go to war packing plenty of supplies, a long fight in a fixed position can exhaust those reserves. And of course, an attack that takes out a transport vehicle can destroy supplies inside of it. Getting relief most often means sending more troops, but if lines are stretched thin or there’s simply none around to spare, troops can be forced to wait or retreat.

Autonomous resupply, by ground vehicle or flying drone, can make the difference in a fight and in surviving a fight. But for it to work, the vehicle doing the resupply has to safely arrive and not imperil anyone else in the process. Autonomous navigation of motor vehicles is a hard problem in environments as straightforward as highway driving. Add in the variables of rough terrain and combat, and it can become much harder.

Steps to mitigate that risk could include combining information from multiple sensors, mapping the environment as the vehicle travels, and communication with other vehicles as well as remote human operators. Adding the ability for the buggy that carries soldiers into combat to carry them out of it should the mission go badly is a tremendous boon for forces that operate light and alone, like marines specifically or expeditionary armies generally.