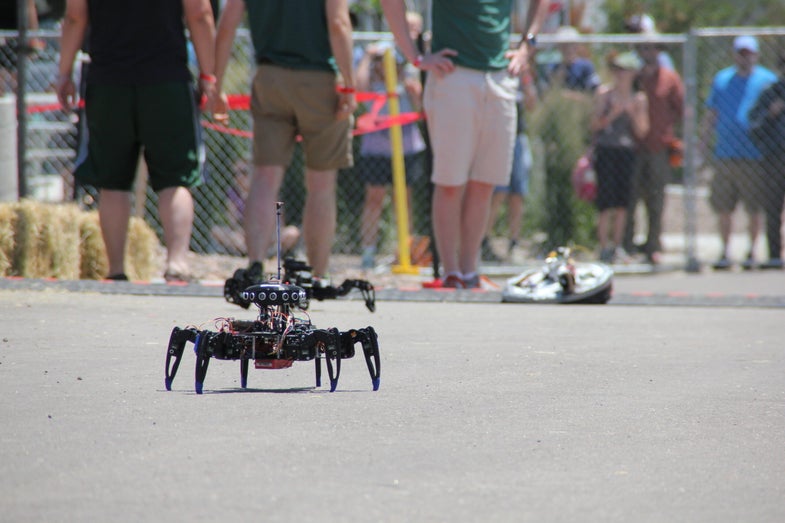 The challenge of the Autonomous Vehicle Competition, hosted by hobbyist electronics vendor SparkFun at its Boulder, Colorado, headquarters, seems simple enough: Build a robot that can navigate itself around the company’s parking lot. Though the AVC course is dotted with small obstacles, it’s really just one lap — a distance of less than 900 feet. But for the majority of competitors, it feels more like the path into Mordor.

Flashback to last weekend, in the thick of this year’s competition. The phrase: “I just hope I make it around the first corner” fills the air under the Pits Tent, where long tables are cluttered with skeletal RC cars, thickets of loose wire, boxes of circuit boards and spare parts; the detritus of a mad roboticist’s laboratory. Clustered around them are students, engineers, and hobbyists of all ages making the frantic last-minute adjustments that they hope will give their bot the speed and smarts to run the course under its own guidance.

“In seven years, it’s gotten really, really advanced,” says Nathan Seidle, who founded SparkFun in his college dorm room and created the AVC to settle a friendly debate among his employees about the best strategy for making self-guided vehicles. “The very first years, it was pretty spectacular when a robot made the first corner,” he says.

This year, half of the 71 teams entering the AVC will clear that first bend. But only a handful of bots will make it all the way around the course — dodging barrels, jumping ramps, and possibly tangling with The Discombobulator, an eight-foot plywood platform that spins at 50 RPM and guards a coveted shortcut. 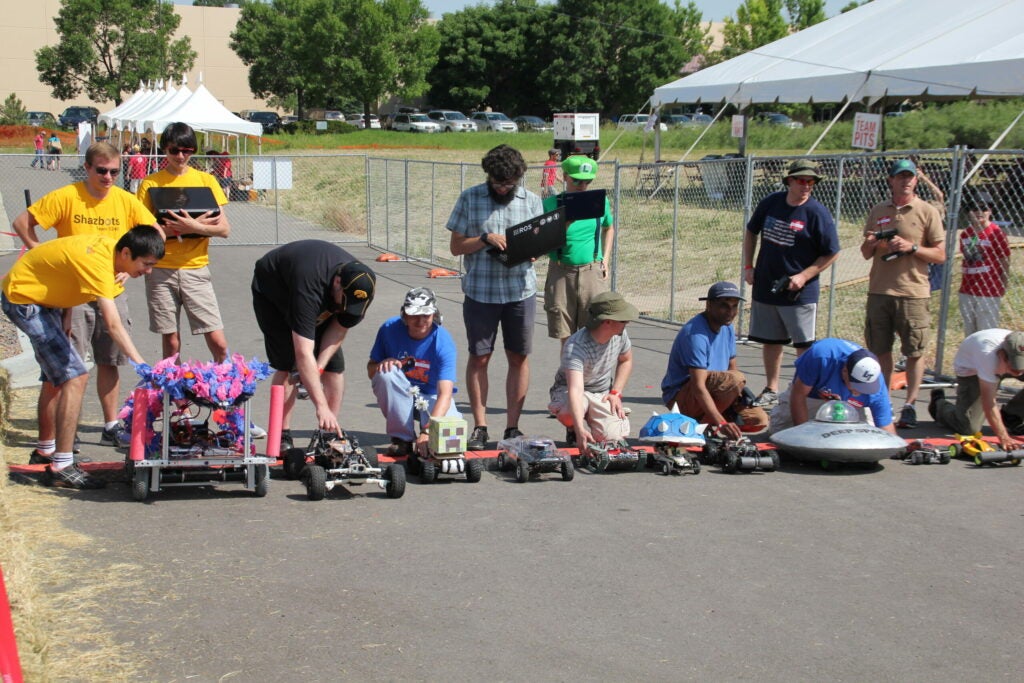 Competitors at the AVC display not just technical prowess, but creativity too. The vehicles come in all shapes, sizes and colors, from souped-up RC cars to tissue paper dragons on custom frames.

Despite advances in electronic sensors, the proliferation of low-cost computers like the Arduino and Raspberry Pi, and high-profile projects like Google’s self-driving car, building a robot that doesn’t ram itself into walls is still pretty difficult for amateurs and pros alike.

Nathan Peterman, an 18-year-old, recent high school graduate from Cleveland, saw the proof first-hand when he attended the DARPA Robotics Challenge earlier this month, which featured humanoid bots built by corporate and academic teams with vast resources and expertise. “The robots were almost as unreliable as these ones here,” he says. “They fell over every 10 seconds.”

Peterman’s own robot, a tank with foot-long metal treads, is based on a kit sold by SparkFun. It’s steered by an Arduino Uno that reads signals from a pair of ultrasonic rangefinders, which use sound waves to detect walls and obstacles. Peterman says it worked fine in his hotel room, but the haybales that line the actual course seem to absorb ultrasonic frequencies. The bot rolls right into them, never knowing they’re there. 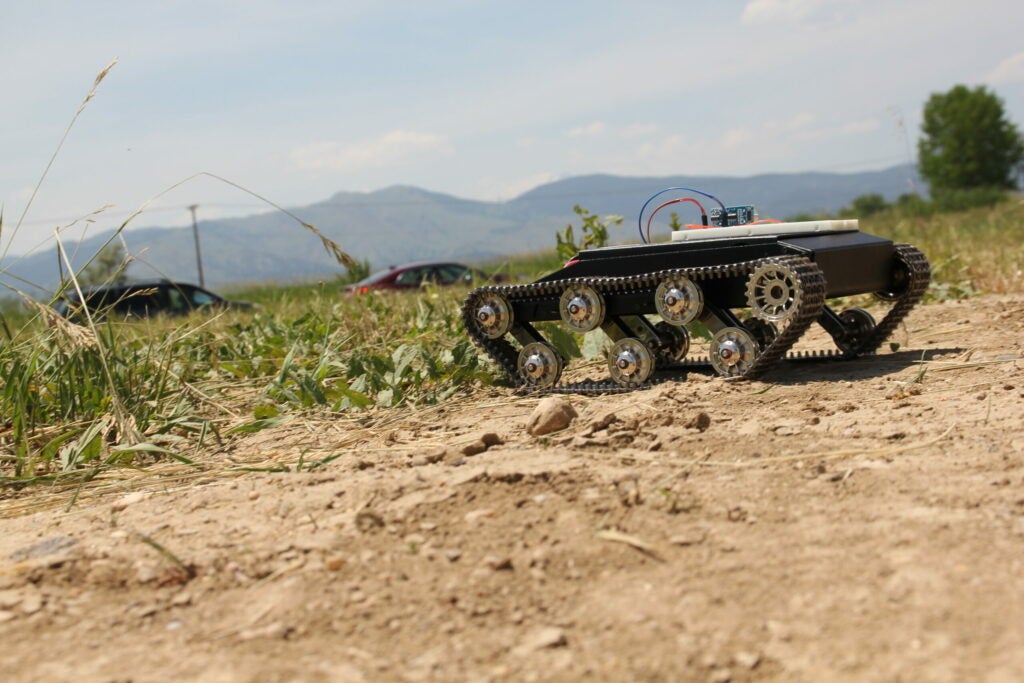 Tanks for the memories

Nathan Peterman, who just graduated from high school in Cleveland, says this rugged design was “was kind of a big mistake.” The treads made it hard to measure the bot’s progress around the course. Lesson learned, says Peterman: “Tanks are not a good idea, no matter how cool they are.”

Many other teams use similar sensors for “object avoidance,” but pair it with GPS for navigation. Peterman opted not to, in part because there are bonus points for doing so. “Although looking back, it probably would have been a good idea,” he says.

Well, maybe not. A lot of GPS-enabled bots could barely make it off the starting line before getting confused. In one heat, a pair of insect-like “hexapods” crawled immediately to the left, right into a fence, as though trying to terrorize the spectators. In fact, one of the teams told me, it was probably just a discrepancy between the preset waypoints they’d pulled from Google Maps and the bot’s real-time coordinates as reported by GPS satellites.

“As it turns out, GPS is not very accurate,” says Ted Meyers, a software engineer at Northrop Grumman who entered the competition alongside his 9-year-old son, Rory. Neither of their four-wheeled bots use GPS at all. “It may be accurate to about two or three meters for the GPS units they’re using out here, and that’s not enough,” Meyers says. Three meters is about the width of the entire course, so a robot can easily end up heading to a spot well out of bounds. 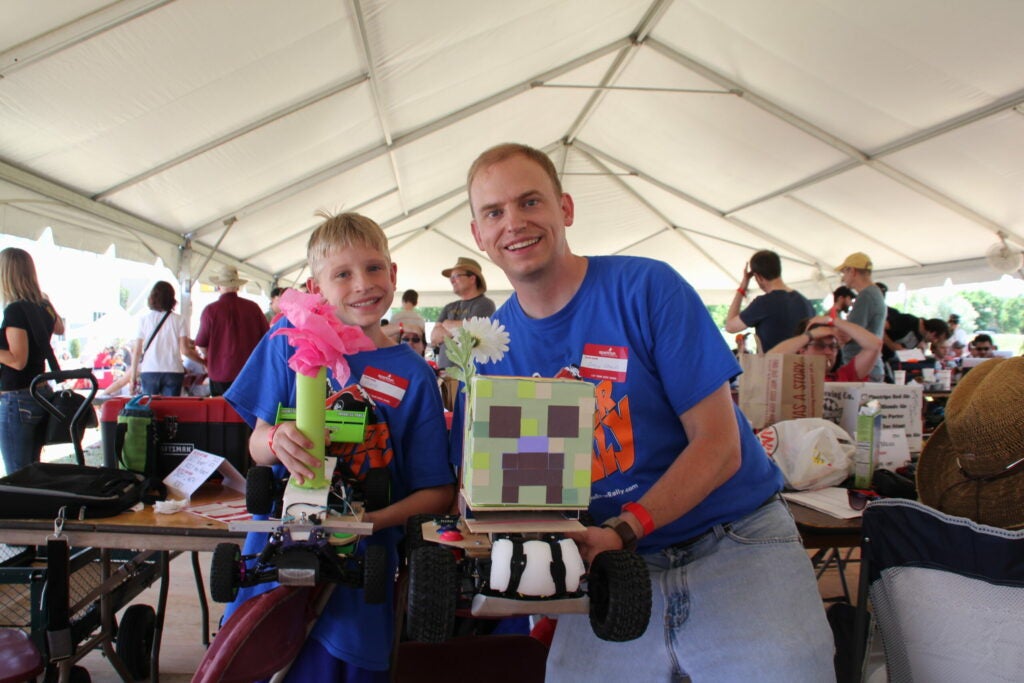 This was software engineer Ted Meyers’ fourth time entering the AVC, and the first time for his 9-year-old son, Rory. In addition to learning about math, programming and magnets, Meyers says, “We’ve learned that robotics is very frustrating.”

“We’ve found that simpler is better,” Meyers explains. “Our first design tried to use a lot of sensors like sonar and infrared range-finders. We’ve eventually got down to this point where we have two sensors, and that’s only two things that can go wrong.”

Meyers’ approach is to plot out the exact path he wants the bot to follow. All it takes is a gyroscope or compass to know which direction it’s pointed, and an odometer to measure how many times the wheels have rotated since the last turn.

This kind of “dead reckoning” turns out to be a very reliable way to solve the First Corner Problem, at least when the route is known in advance. The Meyers’ bots made it to the finish in nearly every heat to take second and third in their division, while another bot — “Roadrunner”, built by Lockheed Martin engineer Rich Burnside — used the same strategy to take first place for the third year in a row. 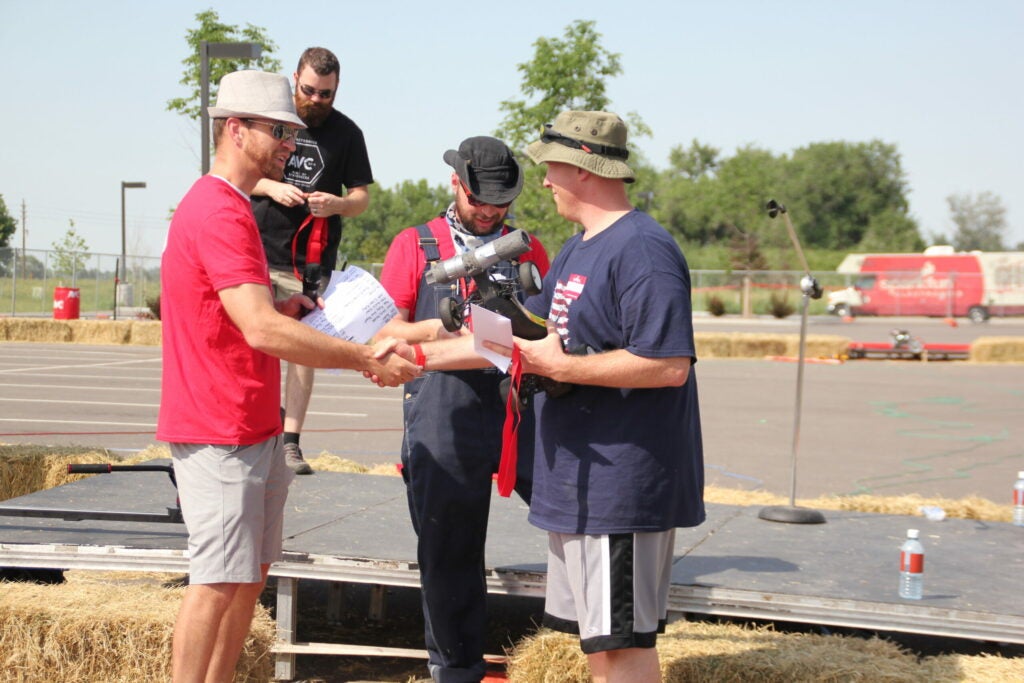 But at the AVC, it’s not just about winning. Like everything SparkFun does, the event’s mission is primarily educational. There are plenty of adult competitors, but most are college students, members of high school robotics clubs, or younger kids learning about robotics from their engineer parents.

“It’s totally awesome to see so many kids get inspired and excited about robots,” says Seidle. “And hopefully we’re encouraging them to enter into the STEAM fields — math, science, engineering, all that fun stuff.”

One of those kids is 11-year-old Marie Roell, who took home the Rookie of the Year award. She and her father, Thomas, started building her robot “Killer Kitty” about six months before the competition. Marie was responsible for designing, assembling and testing the bot, while her dad contributed the programming — under Marie’s direction. 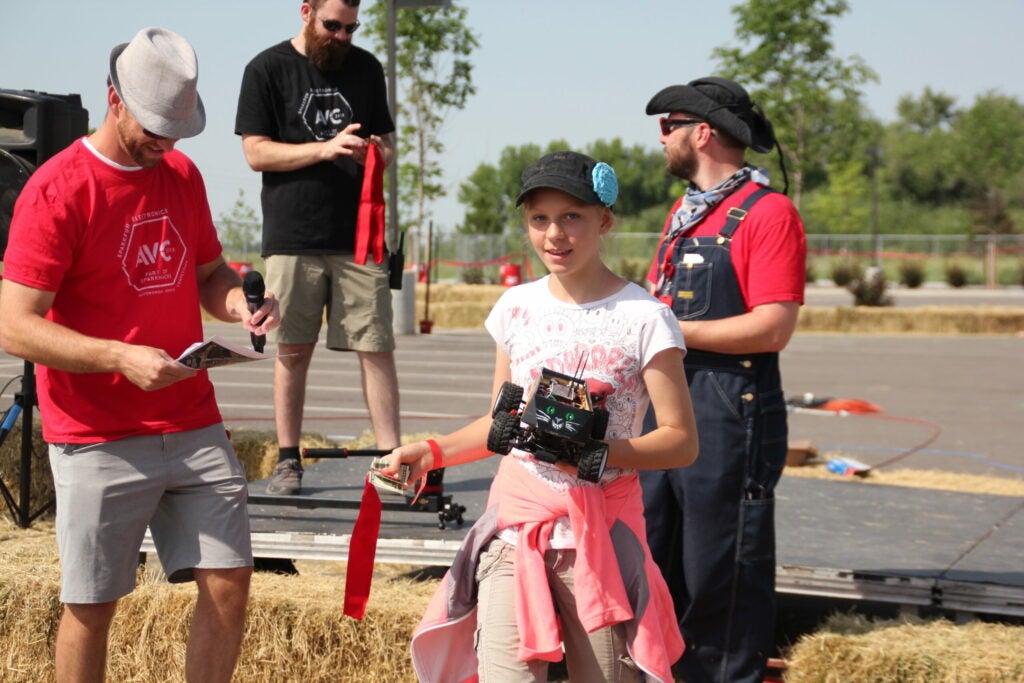 Marie Roell, 11, took home the Rookie of the Year award, which is how SparkFun’s judges recognize the first-time competitor whose progress they’re most excited to follow in coming years. When asked if she’ll be back, Roell’s answer is a firm “Yes.”

Last year Thomas collaborated with Marie’s older brother, Leon, who this time was able to do most of the work on his own robot himself. “It shows the kids engineering principles,” says Thomas. “Things will go wrong. If they go wrong, how do you fix them?”

In the fall, Marie will join Leon at the Byers campus of the Denver School of Science and Technology, which offers a robotics club and programming classes as part of the middle-school curriculum.

“I like that you can use technology to create things that come to life,” Marie says. “I just think it’s so fun.” 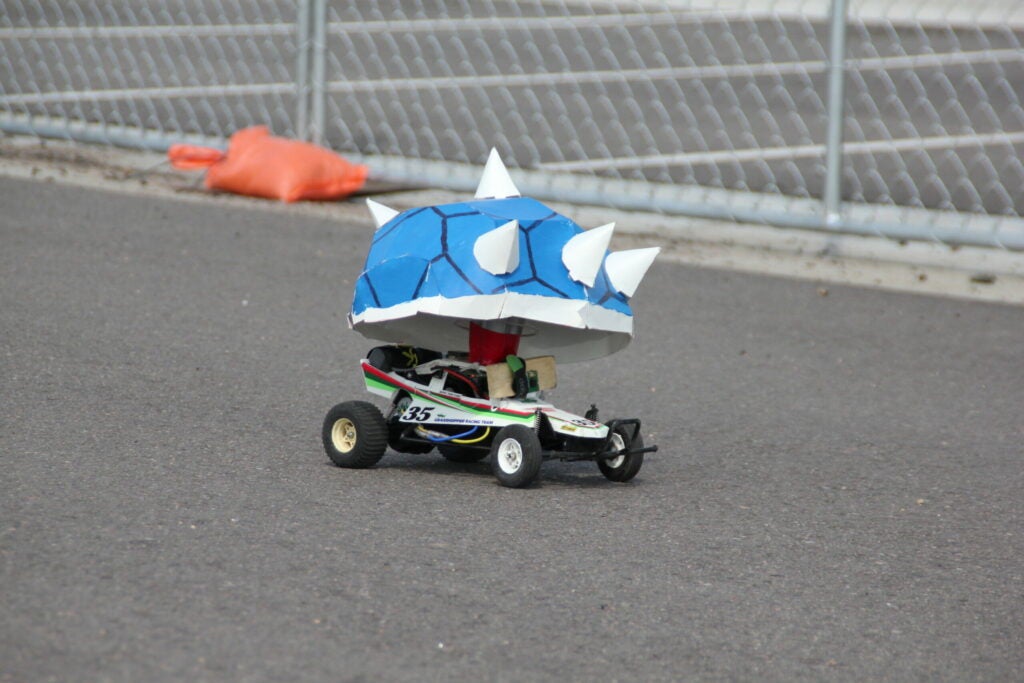