The 2022 COPO Camaro offers the biggest engine you can buy in a US passenger-sized car, but alas, it's not street-legal. 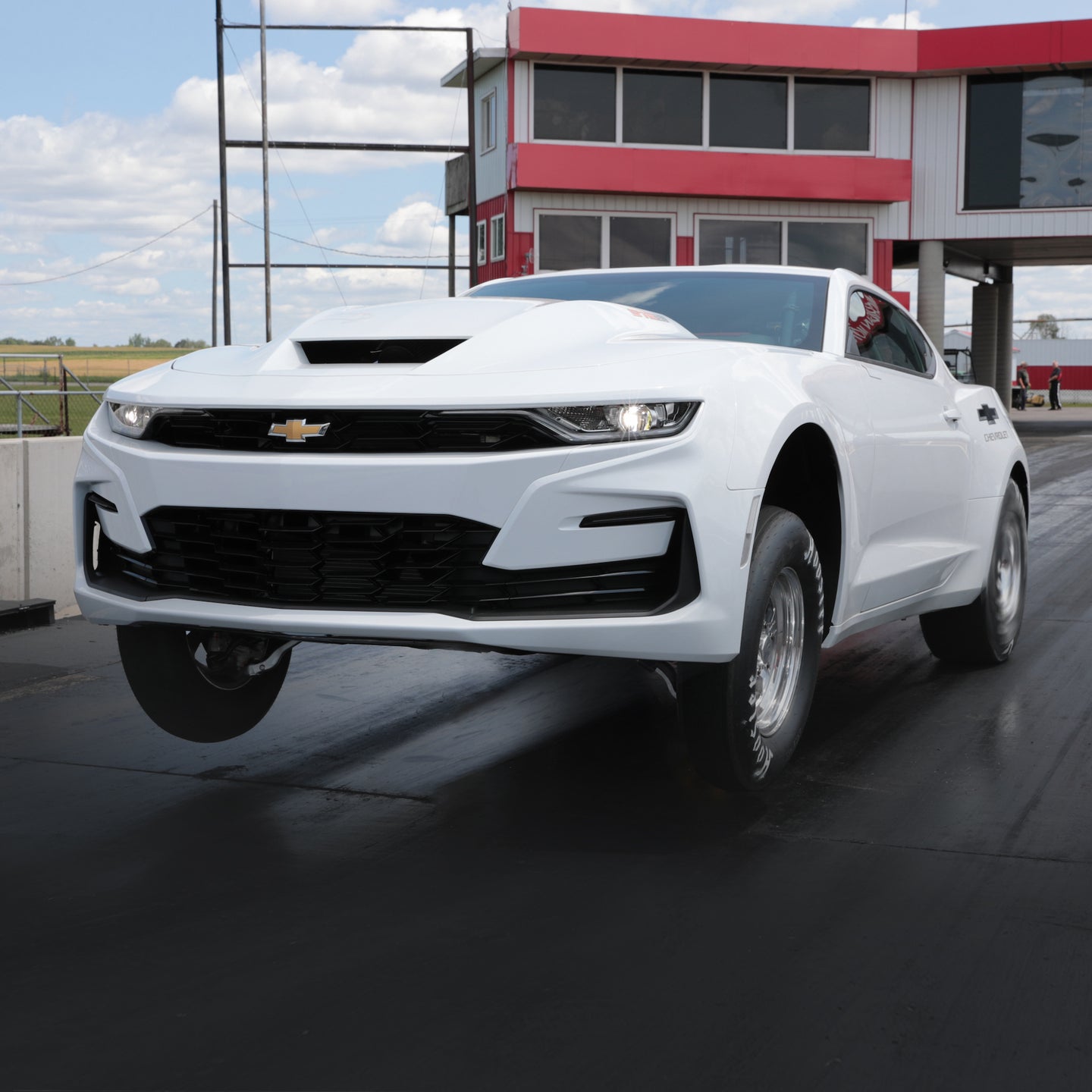 General Motors is the granddaddy of automotive power. The Detroit-based automaker is credited with building America’s very first muscle car in 1949, and has been churning out hits for more than 70 years.

The muscle cars of today might look different than their ancestors, but the idea is still the same: shove a huge V8 engine under the hood and crank up the horsepower. Now, GM is revamping its famed COPO Camaro for 2022 and offering it with the largest gas-powered V8 available in a passenger-sized car today.

When customers want to buy a new car these days, some automakers let potential buyers simply configure their desired vehicle online and wait for it to be delivered. In the 1960s, however, customers had no option but to go into a dealership and place an order in-person. The dealer would then order the car with the manufacturer through a specific ordering process—for Chevrolet, this could be performed through the Central Office Production Order (COPO) system.

The COPO process was meant for dealers to order very specific options for fleet cars. But before long, some dealerships figured out that they could use the COPO process to order crazy performance-oriented versions of street cars by inputting part-specific codes into the vehicle configuration order sheet. In 1968, one Illinois dealer found out that they could order the compact Chevy Nova with a larger big block engine only meant for Chevrolet’s full-sized cars like the Impala. This was the same process used to order the powertrains for some of the famed Yenko Camaros.

Within a few years, General Motors got wise to this process and shut it down. There would be no more COPO-built performance cars until Chevrolet officially unveiled its factory-built COPO Camaro in 2011, using that famed COPO term but definitely designing it to their own factory-tuned specifications.

The COPO Camaro known today is a race-specific vehicle, meaning that Chevy builds the car specifically to partake in NHRA drag races. As such, the manufacturer builds the car with a number of high-performance engines under the hood.

New for 2022 is a 9.4-liter naturally-aspirated V8—the largest V8 available in a car this size from the factory, period. This particular motor is built on GM’s “big block” platform like its ancestors from the ‘60s, versus all official COPO Camaros produced from 2011 onward, which were available only in GM’s “small block” footprint, or its more modern LS-coded platform.

Using the big block’s larger engine casting, Chevy was able to significantly increase the engine’s internal volume by widening the diameter of each cylinder (called the “bore”) and increasing the distance that the piston can travel (“stroke”). These two dimensions make up the displacement of a motor in cubic inches—a measurement of how much air can be pumped through an engine. The 9.4-liter V8, for example, has a bore of roughly 4.6 inches and a stroke of 4.4 inches, yielding a total volume of 572 cubic inches across its eight cylinders. The small block 5.7-liter V8 has a bore of 4 inches and a stroke of about 3.5 inches, or 350 cubic inches.

Larger volume doesn’t necessarily mean more power out of the box. Displacement can generally translate into higher power outputs, but there are a number of other factors that influence an engine’s final horsepower.

The 2022 COPO Camaro’s flagship motor is its 5.7-liter small block. Thanks to a factory-fitted supercharger, this engine makes 600 horsepower. The 7.0-liter LS-based V8 is another option, though it offers a more modest 470 horsepower. And counterintuitively, at the bottom of the rankings sits the new 9.4-liter V8, which (despite its physical size) is rated at just 430 horsepower.

The 572, as GM calls the 9.4-liter due to its cylinder displacement, has been available to purchase as a standalone performance crate motor for years, making as much as 727-horsepower out of the box. The COPO Camaro, however, receives a significantly more watered-down version—but there’s a reason for that.

As part of the design process, these purpose-built Camaros receive a horsepower rating from the National Hot Rod Association (NHRA), the largest motorsports sanctioning body in the world. The organization works to host drag racing events all over the U.S., all of which contain different classes that cars can compete in. These classes help to ensure that a race is fair for participants by imposing restrictions on power, weight, safety equipment, and modifications.

Chevrolet’s race-only Camaro, for example, is used to compete in the NHRA’s Stock and Super Stock classes based on its weight and the classes’ modification limitations, both of which are then subdivided into small subclasses of competing cars. The NHRA determines which subclass a vehicle can participate in based on a ratio of the vehicle’s shipping weight to its horsepower rating, and can further limit classes if a vehicle consistently runs a quarter miles faster than the subclass’ index time.

Depending on which motor the vehicle is purchased with, its shipping weight and factory NHRA-certified horsepower will determine the class it competes in, and for the customers actually buying this car to race, that’s a big deal.

As for price, expect to foot out $105,000 for the vehicle packing the new 9.4-liter, or as much as $130,000 for the horsepower-hungry 5.7-liter. Chevrolet also offers the car as a rolling chassis where customers can bring their own engine, though a price isn’t listed due to limited production. All cars ship with a carbon fiber hood for weight savings and wheelie bars for safety. Plus, an optional trunk-mounted parachute can be equipped if desired.

Sadly, you won’t find a COPO Camaro roaming the streets. Despite looking similar to something that would end up on a dealer lot, the COPO isn’t a street-legal vehicle. Buyers who spring for one of GM’s most brawny rides will only get to use it on the drag strip—but that’s one of the reasons why the car still actually exists.