If you've ever felt confused by terms such as sedan, SUV, or hatchback, we're here to help. 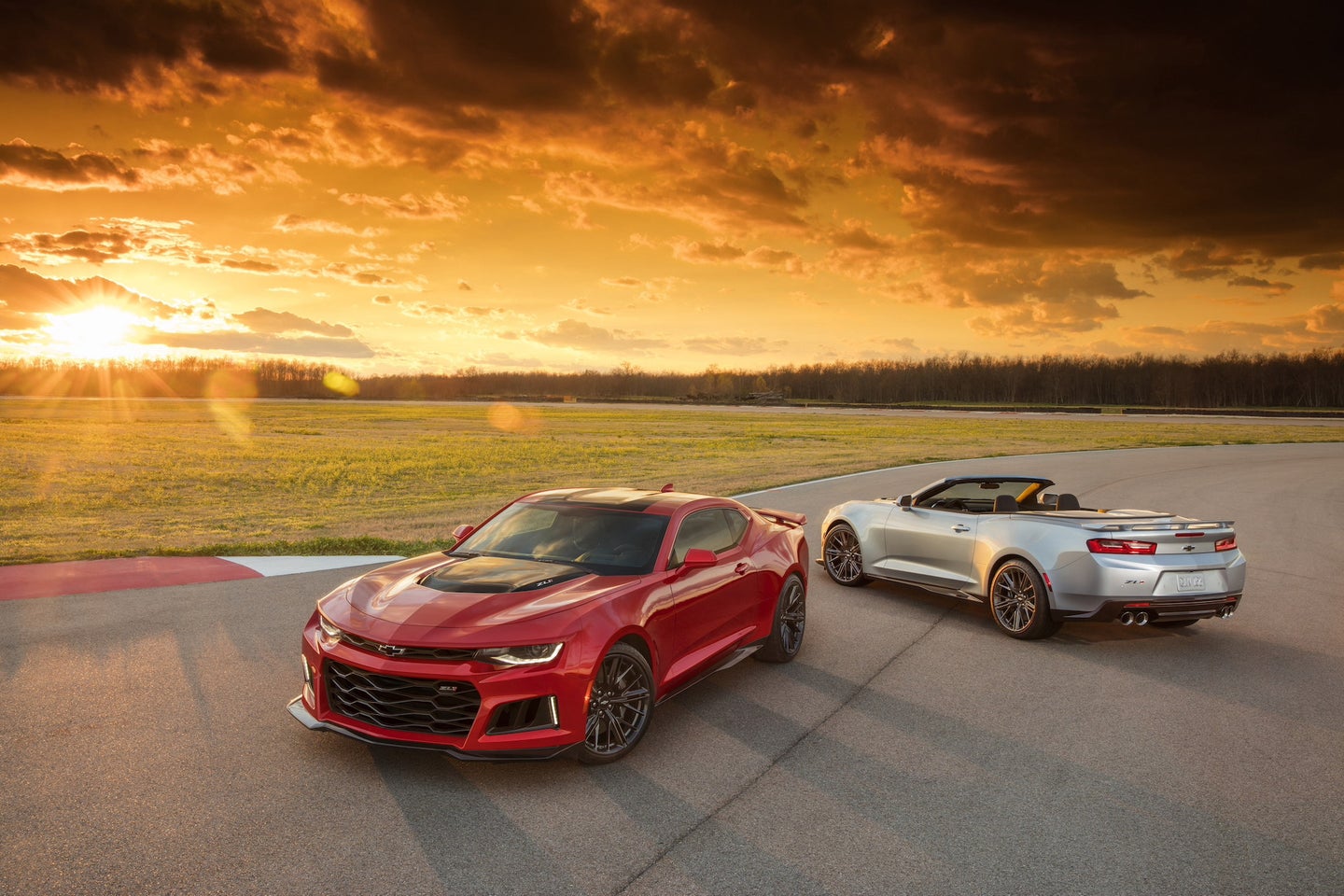 The 2018 Chevy Camaro. On the left, a coupe. On the right, a convertible. Chevrolet
SHARE

Car body styles evolve, and so too do their names.

We’ve seen the rise of the sport-utility vehicle (SUV) moniker, and as customers rush to SUVs, carmakers are trying to force other labels onto some of their products to help differentiate them.

The coupe body style has been particularly hard-hit, as fewer and fewer of the once-ubiquitous two-door cars roll into dealer showrooms with each new model year. As the coupe name looks to be dead, automakers are engaged in some unseemly rifling through their pockets for anything of value. Result? We’re saddled with ludicrous “SUV coupes” and “four-door coupes.”

Considering the turmoil in nomenclature, let’s review some names of various automotive body styles, from coupe to convertible to crossover.

This is a term that has become the subject of hot debate in car circles lately. The word is French, derived from “cut,” referring to a glass panel that cut the front seat from the rear. In common usage, it has generally referred to a sporty two-door car, especially in hardtop coupe form, with no fixed center pillar supporting the roof between the front and rear seats.

In the U.S. the word rhymes with “troop,” but in the rest of the world there is an accent on the “e,” so it rhymes with a fake hairpiece.

Coupes traditionally had two doors. Today, the slope of the rear roofline also plays a role in distinguishing them, but that wasn’t always the case. There were coupes such as the Cadillac Deville (originally called Coupe De Ville) and Ford Thunderbird with what was called a “formal” roof that had a nearly vertical rear window. The Oldsmobile Cutlass became America’s best-selling car from 1977 to 1981 and then again in 1983 by providing two-door “personal luxury” to customers at a mainstream price.

In automotive design, panels that slope toward horizontal are called “fast,” so a zoomy Lamborghini’s lie-back windshield is considered fast. When the rear window slopes that way, the car was called a fastback. The popular first-generation 1967-’73 Ford Mustang was touted in advertisements for being available in three distinct roof options: a hardtop coupe, a fastback, and a convertible.

As the formal roof, with a rear window near the vertical, fell out of favor in the 1990s, the remaining coupes tended to have fast rooflines. Today, cars that once might have been called two-door sedans are now called coupes just because they have two doors and a rear window that leans kind of flat. The Mercedes S-Class Coupe and BMW 8-Series coupe maintain the hardtop tradition, while coupes like the Ford Mustang and Chevrolet Camaro have thick “B” pillars supporting the roof between the front and rear seats.

With the evolving meaning of “coupe,” carmakers have evidently felt emboldened to claim new meanings for the world. So “four-door coupes” like the Volkswagen CC emerged. They were followed by four-door crossover SUV “coupes” like the BMW X4.

Traditionalists squeal at this sacrilege, while consumers shrug and buy the cars they like. Sometimes these are four-door crossover SUVs whose sloping rooflines earn them a “coupe” label. Time moves on, so maybe these four-door fastbacks are the coupes of the future, no matter what traditionalists may think. For now, we still like sporty two-doors as coupes.

A sedan was originally a chair carried by servants. In automotive usage it has meant an upright, less-sporty model. The modern Mercedes-Benz S-Class is a current example. Sedans did not necessarily have four doors, as two-door sedans were available for people too sedate for a rakish coupe but no need for an extra pair of doors.

The sedan is a dying breed, but the Toyota Camry and Honda Accord soldier on. Did you know that the Honda Accord was originally offered as a two-door hatchback? The arrival of the Accord Four-Door model in 1978 was a harbinger of the end of the hatchback and the age of the sedan, which continued until SUVs took over.

Some cars, as mentioned above, were basically convertibles with a fixed metal roof stretching from the windshield over the passenger cabin, without support pillars cluttering the cars’ flowing lines. Most of these cars were two-door models, like the ‘60s Chevy Malibu. But there were cars like the Lincoln Continental that were available as four-door hardtops.

A convertible is so named because the car “converts” from a closed-roof car similar to a hardtop to an open-roof car that lets in all the sunshine and fresh air. We’re all pretty familiar with models like the Mazda Miata and the ubiquitous sunny destination Ford Mustang convertible rental cars.

Convertibles mostly employ fabric stretched over a hinged metal framework to provide tent-like weather protection. But there are also folding hardtop convertibles with stowable rigid panels to enclose the cabin.

These cars provide the security and quiet of regular closed cars with the ability to enjoy open-air driving. However, the need to stow large panels can lead to some clunky, stuff-in-the-trunk styling for hardtop convertibles. Some models, like the Corvette Stingray, split the difference, with removable panels over the occupants.

Hatchback cars have a flip-up rear hatch for convenient access to the cargo compartment. Such cars typically have folding rear seats, lending them the practicality of a wagon or SUV. Some hatchbacks have upright rear glass, like the Volkswagen Golf, so they look like truncated wagons. Others have sleek fastback lines that provide sporty coupe styling combined with a dose of flexible practicality. The Audi A7 is a current example.

Station wagons were originally intended to provide conveyance for people to and from the train station, so they had cavernous rear cargo bays for transporting luggage. The archetypical wagon is possibly the 1960s-‘70s Ford Country Squire.

Station wagons have effectively been four-door sedans with a glassed-in cargo area where the trunk would have been. In many ways, today’s crossover SUVs are just station wagons that sit a little higher off the ground. So, while station wagons, like hatchbacks, might be considered nearly dead market segments, in truth the SUVs that dominate today’s car market are just an evolution of the old hatchback and station wagon body styles.

The term “Sport Utility Vehicle” was coined by Ford PR when the company introduced the original Bronco in 1965. That’s because off-roaders like the Bronco were generically called “jeeps” at that time, and Ford obviously didn’t want people calling the Bronco a “jeep.”

The Jeep people strenuously defend their brand from such generic use, which is why you see the ® mark after the Jeep name, but not other car brands.

[Related: The 2021 Ford Bronco lives up to its massive hype]

But during the 1980s, some families started using Jeep Grand Wagoneers and Chevrolet Suburbans as family haulers in place of traditional station wagons. The Department of Motor Vehicles often even titled these vehicles as “station wagons,” because no one was sure what to make of them.

Jeep launched the compact 1984 Cherokee in both two-door and four-door form, and was amazed to find the four-doors were much more popular. The conventional thinking at the time was that sport utility vehicles emphasized “sport,” and that the two-door models would appeal to young buyers as alternatives to the sporty coupes they tended to buy at that time.

Instead, buyers liked the “utility” half of the description and the market for four-door SUVs ignited. Ford took direct aim at these buyers with the Explorer and Jeep responded with the Grand Cherokee.

But off-roaders aren’t ideal station wagon replacements for families. So in 2004, Chrysler launched the Pacifica, a roomy wagon for families with no off-roading pretensions. Neither Chrysler nor the public knew how to pigeonhole the Pacifica, so this category was saddled with the confusing “crossover” moniker in reference to the fact that it is a cross between an SUV and a car.

Today “crossovers” are the most popular passenger vehicles and it looks like these tall station wagons will soon make most traditional cars go extinct. As dinosaurs appeared to die out when they actually evolved into birds, so it will be with cars as they turn into crossovers.

That’s why the Mustang Mach-E electric car exists. The day will likely come when there is no Mustang coupe, and Ford doesn’t want its most powerful model brand to go the way of the brontosaurus.