The Joint Light Tactical Vehicles are following in the Humvee's footsteps. Here's how the two machines compare. 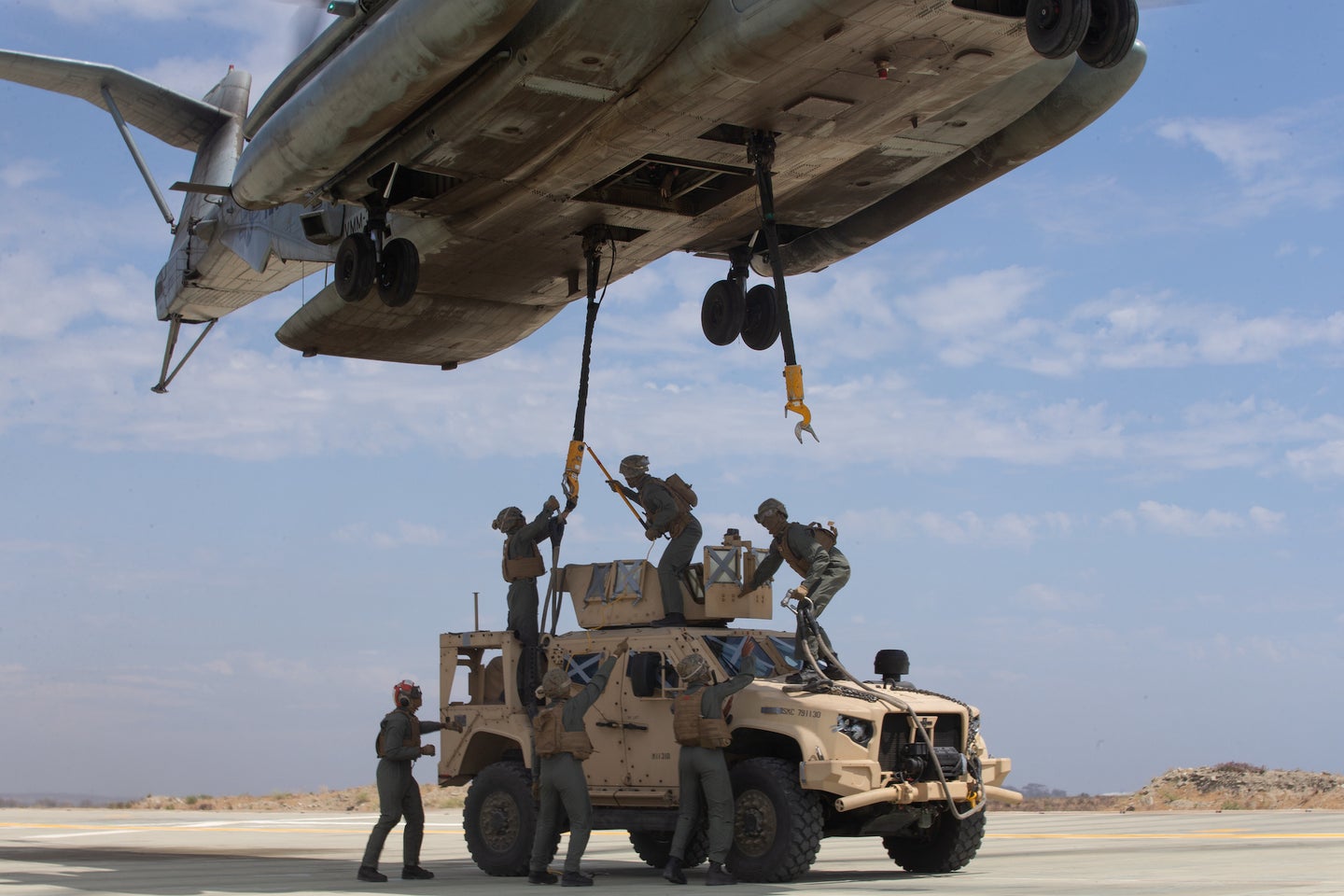 A Joint Light Tactical Vehicle beneath a Super Stallion helicopter in California in June. US Marine Corps / Nicolas Atehortua
SHARE

Later this year, the Army plans to order full production of a ride called the Joint Light Tactical Vehicle, or JLTV. It may, by 2041, number about 49,000. The JLTV, which the Pentagon insists isn’t a “one for one” replacement to the widely used Humvee family of vehicles, is still best understood as informed by the limitations of Humvees. As production increases and the Army prepares to use the JLTV even more, it’s helpful to understand what role it is filling, how it does that, and what tasks will still be left to Humvees.

The base model of the JLTV is a four-seat vehicle that comes in several configurations. It can be general purpose, or a Heavy Guns Carrier version with a gun turret on top and room for a fifth occupant, or the Close Combat Weapons Carrier, which has a turret for soldier-fired anti-vehicle weapons like TOW missiles. There’s also a two-seat utility version.

As a “joint” vehicle, the JLTV is used primarily by the Army, but also in great numbers by the Marine Corps, and smaller numbers by the Air Force and Navy. The British Army has also purchased JLTVs.

What is most immediately striking about the JLTV is its high clearance, allowing the four-wheeled vehicle to bound over narrow trenches, climb wide hills and gravel ramps, and even keep going over felled logs. Oshkosh Defense, which made the initial 16,000 vehicle production run of JLTVs, emphasizes that the wheels can travel 20 inches independently, allowing it to roll over rough terrain.

The main selling point of the vehicle, and the feature highlighted upon its initial production in 2015, is that it is designed to protect the crew inside from IEDs (improvised explosive devices), and other roadside bombs. As the Army and Marine Corps learned in nearly two decades of fighting in Afghanstan, and especially in the many years of the Iraq War, a light transport designed for moving quickly across open field is vulnerable when faced with urban ambushes, hidden bombs, and other threats.

To understand the JLTV, it helps to understand the vehicle it’s designed to supplement and serve alongside, the High Mobility Multipurpose Wheeled Vehicle (HMMWV), or Humvee.

Like the Bradley family of Fighting Vehicles and Abrams tanks, the Humvee was built for combat on the open plains of Europe but first saw action as part of 1991 Operation Desert Storm against Iraq. In June 1991, Popular Science referred to them as a “jack-of-all-trades of Desert Storm,” noting that they “served as cargo and troop carriers, ambulances, TOW missile trucks, and communications equipment transporters.”

By carrying the missiles and the troops into battle, the Humvee could get teams near enemy vehicles, fire missiles in an ambush, and drive away. In the Persian Gulf war, in which fronts moved so quickly that it was hard for defenders to set up defenses, much less lay mines or booby-trap roads, Humvees performed well.

“Over the past 20 years, the purpose and use of the Army’s tactical wheeled vehicles have dramatically changed,” wrote William P. Canaley of the  Army National Guard in a 2013 case study on the Joint Light Tactical Vehicle. “Originally designed as a thin-skinned vehicle, deployed primarily in a logistics centric role, behind what was once considered the forward line of troops on a linear battlefield, is now an armored vehicle, required to survive in an ever-increasing threat environment in both a logistics and weapons-carrying platform role.”

Ambush-heavy warfare, especially in Iraq after 2004, limited the areas that Humvees could be safely operated. In response, in 2007 the Pentagon started adopting heavy Mine-Resistant, Ambush-Protected vehicles (MRAPs) to use in patrols. MRAPS, while better at protecting occupants from the immediate harm of an ambush, are also three times as likely as a Humvee to roll over, and often much slower.

The JLTV is an attempt to get back to the speed of moving by Humvee, without giving up the lessons of how to survive roadside bombs. One weakness of the MRAPs adopted for patrols in Iraq and Afghanistan was that rollover risk and heavy weight meant they had to stick to roads. These vehicles’ armor, especially v-shaped hulls to deflect the immediate force of an explosion, let the troops inside survive initial attacks, but the limited places they could drive also meant it was easier for hostile forces to plan ambushes.

As an off-road vehicle, the JLTV can travel beyond roads when in combat. The JLTV also comes with some armor already on the vehicle, but with kits for further armor that can be added on when deployed. This lets the base model be lighter by default, while those used in heavy combat can be adapted to fit.

Often those kits will have to be transported separately from the vehicle, which is still designed to be light enough that it can be carried underneath a cargo helicopter or inside a transport plane.

Ultimately, the JLTV will still serve alongside tens of thousands of Humvees. What it will bring to the fight is better protection against roadside bombs, a modern ecosystem of armor and upgrades, and the ability once more to speed ahead to the fight, letting soldiers set up in forests and foothills and ambush enemies as they find them.