It takes a wing, a spoiler, and more to keep the CT4-V Blackwing firmly pressed against the asphalt. Here's how it all works. 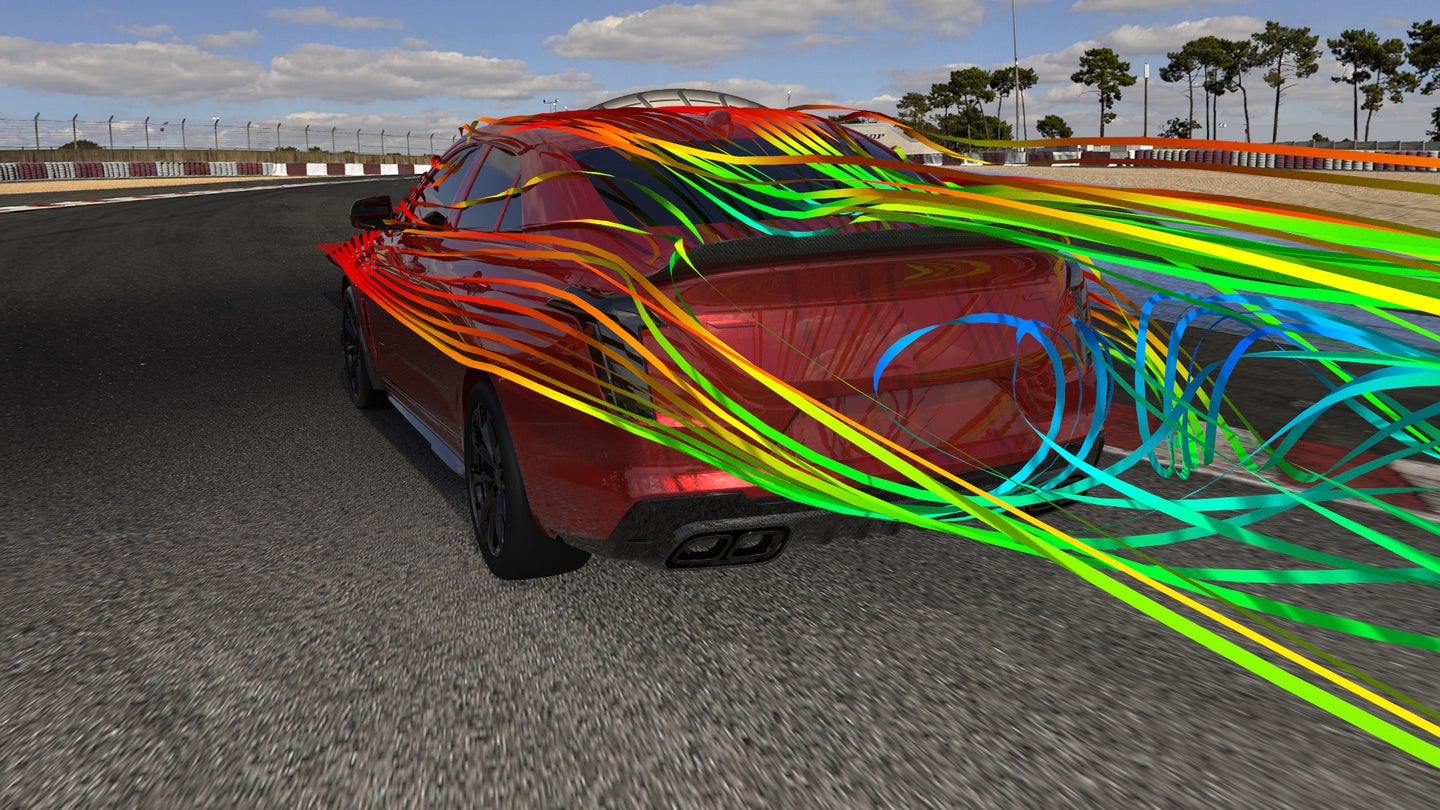 Airplanes fly because their wings generate lift. Their engines provide thrust, the aircraft races forward, and the wings’ lift helps the vehicle take to the sky.

Cars are different, of course. They don’t have wings, and they can’t fly, unless you’re watching a scene in a Fast and Furious film or some sort of dangerous stunt. (Although some companies are indeed working on flying taxis.) But car designers still need to consider how a vehicle’s aerodynamics affect its performance on the road, and not just in terms of factors such as drag or gas mileage. They want the tires to have a good level of grip on the asphalt so that the driver can have a sense of control on the highway.

“Cars tend to act like a wing at speed,” says Tony Roma, the chief engineer of Cadillac’s 2022 CT4-V Blackwing, a performance luxury sedan from the GM-owned brand that comes out late this summer. The main reasons they tend to do that, he says, is because of the effect of the air accelerating over the top of it, as well as the air rushing into the radiator and pushing the front-end upwards. It was a bigger problem with older cars. “We’ve all driven cars and trucks at high speed, and you can feel the steering start to get lighter.”

So with vehicles like the Blackwing, engineers carefully tune the aerodynamics so that the vehicle doesn’t get lighter on its tires and thus lose performance and stability. If the aerodynamic design on an aircraft exists to make it fly, the design on a car like this one exists to keep it pressed down on the road. “We don’t want it to leave the ground,” he says. “We want it to stay as firmly attached to the ground as possible, because unlike an airplane, we don’t have a rudder in order to change direction—we need the tires to do all that work.”

To keep this Cadillac down to earth, the engineers tweaked the way the air flows over and under the vehicle. One way they did this was with something easily noticeable on the rear of many cars: a spoiler.

The spoiler at the back of some cars received its name because of the way it affects the air that goes over it. “It spoils the air at the back of the car,” Roma says. (Think of it like sticking your hand out the window of a car on the highway: It’s messing up the air flow.) “The spoiler takes away some of that lift on the rear.”

In other words, it’s preventing the back end of the vehicle from getting lighter at speed. That’s usually why an automaker will put a spoiler on the back, but there are other reasons to do so. One is actually to do the opposite: engineers might want to smooth the airflow to decrease drag. If a carmaker isn’t creating a high-performance vehicle, and isn’t concerned with mitigating lift, adding a spoiler-type apparatus at the back can serve to smooth the air out. But with a vehicle like the Blackwing, the spoiler is all about the lift issue. “We’re doing it for the lift aspect, and we try and not add too much more drag.” And remember, they’re doing all this to mitigate lift, not cause it.

Roma is also concerned about the front of the car, where the same issue is at play: They want to keep the front pressing down on the ground, or at least not lifting up too much. While multiple components up front influence the air flow, the one that’s easiest to grok is called an underwing. The underwing is a curved component underneath the front end that’s designed to accelerate the air that flows under the car, creating a low-pressure area that pulls that part of the car downwards. In short, the spoiler in the rear and the underwing in the front work together to keep the car’s rubber on the road.

In fact, Roma says that at high speeds, the combined effects of both the underwing, the spoiler, and other components serve to actually add weight to the car by forcing it downwards, an effect seen with the CT4-V Blackwing in one of its fancier carbon fiber options. (That starts at $64,570.) That downward force is greater at the rear than the front—the spoiler causes a downforce in the back, while at the front, the underwing and other components nearly cancel out the lift the front-end experiences.

Imagine a wind-tunnel test with fast air blowing over the vehicle and scales underneath each of the four tires to measure how they’re pushing against the ground. “The car gets heavier when you turn up the fan speed—the rear-end scales measure more force,” Roma explains. Meanwhile, the lift in the front, mitigated by its aerodynamic design, only slightly increases. “That’s [a] huge success in production car world, to have the front end change barely at all.” In total, Cadillac says that if you were to drive at about 160 miles per hour in the CT4-V Blackwing with its first-level carbon fiber package, the vehicle would produce about 133 pounds of downforce.

The next time you see a spoiler on the back of a vehicle, you can attribute its existence to the fact that the automaker either wanted to mitigate lift, or perhaps decrease drag. Oh, and there’s a third reason a vehicle might have one. “Sometimes the styling guys just think it looks pretty,” Roma says. “Sometimes they’re just cosmetic.”