The US Navy made news this week by announcing a new type of autonomous robotic boat for protecting its fleet,... 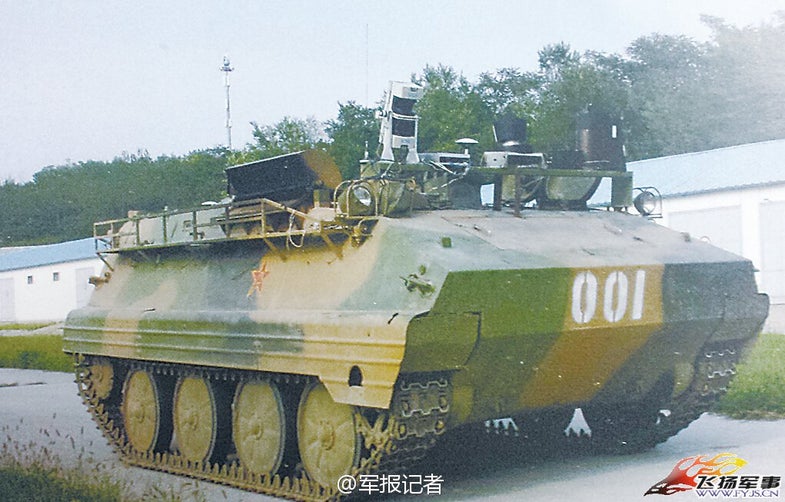 The ZSD-63 is one of China's first AFVs, having entered into service in the 1960s, with multiple hospital, recon, mortar, troop transport and antitank variants. This ZSD-63 have been modified to drive autonomously, as indicated by the three front mounted sensors, which include video cameras, and presumably LIDAR and radar for navigation. AssassinsMace via www.fjys.cn
SHARE 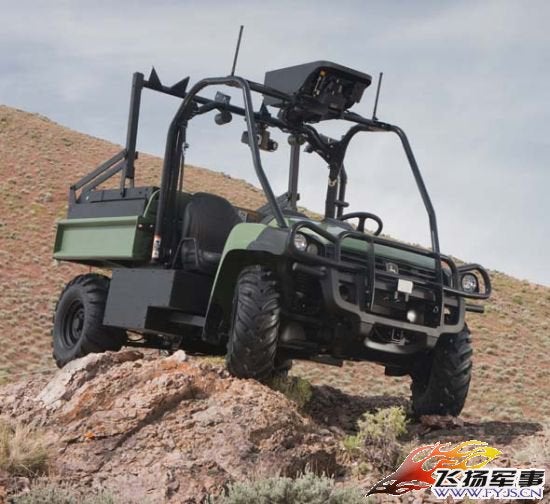 A Most Unusual ATV

This ATV has been equipped to drive by itself. The sensor box has been mounted high as possible to give it wide a field of view as possible. A self driving ATV might appeal to a lazy outdoorsman and doesn’t scream intimidation, but its larger Chinese autonomous cousins, like the ZSD-63 armored personnel carrier, certainly will grab anyone’s attention.

The US Navy made news this week by announcing a new type of autonomous robotic boat for protecting its fleet, but China is showing that it can play the same game, just on the land. 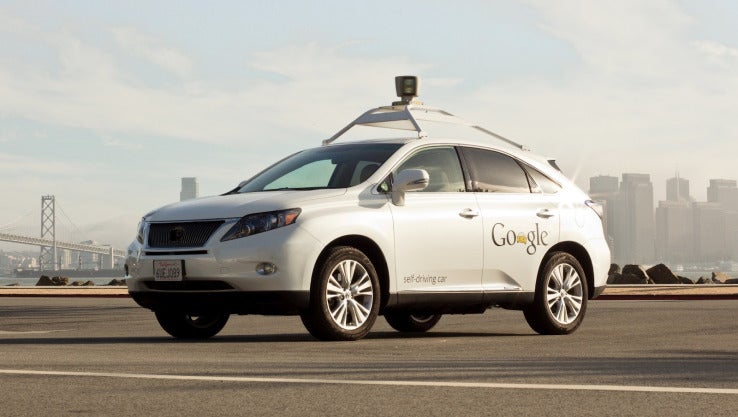 This Google Self Driving Car is a combination of a Lexus SUV, alongside a top mounted sensor mount, and software and controls to actually drive the car. Military autonomous ground vehicles would like to have multiple sensor mounts, to increase the amount of data available (and if in case somebody shoots out one of the sensors).

While the the US military has deployed over 12,000 unmanned ground systems in its operations in Iraq and Afghanistan, such as the iRobot Packbot and Foster Miller Talon, they have been remotely operated and mostly of small size. The only large vehicle types, such as the BAE Black Knight light tank, have been test systems, never deployed. Akin to the difference between a RC toy and a Google Car, autonomous vehicles differ from such remotely operated systems by using data from onboard sensors to navigate through off-road and urban terrain without human input. In the category of Armored Fighting Vehicles (AFV), the only American autonomous systems have been technology demonstrators like the National Robotics Engineering Center’s Crusher and Army Research Lab ‘s XUV, not based off of existing U.S. AFV chassis. 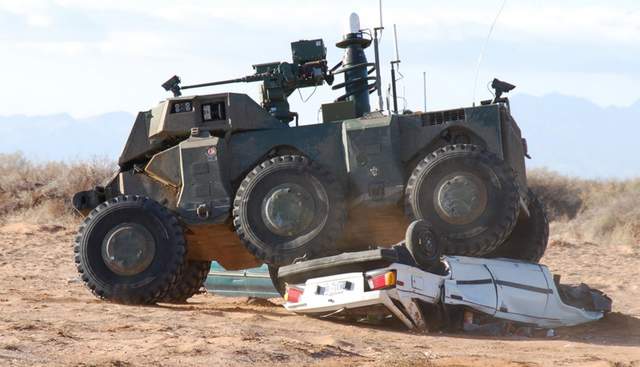 Crusher Lives Up to Its Name

The Crusher autonomous robot, designed by Carnegie Mellon University for DARPA, is shown here living up to its name by crushing a hapless sedan under its 13,200 pound weight. While not intended to be an operational platform, the U.S. Army hopes that related technology can contribute to future ground robots. 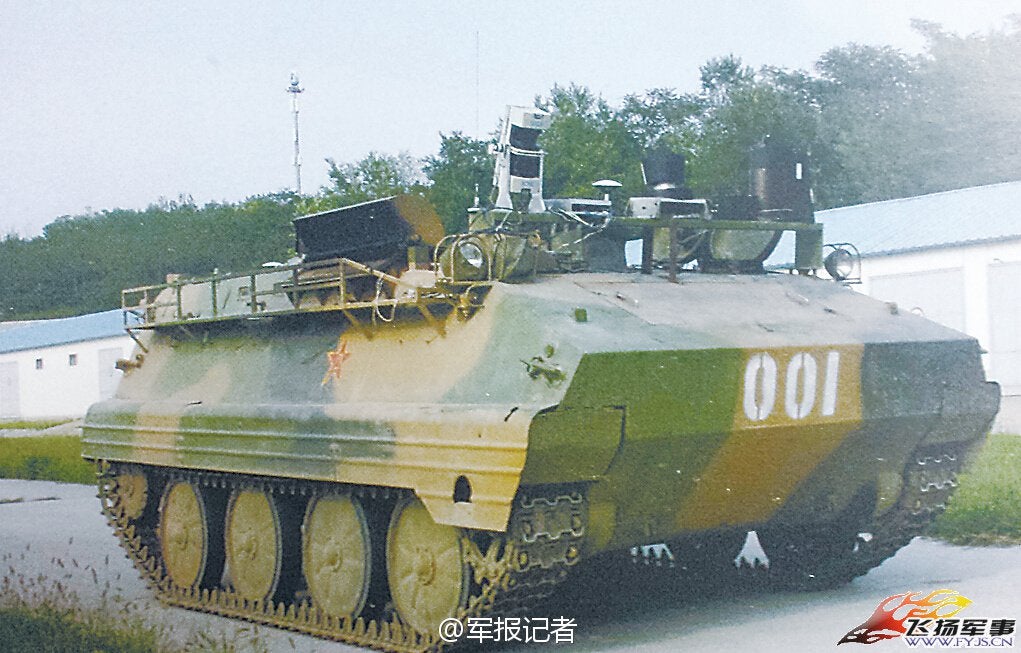 The ZSD-63 is one of China’s first AFVs, having entered into service in the 1960s, with multiple hospital, recon, mortar, troop transport and antitank variants. This ZSD-63 have been modified to drive autonomously, as indicated by the three front mounted sensors, which include video cameras, and presumably LIDAR and radar for navigation.

By contrast, the sudden variety of Chinese self driving AFVs is unprecedented in that they are based of of existing military platforms, in essence offering the possibility of turning current manned fighting vehicles into future unmanned ones. One autonomous AFV is based on the versatile ZSD-63 tracked APC, whose manned version first entered service in the PLA in the 1960s and has been armed with anti-tank missiles, mortars and auto cannons. The three LIDAR, radar, and video camera stations mounted on the front of the ZSD-63, around its crew hatches, would suggest that in contrast to civilian driverless vehicles like Google Car (which has one), military autonomous vehicles need more sensor data to fulfill recon and resupply missions, and possibly future combat and engineering missions. 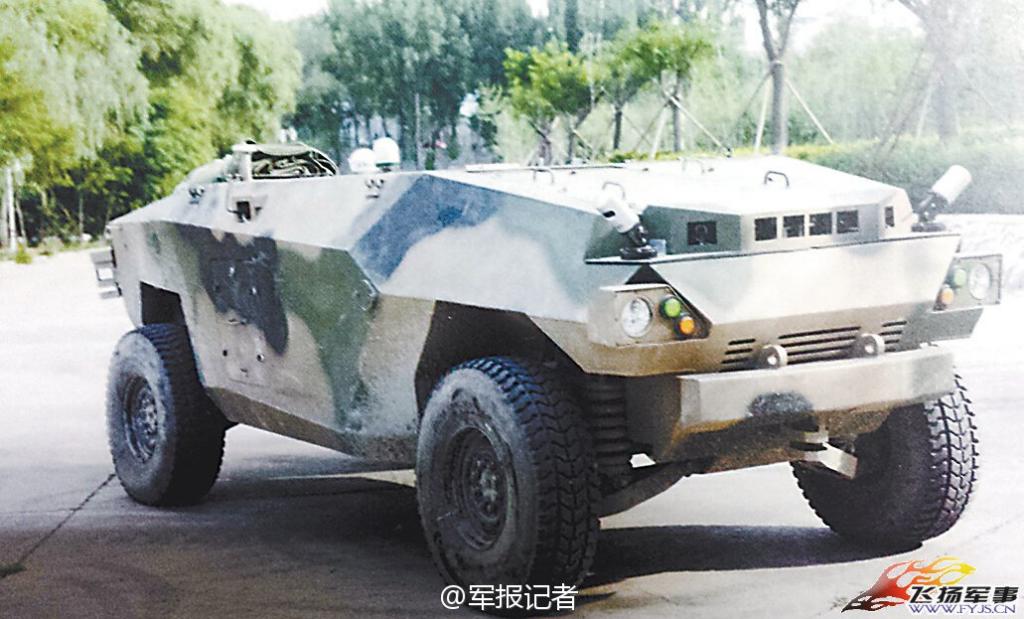 This 4X4 autonomous AFV has been heavily modified for unmanned operations, including removing most of the passenger and drive compartment to reduce weight and improve visibility for sensors, which are mounted on the bumper, and where the back seat would normally be. Apparently, this robot started life out as a QLL-05 reconnaissance armored car.

Some of the other Chinese autonomous vehicles have less sensors. The QLL-05 (?) 4X4 recon AFV has two white sensor dome mounted in its rear seats, along with two video cameras on its front bumper, just above the headlights. A HMMVV Dongfeng EQ2050 (license built from American Motors!) has had its passenger and driven compartment cut off and sealed; presumably most of its sensors are intended to pop up from the trunk during operations. Finally, an unidentified airborne AFV chassis has bumper mounted front cameras and a central sensor mast. 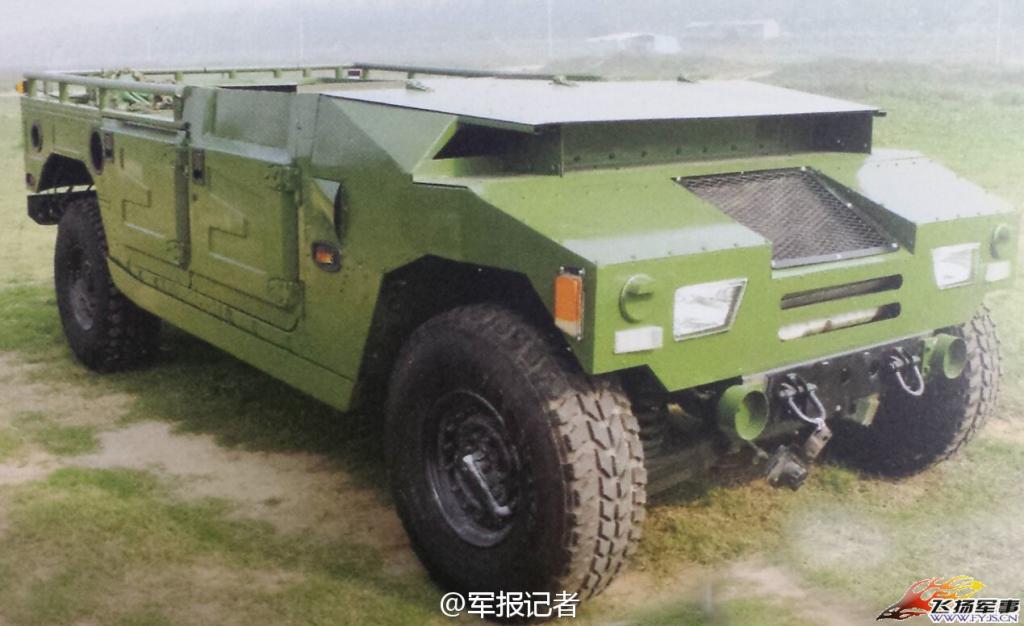 This Humvee started out as a product of Dongfeng Motors, who licensed the original design from American Motors. It’s top half has been chopped off, as is apparently standard for autonomous Chinese AFVs, the sensors presumably would pop out of the backseat during driving. Gas mileage is probably as bad as its American progenitor. 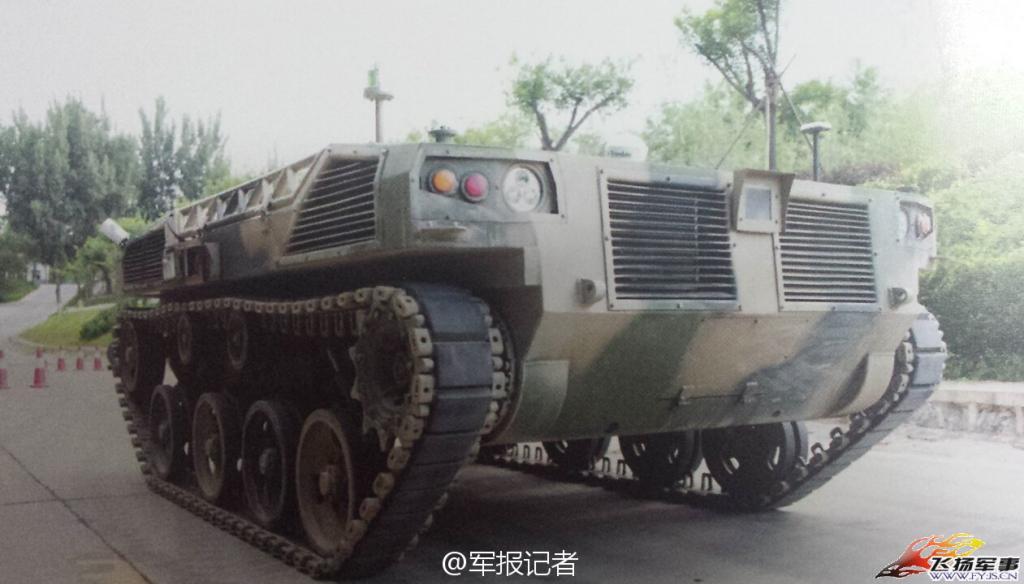 This as yet unidentified AFV appears to have been originally designed for airborne (read parachute dropped) operations, given its light weight, thin armor and narrow tracks. Like its manned counterparts, this autonomous AFV could be paradropped straight into combat (generally, the crew of paradropped vehicles have to parachute separately, to avoid injuries that usually come with being dropped onto the ground inside a large metal box).

These AFVs could have been modified simply for remote operations, though that possibility is rather unlikely. Given that China already has developed remotely operated robot prototypes for mineclearing similar to the iRobot Warrior, it would be of questionable benefit to transition that established technology onto this wide variety of vehicle sized AFVs. Also, the simplest remotely operated ground vehicles are usually equipped with just video cameras, as opposed to LIDAR and radar sensors. 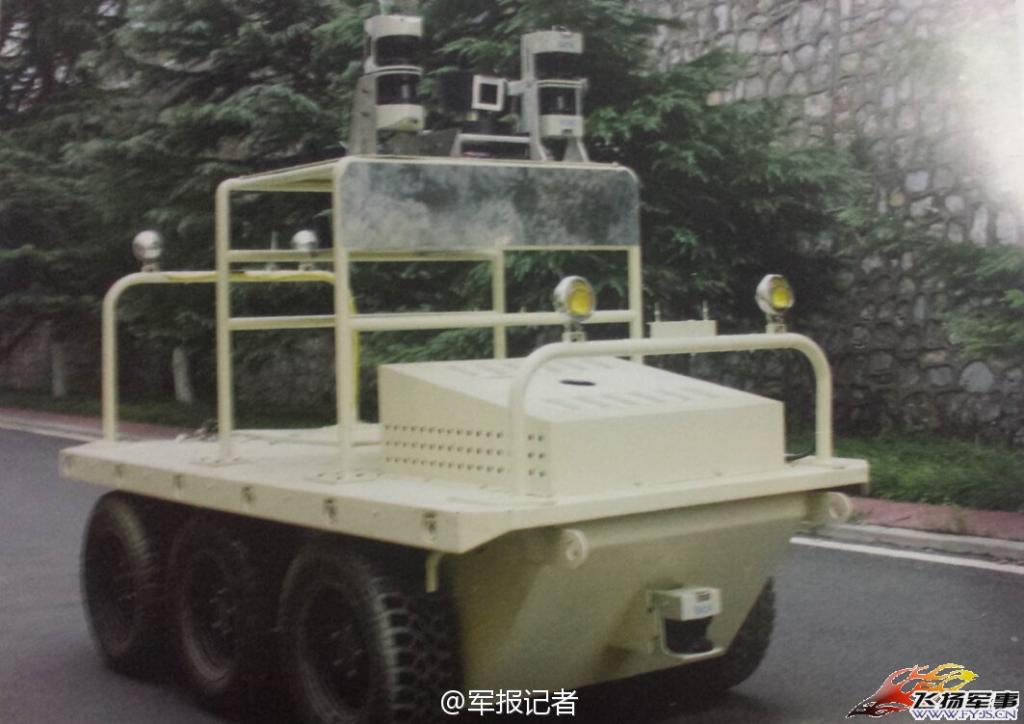 Chinese airmobile infantry and special forces have used all terrain vehicles (ATVs) during exercises as a light but rapid mode of transport and convenient means to move fire support around. Now, the ATVs are learning to drive themselves. 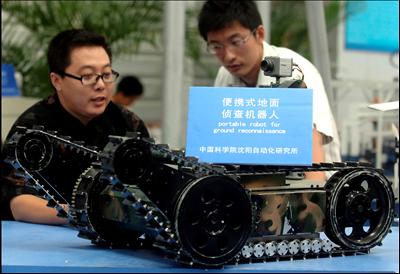 This portable robot, intended for ground reconnaissance, was developed and shown at the Fifth China International Equipment Manufacturing Exposition held in Shenyang, China on August 29, 2006. It takes after the layout of the iRobot Packbot, which first appeared in 2002. This robot is apparently remotely operated, via a datalink to its human controller, who would be out of danger’s range.

Like U.S. Military plans, China is first likely to use autonomous ground vehicles for mine clearing, reconnaissance and resupply missions; besides the legal and policy issues, the limits of present day AI means that any weapons would likely require human permission…for now.

Many thanks to AssassinsMace at Sinodefence Forum