Plus, if you do need to stop, it counts down the time until it turns green for you. 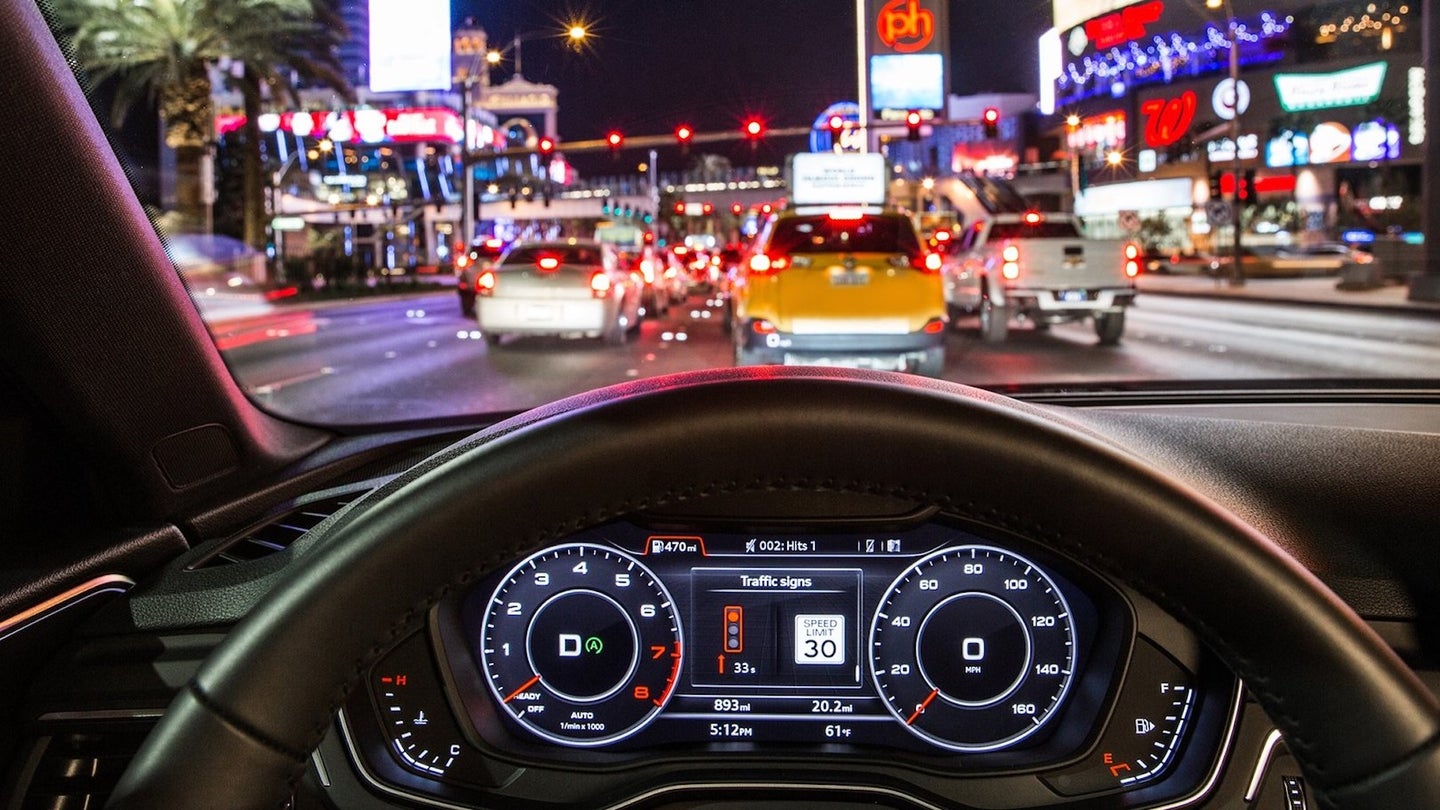 Bragging about making great time on a trip is every commuter’s dream, even if it’s arriving only five minutes before the expected arrival. There’s just one little hindrance that often gets in the way: traffic signals.

Hitting a red light annoyingly interrupts a smooth cruise through the greens, of course, but fortunately, Audi has been working on an answer to this problem using a form of in-car technology it calls the Traffic Light Information (TLI) system.

As an Audi equipped with the TLI system drives along a roadway, the car’s cellular radio downloads real-time updates on the status of nearby traffic lights, supplied by participating local traffic control centers. The car then uses its GPS system to understand where the vehicle is in relation to these devices at any given time. If a connected traffic light is along the car’s immediate route, the vehicle’s instrument cluster will relay information to the driver on how fast he or she needs to drive in order to ride the green wave of lights from one end of a city to the next.

Audi first brought the current-generation traffic light tech to its cars in 2016. At the time, the service was limited to just Portland, Oregon and Las Vegas. And to further complicate the rollout, many local traffic agencies weren’t yet equipped with compatible infrastructure necessary to supply this data to Audi. But as internet-equipped devices became more commonplace, partnering entities began to modernize their traffic networks. The TLI coverage area grew. In one case, a municipality even replaced an entire city’s 20-year-old traffic hardware just to be compatible with the German automaker’s program.

Sometimes though, a red light is unavoidable. The system can also recognize this and will inform the driver of the impending stoppage. However, it then begins to count down the remaining time before the signal turns green again, removing the unknown waiting period from the driving experience.

The secret sauce behind this technology is the evolving Vehicle-to-Infrastructure (V2I) and Cellular Vehicle-to-Everything (C-V2X) frameworks being deployed by state and local governments. Essentially, V2I works by allowing compatible vehicles the ability to share data from its in-car sensors with connected infrastructure. This might be through the use of a cellular LTE radio beaming data back and forth to an automaker’s servers (C-V2X), or by using short-range radios to communicate with compatible roadside units (V2I). The car can also ingest information relevant to nearby roadways, including data which could indicate potential congestion, road conditions, upcoming construction sites, and much more.

The real-time updates are the most important part of this offering. Traffic controls deployed across America today are becoming increasingly responsive to dynamic conditions in order to better manage vehicular congestion. Instead of just setting a light signal on a timer, many systems now use sensors to detect the amount of traffic in a particular area, or even the number of cars waiting at an intersection. The data is then analyzed instantaneously and signal timing can be adjusted accordingly.

As an added benefit to the local traffic control center, Audi shares anonymous telematic data that it collects from its vehicles. This gives the pertinent agency data on how frequently the connected vehicles stop at red lights, how long they remain stationary, which can help to pinpoint problematic stretches of road.

The collaborative service has already expanded across the United States. Recently, a large number of intersections in Los Angeles, San Francisco, and New York were added to the program, bringing the total number of reporting junctions upwards of 22,000 across the US, Canada, and Europe.

For consumers, this type of connected feature might help to reduce not just overall travel time, but also stress behind the wheel that results from repeat stop-and-go traffic. Plus, gone is the unknown amount of time waiting for a traffic light to turn thanks to the time-to-green countdown at supported intersections. Drivers may also notice a difference in their wallets, as predictable routes with less stoppage at red lights can improve a vehicle’s fuel economy by as much as 15 percent, according to a study from the United States Department of Transportation.

As V2I and other wireless vehicle communication protocols evolve over time, connected cars may provide data useful for vehicles equipped with automated driving capabilities. The collaboration between automakers like Audi and local government agencies with programs like the Traffic Light Information service is modernizing aging traffic infrastructure, giving consumers a glimpse into the rapidly approaching future of connected driving.