It could be the next light armored transport for the French Army. 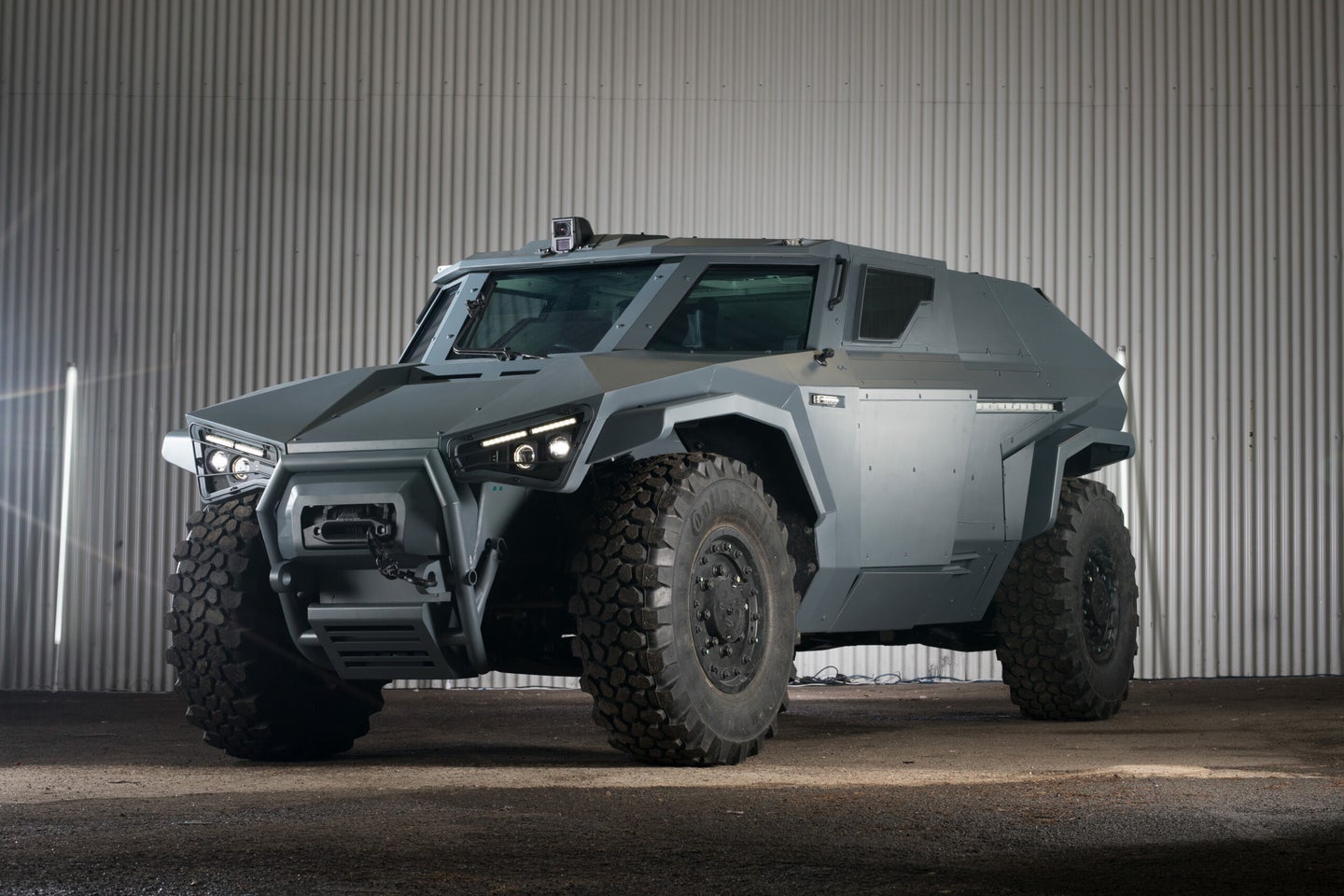 You probably haven’t heard of Arquus, a French defense and security vehicle firm, but you likely do know the company that owns it: Sweden’s Volvo Group. And from this subdivision of Volvo comes a new, light army vehicle: it’s called Scarabée, which is French for “beetle.”

The team’s mission at Arquus was to develop an armored military vehicle that is fast, stealthy, and highly maneuverable. Plus, it has two engines (one electric, one diesel), is remotely-controllable, and is able to carry over two tons of equipment, including weapons. It’s even transportable and droppable from a low height, sans parachute, by plane. Scarabée, which is smaller and faster than an American Humvee, is a candidate to replace the French Army’s fleet of 730 light armored vehicles by 2025.

Composite materials and new assembly processes give the machine protection against bullets, blasts, and mines. “We really worked on the speed because that is also a form of protection,” Emmanuel Levacher, the chief executive of Arquus, explains. “If you put a lot of protective armor on a vehicle it makes it very heavy, big, and therefore slow unless you give it a large, powerful engine—in which case you no longer have a small, agile military vehicle.”

The 6-foot high, 15-foot wide, four-person vehicle weighs 6.6 tons empty. It can drive at over 75 mph and can accelerate quickly, providing almost 60hp per ton compared to around 20hp per ton for a Humvee. For that acceleration, it needs both its 300hp diesel engine and its electric 103hp motor to be engaged at the same time; the acceleration provided would be sufficient to allow it to dodge an incoming anti-tank missile, for example.

Both engines are in the back. The diesel engine can go for up to 620 miles, while the electric motor, powered by two batteries set underneath the body to provide additional protection from mines and improvised explosive devices (IEDs), would last about six miles.

Scarabée is probably a bit of a misnomer. “Crab” may be more appropriate, because it can move like one: sideways. It can not only sharply “sidestep” obstacles on the road, such as mines, but also has a tight turning radius. That’s because its four wheels are all powered, like a 4×4, but also (unlike the 4×4 you may have in your garage) the front and back wheels can all be turned in the same direction, or in opposite ones. So, if the driver wanted to turn the vehicle around on the spot, they would turn the back wheels in one direction and the front ones in another. If the driver wanted the crab effect, then they would turn all the wheels in the same direction.

“That way you can approach the enemy without either turning your back to him or being full front on, but you could also drive crab-like behind a ridge, for example, and yet still have your roof-top gun with its limited turn radius pointing at the enemy,” a spokesperson for the company says.

The vehicle has two sliding doors so the crew can get in and out easily even in small spaces, such as in narrow streets, where a hinged door would be an impediment. To open the doors from outside you need to have the remote control—there are no handles. This provides additional security for the crew inside.

On its roof, the vehicle can carry radar units or weapons such as a 12.7mm heavy machine-gun turret, a 30mm gun to fire anti-tank shells, or a medium-range missile launcher.

Scarabée’s engine control system, brakes, steering and gearbox were developed by Volvo or its suppliers. To reduce Scarabée’s fuel consumption, for example, developers tapped into the research Volvo Trucks undertook to develop the first fully electrically-powered truck in 2016, but also equipped the vehicle with energy-efficient tires.

Scarabée also makes use of innovations in the robotization sector developed by both Volvo and Arquus, which is a combination of the Latin words for war-horse: Armis Equus. “It was important for us to develop a military vehicle that can be remotely controlled even when it is off-road,” Lavacher remarks. Scarabée can be controlled from afar “even beyond the line of sight of the operator.” In the future, the company is working on the idea of using a drone which could inform the vehicle of unexpected obstacles on its route.

Last, but not least, Scarabée has a motorized, electric trailer that can carry an additional four tons of equipment. The trailer is also robotized so can be used as an independent mule. For example, one Scarabée crew could leave the trailer somewhere and another crew, some distance away on another vehicle, can “call” the trailer to join them.