The swimming fighting truck of the future will resist mines 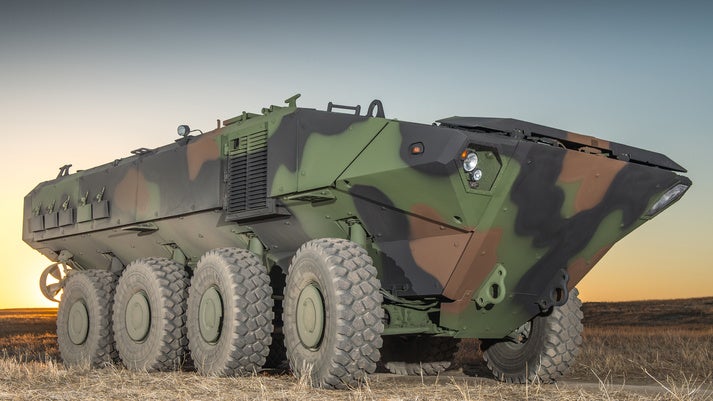 A U.S. Marine is nothing if not an amphibian (it’s intrinsic to the very name of the branch itself). The ship-to-shore component of America’s armed forces exists to fight battles on the edge of land and the edge of the sea. Getting from ship to shore, and being able to fight the moment they arrive, are key parts of the United States Marine Corps mission and identity, if not necessarily skills they’ve spent a lot of time honing in the past 15 years of the “War on Terror.” In order to fight future wars, includings ones with a lot more coastal water, the Marine Corps yesterday announced which companies would get to build prototypes of its new Amphibious Combat Vehicle.

The Corps first started looking for a new amphibious vehicle back in 2011. Their current floating swimming waterproof truck, the Assault Amphibious Vehicle, entered service with the Marines in the 1970s.

This aging armored vehicle can move at up to 10 miles-per-hour in the water and up to 45 mph on the land, carries 21 Marines in the back (not counting its 3-Marine crew), has a grenade launcher and a .50 caliber machine gun for protection, and can drive up to 300 miles on shore once it lands. An improvement over previous landing craft like World War II’s iconic Higgins boats, the vehicle doesn’t just carry troops to shore, it goes with them into battle and helps ensure they can take the beach and keep on going.

Replacing the Assault Amphibious Vehicle means doing all of the same, while adding new features. One major limitation of the old vehicle is that it had to launch from a ship within two miles of the coast. Plenty of anti-tank missiles have ranges close to or over two miles. Besides the risk to the transports themselves, being that close to shore is dangerous for the ships unloading the landing craft, as it puts them in very close range for a variety of anti-ship weapons.

The new requirements for the Amphibious Combat vehicle reduce the number of Marines carried inside, but increase the distance traveled six times, so they can travel up to 12 miles before needing to hit land. It will have wheels, unlike the tracks of its predecessor, and to fit with current threats, it will have some protection against landmines and improvised explosive devices (IEDs).

Defense contractors BAE and SAIC will both build at least 13 models of their prototype of the Amphibious Combat Vehicle (with an option to build 3 more), as the next stage of vehicle selection. The vehicle ultimately selected will likely define how the Marine Corps fights for decades to come, especially in any conflicts in the Pacific. In “21st Century Ellis,” Marine Corps Captain B. A. Friedman’s work adapting the Marine strategist for the modern age, Friedman writes:

If production goes well, getting skilled Marines to the shores of 21st century conflicts will be the job of the Amphibious Combat Vehicle.