Designed by Caltech engineers, LEO can both walk and fly, allowing it to navigate smartly in complex environments. 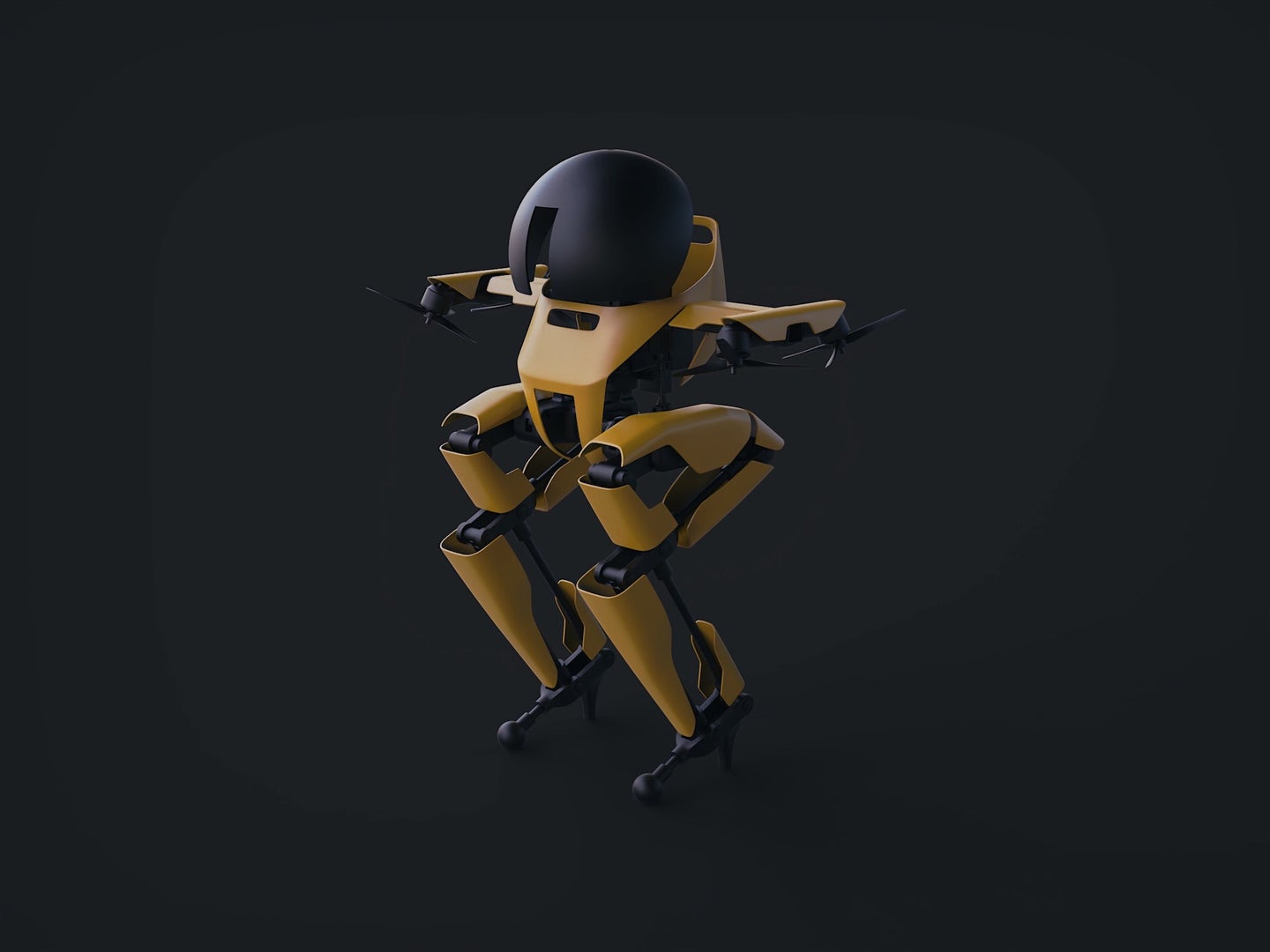 LEO wobbles when it walks, but has incredible balance. Caltech
SHARE

Meet LEO: a robot that can walk on two legs, fly, hop, skateboard, and even slackline.

This mix between a drone and a traditional robot was developed by a team at Caltech’s Center for Autonomous Systems and Technologies, and its creators claim that LEO is the first robot with both multi-joint legs and propeller-based thrusters—which helps it fly and allows it to achieve a high degree of balance control. They further detailed LEO’s range of capabilities and potentials in a new paper published this week in Science Robotics.

Caltech engineers modeled the design for LEO, which is short for LEONARDO (LEgs ONboARD drOne), after birds, which can move about and maneuver through a variety of environments with relative ease.

“Think about the way birds are able to flap and hop to navigate telephone lines,” Soon-Jo Chung, the corresponding author on the paper and a professor at Caltech, said in a press release. “A complex yet intriguing behavior happens as birds move between walking and flying.” They wanted to transpose this ability onto a robot, which would allow for it to traverse through tricky landscapes.

LEO is 2.5 feet tall, and its two carbon fiber legs are each broken down into three actuated joints. There’s a heel design at the tip of the robot legs that stabilizes the robot when it’s standing still, and makes it look like it’s wearing tiny stilettos.

It has sensors that help it operate indoors and outdoors; in fact, LEO is decked out in sensors from head to toe. It has an onboard computer, motor controllers for propellers and legs, an inertial measurement unit, batteries, and a stereo camera for navigation. There are four angled propeller thrusters attached onto its shoulders, which work a bit like wings—they allow the robot to fly and keep upright while it’s walking. Information from the sensors and cameras are relayed back to LEO through feedback control algorithms, which tell LEO what to do next.

The robot’s balance is pristine. When LEO walks, it kind of wobbles. You can poke or probe it, and it won’t fall over. This kind of balance is what allows it to carry out actions considered difficult even for humans, like steering a skateboard and shuffling along a slackline.

Imagine that as humans walk, we shift our weight, lean forward, or bend at the knees, adjusting the position and orientation of our legs to keep our balance. LEO does something similar.

[Related: This magnetic robot arm was inspired by octopus tentacles]

Most advanced two-legged robots can tackle multi-faceted terrains that may be rocky, dip up and down unexpectedly, or warp and twist like a labyrinthe, in the same ways humans do: by switching expertly between jumping, running, climbing. In the past, flying robots approached these challenges by avoiding the ground altogether, but they have their limitations too; mainly, they consume a lot of energy during flight. A robot from Boston Dynamics can even parkour.

“Robots with a multimodal locomotion ability are able to move through challenging environments more efficiently than traditional robots by appropriately switching between their available means of movement,” Kyunam Kim, a postdoctoral researcher at Caltech and an author on the paper, said in a statement. “LEO aims to bridge the gap between the two disparate domains of aerial and bipedal locomotion that are not typically intertwined in existing robotic systems.”

So what’s the point of this clever bot? Broken down into parts, the separate mechanisms that come together to make LEO could be independently used to improve landing gear systems for existing robots and other types of flying machines. This could even be extended to a future Mars rotorcraft, for example, the team says. LEO could also perform inspections, repairs, or replacements at locations that are difficult for humans to reach, like on rooftops, high-voltage telephone lines, or bridges.

But, as robotics go, LEO could always be better. The team already has plans to rework its leg design so that it’s more rigid and can support more weight. They’re also thinking about increasing the thrust force of the propellers.

Lastly, they’re tinkering with ways to make LEO more autonomous so that it can sense its surroundings in order to self-adjust how much weight it puts on the legs and when it should transition from walking to flying. The team plans to install a drone landing algorithm in LEO as well, which involves deep neural networks that can help LEO calculate the best landing trajectory using its current speed and position. And if they integrate additional sensors that can help LEO better understand the state of its environment, then it could make its own decisions about what combination of walking and flying would be the safest, most energy-efficient way to get from point A to B.

Watch LEO in action, below: