Mary Poppins would be proud 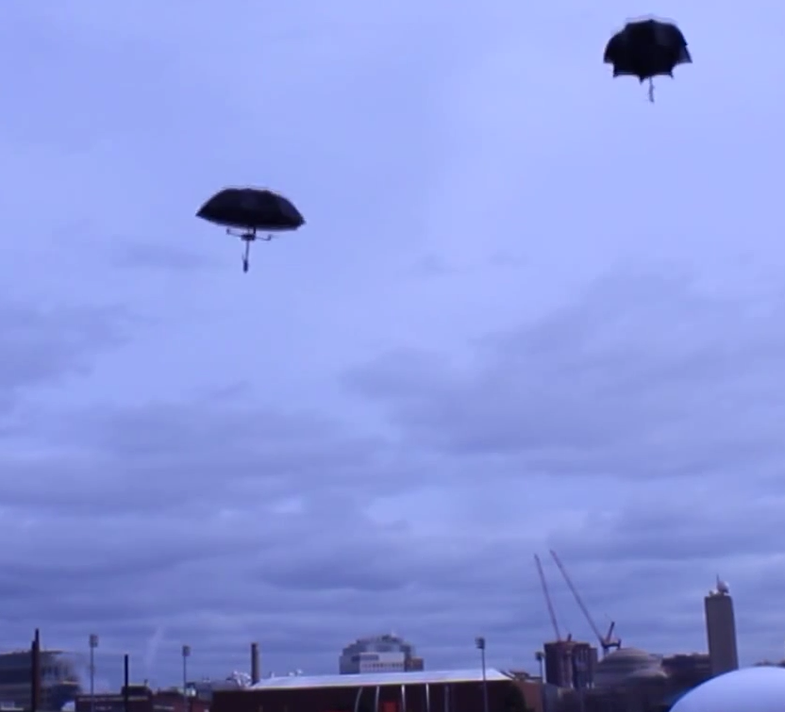 The sight of flying umbrellas, changing altitude with a fluttering rhythm, looks more like an animated Disney scene than graduate work by a student engineer.

“I wanted to push the envelope of coordinating drones in the sky,” says the project’s creator Alan Kwan, a student in MIT’s “ACT” (Art, Culture and Technology) program. He wanted his drones to act almost alive, “not like things to be controlled by an algorithm,” he says, “but flying creatures that take on a synchronous life.”

A Hong Kong native, Kwan, 25, has explored scientific art before. He won an award for his Beating Clock project, a reanimated pig heart that keeps time. He’s also exhibited numerous virtual reality projects, like terrifying simulations of mental hospitals and alien abductions. Perhaps the most memorable is Bad Trip, an explorable 3D dreamscape filled with scenes from Kwan’s daily life: ten hours of first-person “life logging” videos that he has been recording since November 2011.

Kwan’s interest in blurring the mechanical and the organic is visible in his Beating Clock project.

Coming off his virtual pursuits, Kwan wanted to explore a physical, real-world project. He found an opportunity in February 2015, when the University of Applied Arts in Vienna commissioned him to explore synesthetic works for their Digital Synesthesia Research Project (DSRP).

Traditional synesthesia is a rare neurological condition where sensory experiences overlap—a person might associate sounds with colors or words with flavors. Digital synesthesia, according to the DSRP’s website, is “an artistic research area which focuses on the possibilities of digital art to create translational and cross-modal sensory experiences and to provide synesthetic experiences for “non-synesthetes.”

Kwan decided to create a synesthesia-like experience by flipping the audience’s perception and giving a typically inanimate object a life of its own: He would make umbrellas behave like jellyfish.

“I think flying robots really embody our fascination with unreal things flying in the sky,” Kwan says. The DSRP agreed—they accepted his proposal for umbrella jellies, and Kwan received additional funding from the MIT Council for the Arts.

The trouble started when Kwan started building: As soon as it began, the project was beset by technical setbacks. Umbrellas are not particularly aerodynamic—neither are the jellyfish Kwan wanted them to imitate.

First, Kwan tried to rig umbrellas to commercial drones, but that method failed quickly. The drones Kwan wanted to use concentrated all their mass in the center of the flying body. This meant that the shaft of the umbrella had nowhere to go, and placing it in an off-centered position threw off the drone’s balance. He would have to build a drone from scratch. 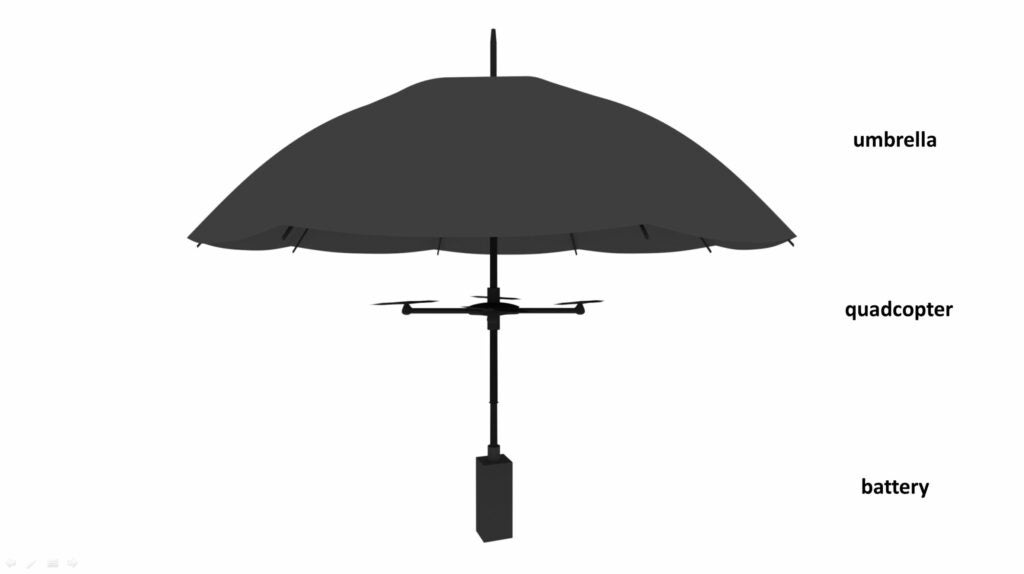 Kwan’s design employs a custom drone that is center mounted to the umbrella, with the battery serving as a stabilizing weight.

Kwan’s classmate, Bjorn Sparrman, helped him to fabricate the custom carbon fiber and metal components of the new drone. The pair also received input from interested peers and faculty.

The umbrella did not just need a holder—the custom drones needed to compensate for the weight of the umbrella, its aerodynamic drag, and its disruption of a free airstream to the drone’s propellers.

“It generates a lot of resistance,” Kwan says. “Airplanes and helicopters are much more aerodynamic. This is, however, a performance. It’s not about drones. It’s about umbrellas—the drones are a tool that we use.”

Sustained flight was becoming possible, but takeoff was not. Kwan developed a launching platform that would accommodate the awkwardly shaped aircraft and let it land more precisely.

Within three months, the drone was successfully airborne indoors. But it had not yet stood up to the rigors of open skies, and it did not yet move like a jellyfish. Kwan tried to devise a mechanical method for the umbrella to pulsate like the real thing. This idea literally would not fly: The servo motors necessary to power such a system would weigh the drones down too much.

But as it turned out, the servos were not necessary—nothing was. When the drone’s propellers hit just the right speed, the rotors actually changed the air pressure above and below the umbrella. This pulled the umbrella open and shut, just slightly, which created a rippling jellyfish effect. This method is actually similar to the way real jellyfish move. Engineers have compared jellyfish propulsion to helicopter propulsion, finding that a helicopter’s thrust is much less efficient than the biological version.

By February 2016, Kwan’s flying umbrellas took off outdoors and unassisted. Synchronized to music, the bizarre concept achieves the artist’s goal: Technology has transformed a mechanical object into a living—and flying—creature from the sea.

Digital synesthesia is not the only goal of Kwan’s project. “People have this perception of drones as weapons,” he says, “and I’m trying to push this work in the direction of the poetic. I think that contrast is interesting.”

That perception has posed another problem: drone regulations. International attempts to showcase Kwan’s umbrella jellies have been halted by the complexity of some countries’ laws about operating drones in cities.

Luckily, a June 22nd press release from the FAA has clarified and codified America’s rules governing small unmanned aircraft. According to the new regulations, Kwan is free to exhibit his flying spectacle in the U.S. as long as the drones remain within his line of sight and obey a 400-foot ceiling, a 100-mile-per-hour speed limit, and a 55-pound weight maximum. So the flying umbrellas could be coming soon to a sky near you.