Human In Robotic Exoskeleton To Kick Off The World Cup

The brain-controlled augmented suit was developed to give mobility to victims of paralysis. 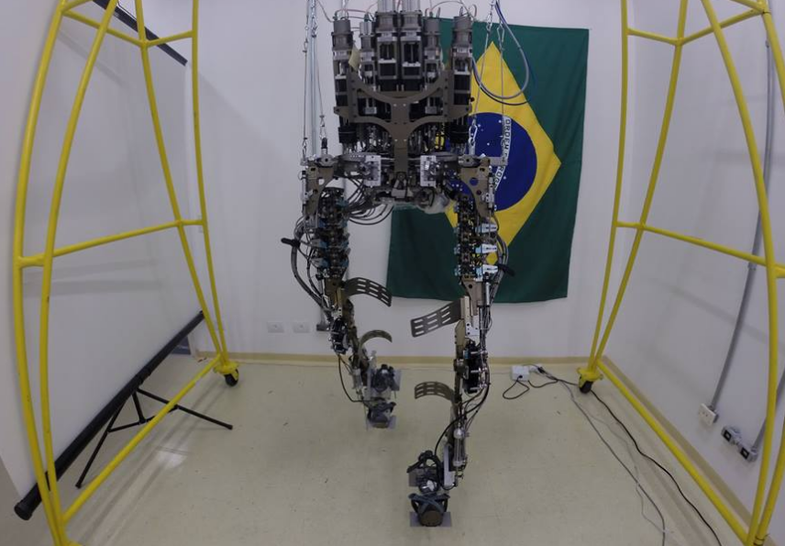 The most significant moment of the 2014 World Cup may take place not in the tournament’s final match, but in its earliest minutes. If all goes according to plan, at the opening ceremony in Sao Paolo tomorrow, a paralyzed person will rise from a wheelchair, take several steps, and kick a soccer ball into a goal. The feat will be accomplished thanks to the Walk Again Project, a battery-powered, mind-controlled exoskeleton developed by an international team of scientists. According to the lead scientist on the project, Duke University neuroscientist Miguel Nicolelis, Ph.D., the kick will be a signal to the world that wheelchairs will soon become obsolete.

Since last year, Nicolelis has had his eye on the 2014 World Cup as the perfect opportunity to capture a victory for science. “I thought it was a way to show the World Cup can be more than just football and parties,” he says. He hopes the most popular topic of conversation in Brazil, besides football, will be neuroscience.

The exoskeleton — a system comprising a helmet implanted with a microchip that sticks out from the underside; a T-shirt loaded with sensors; metal leg braces; and a battery worn in a backpack — is set in motion when the user envisions himself making the kick. The chip translates those electronic commands to a digital language that powers the skeleton, which then moves accordingly. The T-shirt vibrates to enhance the user’s sensation of movement (and eliminate the need to look at his feet to see if he’s stepping forward).

“It won’t be herky-jerky,” says Alan Rudolph, Ph.D., the vice president of research at Colorado State University and the managing director of the project. “The integration of the hardware and human signals will be significant, with truly elegant fine motor control.”

The major advance over previous exoskeletal prostheses is how seamlessly the patient’s thoughts control the movements of the suit. Nicolelis says that “interaction between the brain and the exoskeleton becomes so vivid, so clear that [patients] feel like they are walking by themselves. The body is doing the job, not the exoskeleton.”

Nicolelis’ grandfather suffered Parkinson’s disease and his grandmother had a series of strokes, and “seeing the devastating effects” of these ailments motivated him to improve the lives of paralysis victims. In the 1990s, Nicolelis helped build the first mind-controlled arm. Using similar brain-machine interfaces in 2008, Nicolelis and his team tested the mind-control capabilities of an exoskeleton on a rhesus monkey. At first, while wearing the suit, the monkey ran on a treadmill and watched on a monitor as a robot in Japan mirrored its movement. Eventually the monkey was able to stand still and make the robot jog by only using its thoughts.

With the brain-machine interface working, the next task was to design a suit that would “enable the robot and the subject to sense the world,” according to the lead robotic engineer on the project, Gordon Cheng of the Technical University of Munich. “The new skin sensors we developed have the same functionalities as human skin — able to sense temperatures, pre-contacts, touch, vibration. The real innovation here is really not just the sensors themselves, but the methods we used to deploy them, self-organizing hundreds of these sensor cells automatically through advanced algorithms. Additionally, we are using these sensors inside the exoskeleton to monitor the comfort and movements of the subject.” 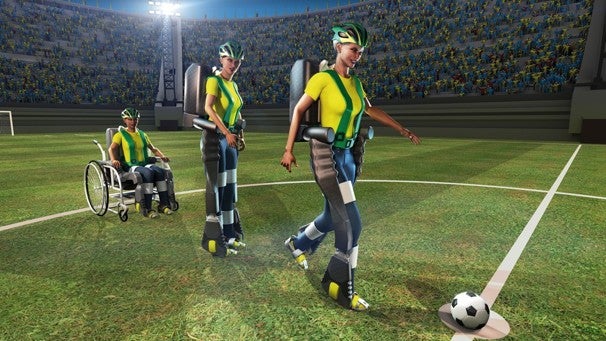 With a $20 million grant from the Brazilian government, Nicolelis pulled together a team of 166 neuroscientists, roboticists, technicians and laboratory staff from six countries in January 2013 — just 18 months before the World Cup. “They are all my personal friends, most of them deciding to work for free,” Nicolelis says of his ambitious group.

This spring, the final tests were done on the human exoskeleton in France, while in Sao Paulo, a group of eight people — one of whom will be chosen for the milestone kick — trained on a virtual-reality simulator, similar to how pilots train in flight school. By the final week of May, the locomotion process felt “effortless,” for all eight patients, according to Nicolelis.

“The big challenge was to overcome the skepticism,” Nicolelis says of those who doubted the project would be ready by June. “We knew this would be possible. Most people thought this was a great idea but that it was not possible.”

Nicolelis is now developing a more advanced version of the exoskeleton that will operate via a microchip implanted directly into the user’s brain. A direct implant will collect more neuron data and sharpen the fluidity of movements. He expects the World Cup demonstration will generate the momentum needed to make devices using brain-machine interfaces commonplace in the near future. Eventually, he hopes, the suit will restore some self-reliance to stroke victims, car crash survivors, injured soldiers, or even elderly people at risk of falling.

“I have no doubt in 10 years that you’ll see people walking in the streets with these devices,” he says. “You basically show people that there is hope that this can come to fruition faster.” He believes that in 30 years an exoskeleton will enable a victim of paralysis to compete in the Olympics.

“When you have a goal, deadline attached, that’s worthwhile, you can gather the best minds in the world,” Nicolelis says. “That’s what we want to show the kids all over the world. Science can change the lives of a lot of people.”