ATRIAS stands for “Assume The Robot Is A Sphere” 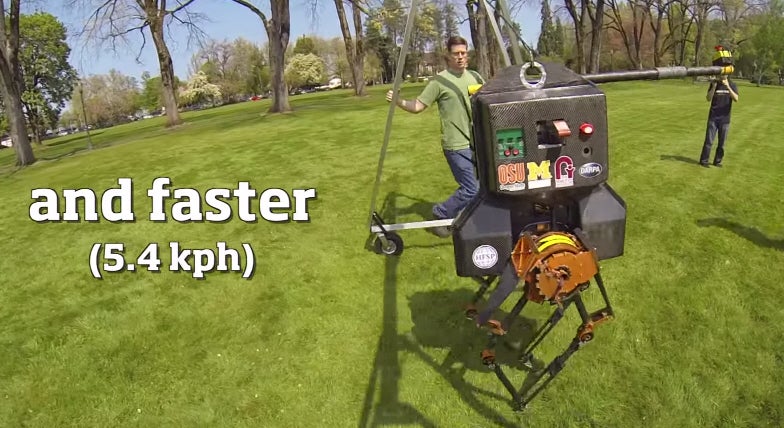 Humans are incredibly well-balanced machines. As a species, we’ve mastered bipedal locomotion, which is challenging for other animals as well as the machines we make. Even BigDog, the reigning champion of robots that walk, does so on four legs. ATRIAS, a bipedal robot made by Oregon State University, recently took its first steps outside onto the uneven ground. And like many an undergrad, it did so with several buddies nearby to make sure it stayed upright.

ATRIAS stands for “Assume The Robot Is A Sphere” which is both a design philosophy and a good name for an synthpop band. Assuming something is a sphere is an old physicist’s joke, about reducing the properties of an object until they’re easy to represent with math. Building a robot from this philosophy means the research team designed a very simple model for a walking robot, to make the rest of their work easier. Unlike some robots, ATRIAS isn’t actually a sphere, so it’s been a long process getting the robot ready to walk on uneven ground. In 2013, MARLO, a cousin robot to ATRIAS at the University of Michigan, took a walk on paved ground outside. Prior to this test, ATRIAS walked across lumpy ground in a lab, and maintained balance while being pelted by dodgeballs.