University of Michigan's MARLO is one giant leap for robot-kind 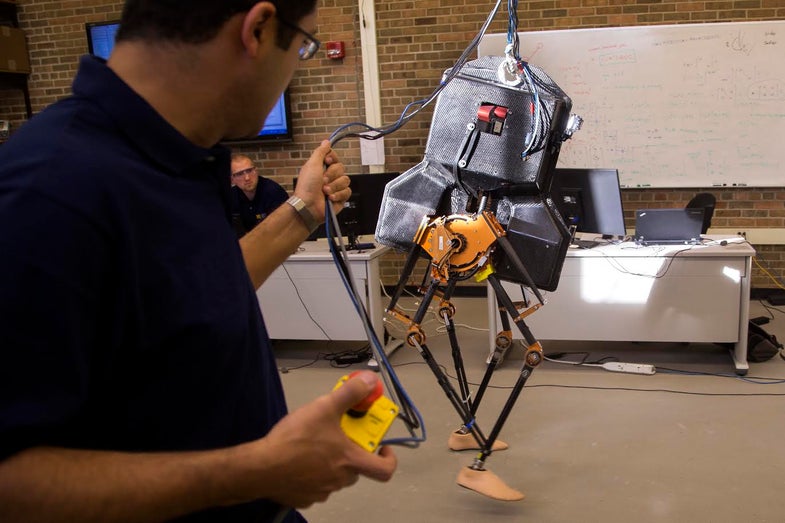 Humans evolved to walk on two legs, but getting robots there has proven quite challenging so far.

That’s why it is amazing to see this bipedal robot, developed by the University of Michigan, walk without the help of a support beam.

The robot, dubbed MARLO, is more dexterous than its bipedal sister, MABEL, which was developed in 2008.

Although MABEL was the fastest bipedal robot with knees, reaching a 9-second gait, the robot had to be attached to a metal rod to keep lateral stability as it ran around in a circle pen. See it in action below:

MARLO, which looks like a Darth Vader helmet with legs and people feet, can walk in all directions and even go outside with no external help to keep balance.

“MABEL was constrained to one plane, which is not much different to old Mario games,” says Brent Griffin, a researcher at the University of Michigan College of Engineering who’s working on the two robots. “But when you go the full 3-D you need more control to handle the additional dynamics.” Griffin also stressed to Popular Science that his views don’t necessarily reflect those of his employer or his colleagues.

Where as MABEL only had four actuator motors to help it move, MARLO has two additional ones to allow its hips to move in the frontal plane as well as laterally. MARLO’s design is based off of its cousin robot, ATRIUS at the University of Oregon, which took its first steps outside in April 2015.

Despite the difficulty of getting them to walk and balance on their own, bipedal robots have a lot of advantages, says Griffin. Not only would a bipedal robot have access to terrain that is not accessible to wheeled vehicles, they would also be able to more seamlessly navigate our human-built world. A humanoid robot would be able to utilize purpose-built humanoid tools such as ladders and stairs, as well as traverse terrain difficult for other types of robots, such as walking trails.

And unlike the four-legged freaks that competed in the DARPA robotics challenge, bipeds are very energy efficient at traveling long distances compared to a lot of quadrupeds, says Griffin. This energy efficiency would allow for smaller, more practical batteries.

As of right now, the controls for MARLO are very simple. The robot only has a go-button to start walking and no ability for someone to make it change direction. It also has no external sensing, so it is essentially as if a person was walking blind, says Griffin. However, more advanced controls aren’t too far off in the future, he said.

There are a lot of challenges with building a bipedal robot that mimics a humans gait, since human walking is essentially controlled falling. There are also limitations to current technology that add a whole other challenge, Griffin adds. But robots like MARLO are just the beginning.

“There’s proof in all of us that bipedal walking can be stable,” says Griffin.