When the six-foot-two, 330-pound humanoid robot falls, no one is surprised. In part, that’s because this is what Atlas does.... 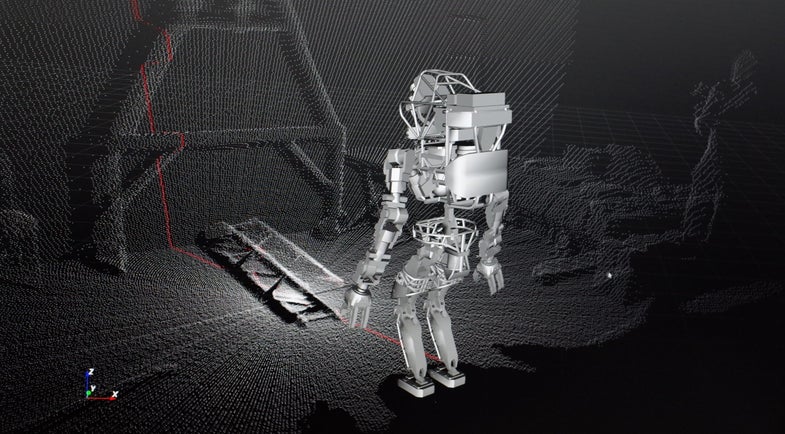 When the six-foot-two, 330-pound humanoid robot falls, no one is surprised. In part, that’s because this is what Atlas does. Like the nearly identical Atlas models loaned out to other teams competing in the DARPA Robotics Challenge, and the ones that have lost their footing on camera in the past, this bot tends to go down. In fact, the researchers at MIT’s CSAIL (Computer Science and Artificial Intelligence Laboratory) predicted exactly when it would fail—three paces into its aggressive stride. And, true to form, Atlas steps, steps, steps and goes over, rescued from a face plant onto the concrete floor by the cable attached to the roll cage that serves as its skull.

None of this is new, or news. Humanoid bots are notoriously unwieldy machines that struggle to ape the dynamic sense of balance and constant, minute adjustments that keep most humans effortlessly upright. What’s interesting is why this version of Atlas is losing control so quickly.

At the beginning of this demonstration for media, CSAIL postdoc Scott Kuindersma blamed the problem on a “bug in the code,” some mysterious side effect of the team’s effort to strip out all of the code provided by Atlas’s maker, the Google-acquired Boston Dynamics, and instill the robot with all-new control algorithms.

But it isn’t the software that’s making this Atlas tipsy. It’s the robot’s hands. One of the most sophisticated robots on the planet is repeatedly toppling itself because it can’t account for the marginal weight of its own three-fingered grippers.

You’d be hard-pressed to find a more succinct example of what makes humanoid robotics so exciting, and yet so deeply unprepared for use in the real world.

What’s cool is that Atlas can do anything at all on two legs. As explosive as robotics R&D appears to be, with Amazon, Facebook and Google all investing heavily in the field, the successes of humanoid systems are weighed against other humanoids. Five of the eight best-performing teams in the DRC’s first physical trials this past December were using Atlases (CSAIL came in third). The robot powered through a battery of disaster response-themed tasks, their hydraulic actuation outclassing most of the competition’s electric motors. Compared to the majority of the field, Atlas was pure grace under fluid pressure, the synthetic equivalent of a pro athlete.

Compared to most humans, however, Atlas is a barely mobile mess. During the same demo at MIT, it needed multiple tries, spaced over various minutes, to pick up a single two-by-four. It walked to the board without failure, but at a pace so slow and cautious, you had to suppress the urge to help the doddering thing across the converted garage (its imposing, weightlifter-like bulk and rotating warning light notwithstanding). When it got there, a researcher monitoring the robot’s physical intentions—the on-screen interface is mesmerizing, with a detailed 3D model of Atlas and its surroundings, and color-coded indicators of where it plans to step or reach—had to intervene, ordering it to use the other hand, to avoid colliding with its own body. If Atlas were a person, it would be confined to a wheelchair, and cared for by a live-in nurse. (Note: The following video is short, but not very exciting.)

And that’s without considering those pesky hands. “It’s the hands!” someone says while Atlas is swaying on its safety tether. The researchers huddle at the nearby bank of computer monitors, and break up looking pretty triumphant. As Kuindersma explains, the robot was originally shipped to competitors bearing stumps. Teams were provided with two choices of generic hands, including models built by iRobot. MIT ran through those and other options, finally settling on its own combination of gripping and sensing, attaching a camera and a tactile sensor to an existing three-fingered manipulator. Atlas still thinks it’s all stumps, and isn’t factoring in the weight of its enhanced hands.

Those enhancements don’t seem entirely legal to me—the point of giving an Atlas to qualifying teams was to provide baseline hardware, and focus their efforts on control software. Doesn’t adding sensors amount to a significant hardware change?

According to Kuindersma, DARPA has cleared teams to add components as they see fit to Atlas, from the wrists down. By boosting its sensing features, CSAIL unwittingly created a stability bug. Offsetting the hands’ weight probably won’t be a serious challenge, but other bugs will invariably pop up, such as the redistribution of weight when Boston Dynamics replaces the huge, ungainly power and hydraulic tethers on all of its Atlases with battery packs, effectively unplugging the bot for the first time (those overhauls should happen within six months).

If you’re still reading this, then congratulations: You clearly like robotics. While robots themselves are neat, wiggling and shuffling and making for neat clips and GIFs, the appeal of robotics isn’t necessarily in the machines that are ultimately produced. Robotics is troubleshooting. Robotics is merciless, and hard, and humanoid robotics is probably hardest and cruelest of all. Atlas and its ilk could remain functional invalids for years or decades to come. That’s fine. It’s the high degree of difficulty, and the fact that even the best humanoids are bumbling underdogs, that makes it so easy to root for them.