This little robot can jump three feet in the air

But it can't stick the landing yet 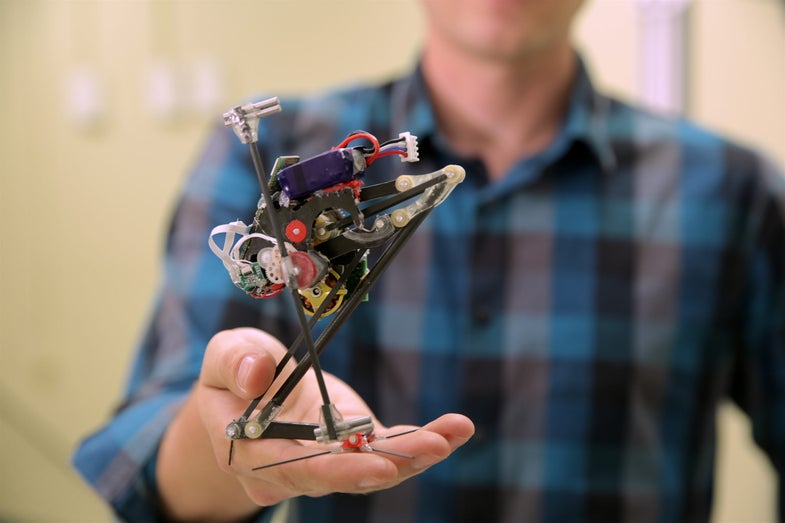 In the future, flocks of small, one-footed robots may bound across areas too dangerous for humans to traverse, carrying out search and rescue operations. They’ll be able to leap across rubble like monopodal kangaroos. Today, their predecessor prototype tends to fall over after most jumps.

The landing needs work, but the jumps themselves are impressive. The robot, SALTO, can leap up to a meter into the air. That’s no small feat for a robot that fits into the palm of your hand and looks like a wind-up bird leg with a battery strapped on its back.

“We wanted to be able to jump high and fast,” says Duncan Haldane, one of the robot’s developers, during a teleconference held by Science Robotics.

SALTO, which stands for Saltatorial Locomotion of Terrain Obstacles, uses just one foot to push off from the ground for its super-powered leaps. By starting in a crouched position, the robot can use its onboard motor to transfer energy to a spring. That spring is crucial. Without it, SALTO would reach a height that impresses no one.

And just like a galago, and unlike other jumping robots, SALTO can jump again and again. SALTO is able to bring its leg back into a super-crouched position quickly, readying itself for another leap. So far, the team has tested SALTO’s ability to jump at a wall, position itself, and bound off that wall to gain even more jump height. But SALTO is pretty bad at keeping its balance in the air, making extended forward motion tricky.

In the air, SALTO can sense its orientation and adjust slightly using a small tail. It’s not enough for a massive re-positioning, but it’s enough to line up a second jump against a vertical surface. After that, it requires a giant net, or a pair of waiting hands, to make sure its feeble frame isn’t damaged.

SALTO isn’t the highest jumping robot out there, but robots capable of jumping two meters or more into the air tend to cheat. They rely on lengthy spring wind-ups to pack power into their attempts. SALTO can store less spring energy, faster, but for an overall more efficient jump.

In a stair-climbing race, says Ron Fearing, another SALTO developer, their robot would win. “The wind up one might get a good head start, because it would jump four steps to begin with, but we would exceed it because we can jump more frequently.”

That ability to make smaller bounds more rapidly is why the team believes future iterations of SALTO will be immensely helpful in search and rescue operations, even if the robot itself can’t lift a steel beam to help a human trapped underneath. “The robot itself is not going to drag someone out of a collapsed building,” says Fearing. “The idea is that the robot will be able to maneuver on top of the rubble and be able to explore.”

But even being able to navigate dangerous areas and highlight important places to search could be valuable. “The reason we’re concerned about speed is that you can actually plot the chance of survival of a person trapped in rubble against time. And that plot never goes up,” said Haldane. “The clock is always ticking.”

But there are hurdles to overcome first. Not actual hurdles, as SALTO should be great at clearing those. Other hurdles, like the fact it has a battery life measured in minutes and can only travel in a straight line.