How Ford adapted one of its coolest trucks for off-roading

An inch of extra clearance empowers a ruggedized new version of the Maverick pickup to leave the asphalt behind. 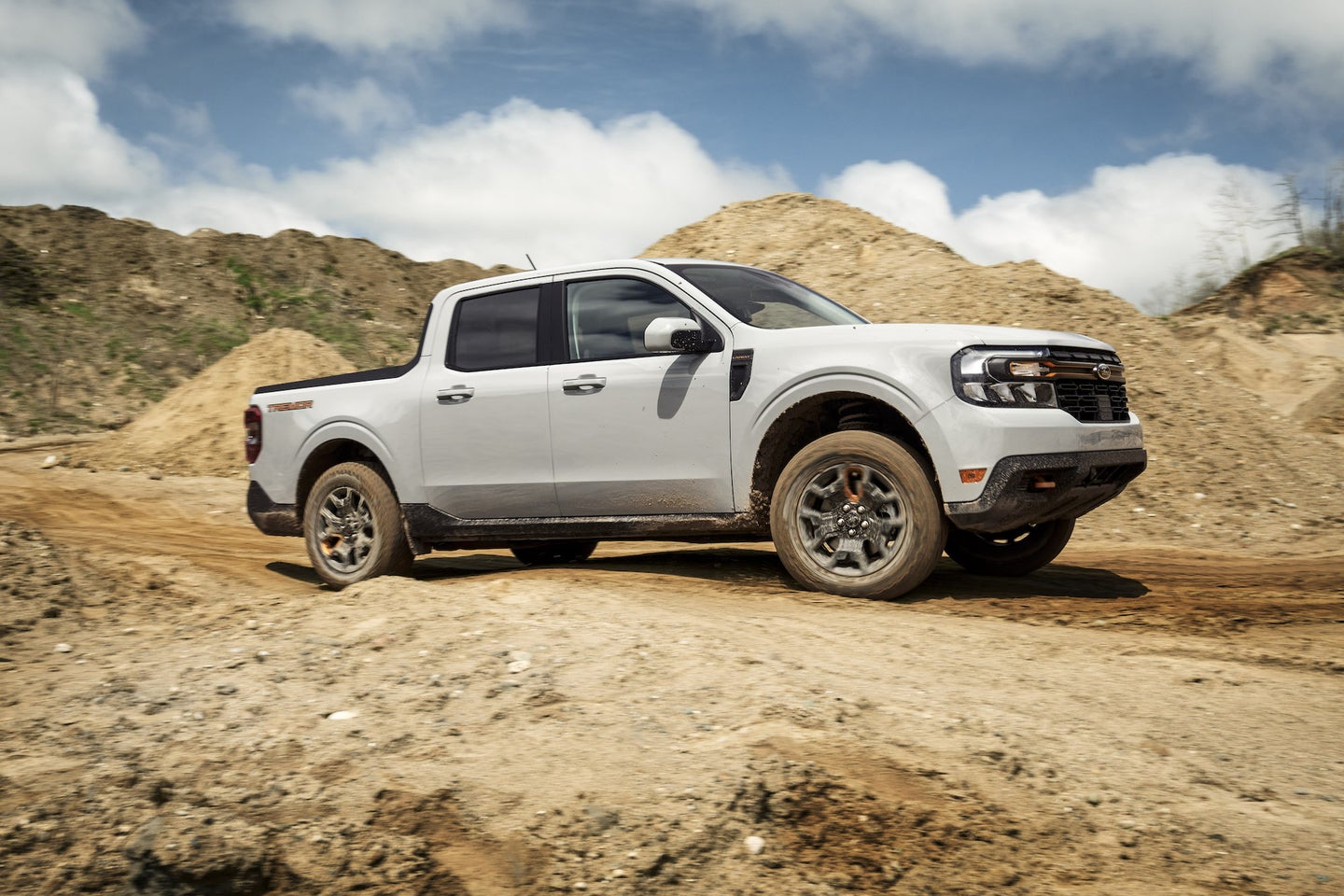 Ford looked into its crystal ball, saw the red-hot firestorm it had created with the launch of the Maverick, and predicted it would sell out. Sure enough, it did, and as reported by The Drive, the Blue Oval opted to close orders in January of this year to keep up with customer demand. Gird your loins, because the window for Maverick orders is about to open again, and the truck has a shiny new option on tap.

The original Maverick launched in 1970 as a two-door coupe (and later, a four-door sedan) available in the US until 1977 when it was discontinued, and the name temporarily retired. The Maverick moniker bubbled back to the surface inside the Ford hive mind and burst back onto the scene as a cool new compact truck for model year 2022. Offered with either a 250-horsepower turbocharged 2.0-liter engine or a hybrid version with a 2.5-liter engine that is rated for an impressive 40+ miles per gallon, the Maverick starts at $22,490.

When it comes to fuel economy, the Maverick is a superstar as a hybrid; to compare, its competitor the 2022 Hyundai Santa Cruz truck mashup gets 23 mpg combined. Even with the gas-only engine, the Maverick fares pretty well at 25 mpg with all-wheel drive and 26 mpg with front-wheel drive.

In truck form, the Maverick is affordable and compact, making it usable for work. Plus, it’s easy to park, unlike some of its larger compadres. Inside, Ford gave the Maverick clever storage cubbies and even spots where owners could insert 3D-printed accessories such as grocery bag hooks or cupholders as desired.

As off-road exploring continues to grow in popularity, Ford has been reading the room and came up with the new Tremor off-roading package for the Maverick. While orders were on pause, the company put together a set of features to satisfy those who want their compact truck with extra capability in the dirt.

The Tremor package includes a 1-inch lift over the Maverick’s standard 8.3 inches and improves ground clearance. One inch may not seem like much, but that matters when traversing a rocky trail and could save the underbelly of the truck from damage. An off-road-tailored front and rear suspension is also exclusive to the Tremor package, meaning your back and backside (and possibly your teeth) will appreciate the smoother ride.

Other additions include a rear differential lock, which ensures that both wheels spin at the same rate to improve traction, and trail control, allowing the driver to choose a set speed and have the vehicle manage the throttle and braking. And the new heavy-duty transmission cooler keeps the vehicle from overheating, particularly when pushing the towing capacity or payload to the limit.

All this is not to say that the Maverick is suddenly on par with the burly, uber-capable Bronco, which Ford re-launched for model year 2021 to great fanfare. However, the improvements will give off-road-curious buyers some leeway for slightly tougher terrain.

On the surface, the Maverick Tremor shares some aesthetic touches that match the F-150 Tremor. Orange accents lasso the Maverick’s grille with the Tremor package, etching an oval that bisects the Ford logo, and coordinating tow hooks and the fender badge are also tinged with orange. A single carrot-colored stripe adorns each wheel. Inside, the truck sports matching orange stitching and “Tremor” embroidered into the back of the seat in case you forget the name of your trim.

Buyers who want just the look of the Tremor in all of its orange-accented glory can choose an appearance-only package without the off-roading goodies for $1,495. For the real-deal lift kit, upgraded shocks and springs, and the other enhancements plus the appearance, prepare to shell out $2,995 on top of the price of the Maverick, which starts at $22,490.

You’ll want to note that the Tremor package reduces the payload, which is what you can toss in the bed of the truck. A standard Maverick can haul 1,500 pounds in the bed and the Maverick Tremor capability drops to 1,200 pounds. Why? A Ford spokesperson told Popular Science that the additional Tremor Off-Road equipment (heavy items like the additional skid plate, upgraded half shafts and twin mechanical rear drive unit) reduces the payload rating.

And really, that won’t matter to customers interested in the Tremor, as it’s geared to adventure types who are more likely to tow a pair of UTVs (it has a total towing capacity of 2,000 pounds) than hauling equipment. Also, the Tremor is only currently available with the 2.0-liter EcoBoost engine and not the hybrid.

While the Maverick isn’t available as an EV, the hybrid version has been popular, and as the industry barrels on toward full electrification it wouldn’t be surprising to see a Maverick-E in the future. Meanwhile, Ford’s all-electric Lightning has similarly rocked the brand’s numbers, and early feedback has been overwhelmingly positive.

In June, Ford reported it had sold 38,753 Mavericks. That means the new compact truck outsold the Ford Ranger pickup, and the Maverick sales number was double the number of Mustang Mach-E (the brand’s all-electric crossover) units sold. With the Tremor package, expect the Maverick to keep on growing.