The system includes a laser rangefinder, computer, and high-def camera. 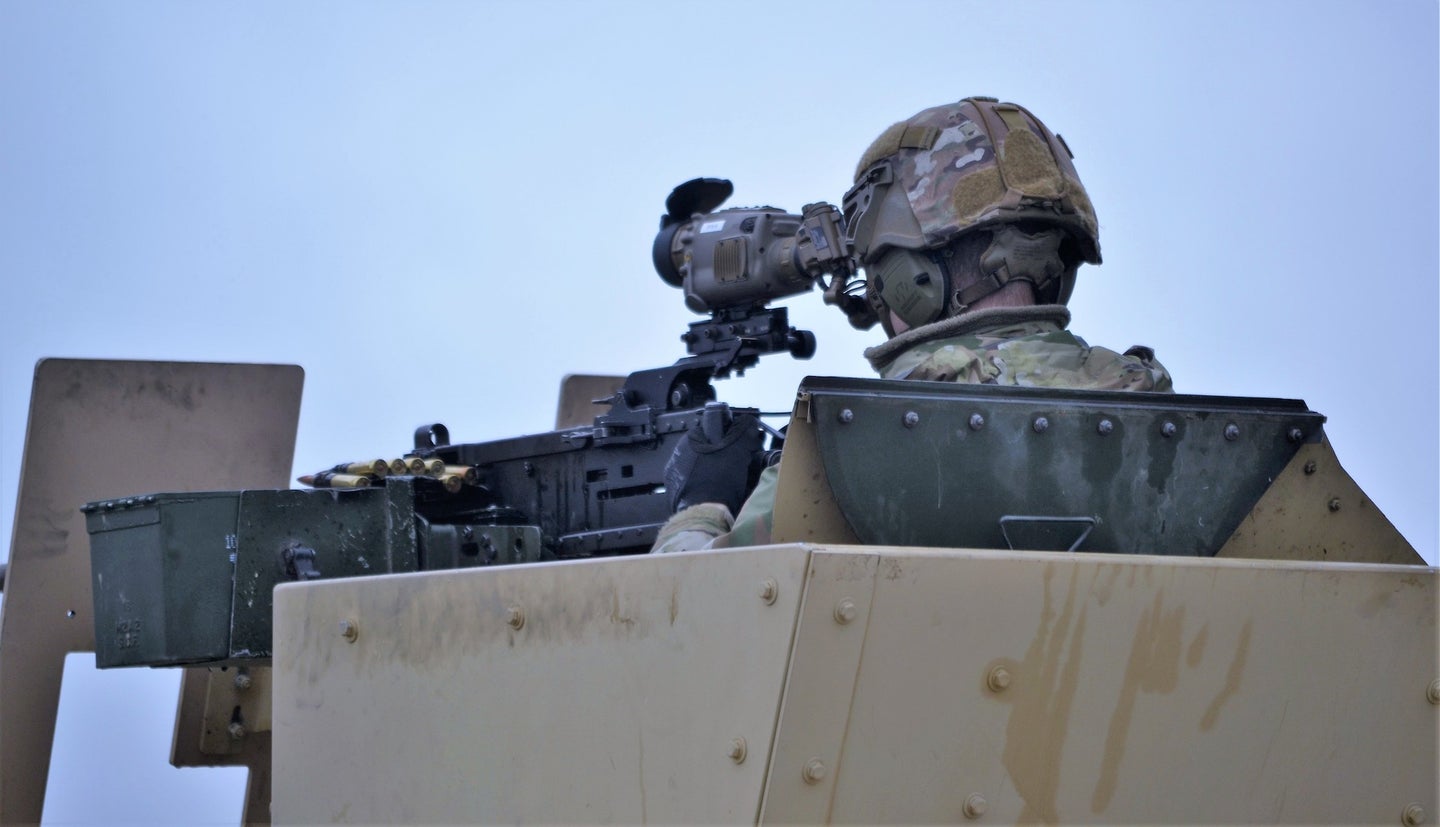 The new sight is called the FWS-CS. Frederick Shear / US Army
SHARE

The US Army is developing a new sight to go on machine guns and grenade launchers. Both weapons, broadly, aren’t known for their accuracy, but this new piece of gear should hopefully change that. Machine guns, traditionally, have been used less as a precise weapon and more to create an impassable field of airborne lead.

The new sight is formally called the Family of Weapons Sights-Crew Served, or FWS-CS. Soldiers tested it in exercises in November 2020 and February of this year. Machine guns and grenade launchers are already sighted, but adding the FWS-CS will let soldiers use those existing weapons in more ways than they can presently.

Gunsights are important because for a brief time, every bullet fired is subject to the laws of aerodynamics. Heat, wind, and even the pull of gravity can all tug on a bullet’s trajectory in flight, in little ways that add up to big changes—especially as the bullet travels further from the gun. Sights mounted to guns help the shooter compensate for all of this, and reduce visual distractions between eyeball and target, too.

Crucial to making the FWS-CS work (a catchier name would certainly help) are a built-in laser rangefinder and a computer that can calculate the ballistics of the shot. For the human operating the weapon, all that has to be done is align the sight with the target.

“The FWS-CS is the first machine gun optic to utilize the ‘disturbed reticle’ technology. Along with calculating the range to the target, the ballistic calculator can adjust for air density and works with any of the Army’s current machine gun systems,” Justin Sweet wrote in a press release for Program Executive Office Soldier, the part of the Army responsible for the sight.

Capabilities like this exist to some extent on the civilian market, though high-end ones run a few thousand dollars. Also, few if any are designed specifically to mount on machine guns, which rattle with a high rate of fire, or grenade launchers, which shake with recoil.

Beyond the ballistic rangefinding, the sight also includes thermal and infrared imaging, allowing use at night or in air conditions where normal vision is obscured. This is possible because the sight isn’t just a sight—it’s also a high-definition camera. While thermal sights certainly exist, they cannot also be used during the day like a camera scope.

What sets the FWS-CS apart, though, is not just the built-in ballistics. The entire package is designed to, according to the Army, “synchronize with other systems and be capable of broadcasting live images from the weapon sight to other head-borne systems,” over Intra-Soldier Wireless, essentially a Wi-Fi network for an individual soldier and all the gear they have on their person.

Because the FWS-CS has a built-in camera, it could potentially connect to a soldier’s heads-up display, which would mean they could target using this sight without necessarily having to level the scope to their own eyes.

Even without the integration into a heads-up display, the ability to see targets more clearly at distance could change how soldiers fight. It could make it easier to distinguish between friendly and unfriendly forces, and it could help distinguish between lawful and unlawful targets. For the people behind the weapon, it could even provide a degree of protection when operating at distance, as the soldiers pulling the triggers can fight new battles with old weapons at greater distance and accuracy than previously possible.

Three of the weapons tested with the new sight are venerable military tools. The M2 .50 caliber machine gun, variants of which were introduced in the 1930s, is an almost mythologized machine. Modern versions can fire over a thousand rounds a minute at an effective range of 6,000 feet and a maximum range of 24,000 feet, or 4.5 miles. The Army also tested the new sight on M240Bs, a machine gun with origins as a vehicle-mounted weapon in the 1970s and 80s before being adapted by the Marine Corps and Army into an infantry-carried gun in the 1990s and 2000s.

Then there’s the Mk 19 Grenade Launcher, which entered Army service in the early 1980s, though its design dates back two decades earlier. A hefty weapon, it is designed to hurl grenades against lightly armored vehicles or people. For firing at a specific target, like an incoming vehicle, the Army lists its range as about 5,000 feet. Launched to instead just blast an area, briefly making it impassible and harming anyone incidentally nearby, that range is 7,250 feet.

All three of the weapons can be fired from tripods or mounted on the top of a vehicle. Improving the sight a person uses to aim them can then increase the effective range and firepower of vehicles, giving the Army more accurate reach while on mounted patrol.

It remains to be seen if this change in accuracy will lead to a change in doctrine. After all, the Army could discover that having more accuracy at longer range on weapons like these gives soldiers more options about when to start shooting—and when not to shoot.