The aviation industry is on the verge of a major shift in propulsion, experts say. 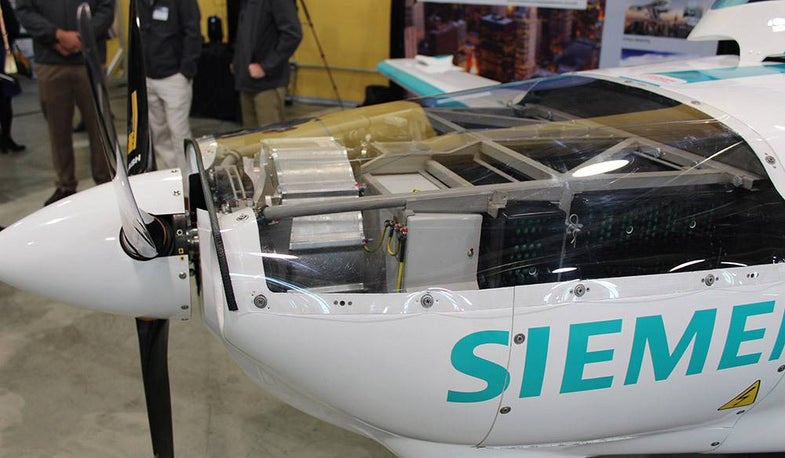 This story was originally published by Flying Magazine.

As part of Siemens Innovation Day held recently in Chicago—created, in part, to highlight the company’s progress to date in the world of electric and hybrid electric aircraft—the German industrial giant offered a first U.S. look at its electric GA aircraft, a Magnus LSA fitted with a 55-kW Siemens electric motor.

Siemens vice president of electric and hybrid-electric propulsion Terry Hamlin said the company has no intention of becoming an OEM but wants to be part of the electric solution to the aviation industry by partnering with other companies to demonstrate its expertise in designing and building electric propulsion systems. Siemens is currently working closely with Airbus and Rolls-Royce on the eFan regional airplane.

Hamlin said Siemens believes “the aviation industry is on the verge of a major shift in propulsion,” focused around three main drivers. “One is a reduction in [fossil] fuel consumption. Another is a significant reduction in emissions that can only be met by really disruptive technologies. Finally, there’s the needed reduction in aircraft noise.”

Greg Bowles agrees too that a significant change is coming to aircraft propulsion. As the General Aviation Manufacturers Association’s vice president of global innovation and policy, he manages the association’s electric propulsion and innovation committee.

Siemens says electric will become an industry standard by 2050 with a move to electrification already moving along much faster than the company expected.

“We might have a market ramp-up to a certified electric system by 2021, possibly before the end of 2020. We’ll be partnering with OEMs to help them integrate and maintain these electric systems,” Hamlin said.

The Chicago event also focused on how Siemens is currently working to bring electric aircraft to the marketplace, beginning with small aircraft like the Magnus and the Extra 330LE. Siemens used the Extra in 2017 to set a world speed and climb record in electric airplanes. The electrically powered Extra achieved a top speed of 211 mph and a climb record to 9,800 feet in four minutes 22 seconds.

Siemens is also blending the cyber and the physical worlds into its production process to reduce time to market for new products like a bearing shield displayed in Chicago. The shield is used in the Extra 330LE’s electric motor. When the original bearing shield was created, Siemens team created a digital twin that allowed them to continue redesigning, testing and optimizing a new version in a virtual reality world. Results were impressive as the original part was reduced in weight from 25 pounds to just 9 pounds.

“With every R&D dollar we’re moving toward increased power density and reduce weight on battery,” Hamlin said. She spoke to one of the newest frontiers in aviation, urban mobility concepts like electrically powered air taxis where the demand is for quiet VTOL aircraft capable of spanning intra-city distances. “Battery power is also expected to change flight training, Hamlin added.

Bowles reminds the naysayers of electric power plants about earlier days in aviation when people said jet engines weren’t going to be all that useful.

“People wondered what good jet engines would be on straight wing aircraft or an aircraft that only flew at low altitudes demanded where jet power plants were quite inefficient. We simply designed aircraft that could take advantage of those new technologies. We need to think of battery power the same way. What additional advantages might electric offer us? Although electric motors become less efficient at very low speeds, they can make torque down to nearly zero RPM.”

Argon National Labs predicts a 3 to 5 percent annual improvement in battery density. While there’s only enough energy at present for an hour flight, that fuel tank will keep growing by 5 percent per year. Pipistrel’s Alpha Electro is already certified for flight training in Canada, but still faces a regulatory hurdle here in the U.S. based on the FAA’s definitions of an LSA powerplant. Until that’s changed, the Alpha can’t be used for flight training in the U.S. Bowles agreed that regulatory changes “can be a time-consuming and painful process.”