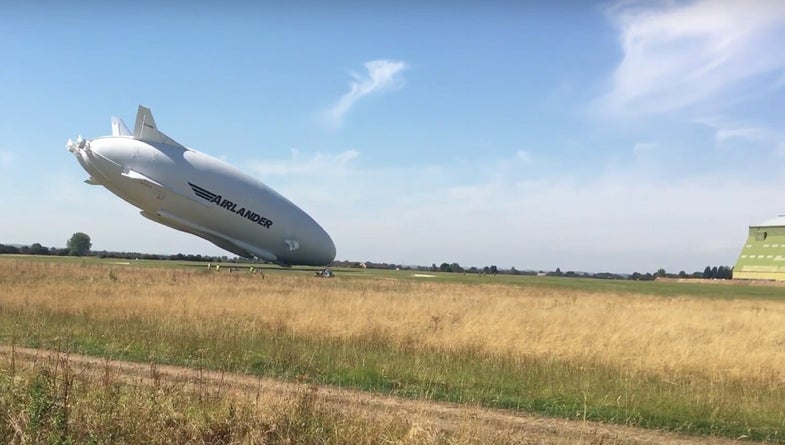 On the far right of the frame is the Cardington Sheds, the hangars where the airships are kept. Screenshot by author, from YouTube
SHARE

If an airship is going to crash, it should do so in a test flight. The large, lumbering lighter-than-air craft are forever burned into the public’s mind as a beautiful failure of a previous age, when in 1937 the German airship Hindenburg fell to a fiery death in the fields of New Jersey. That explosion shaped the perception of airships for a century, from everything to jokes in Archer and the iconic setpiece in NBC’s upcoming time travel show Timeless, set to debut this fall.

It’s with that context that everyone watched the first flights of Hybrid Air Vehicles Airlander, a modern and massive airship originally designed for the U.S. military and now aimed at life as a commercial transport. On its second test flight, the Airlander crashed. Yet unlike the iconic airship tragedies burning into our collective memory, the Hybrid Airship appeared to bump into the ground, and then level out. No fires at all! (The Airlander is filled with helium, instead of the much more combustible hydrogen that filled the Hindenburg).

This is, largely, good news. It’s not as great as not crashing, but it’s a pretty normal and pretty safe crash, as they go. This week, Hybrid Air Vehicles released a longer statement on the crash. From that statement:

Airships may no longer be solely the domain of art and nostalgia. Making a modern airship work, especially after a crash, is the domain of science. It appears that Hybrid Air Vehicles is going to figure out how to avoid the problem in the future, methodically.