5 things you have to know about the new USPS trucks

The steering wheel will still be on the right-hand side. 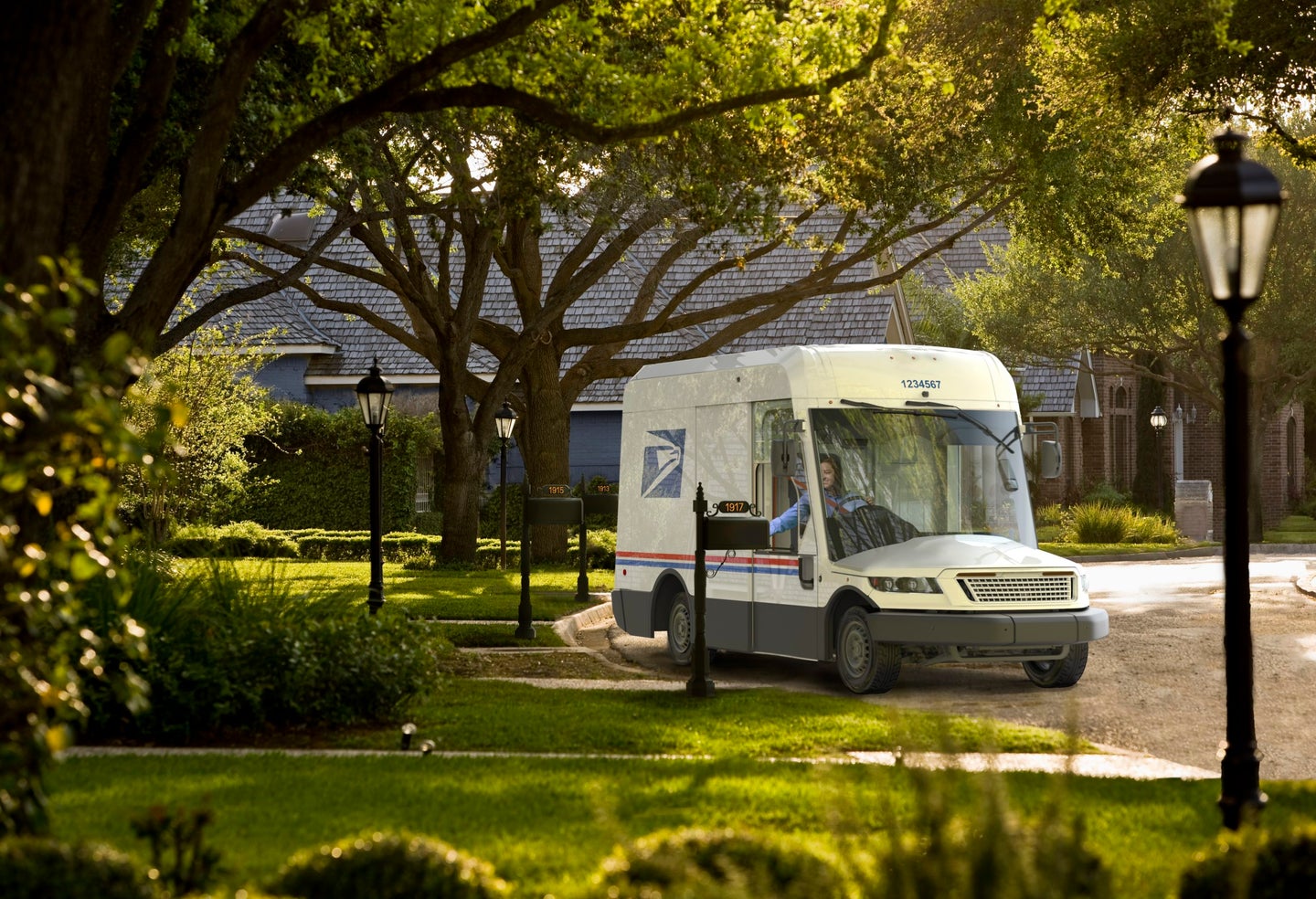 The United States Postal Service (USPS) unveiled the designs for its next-gen delivery trucks this week, and the result marks a jarring shift from the cramped cabs that zigzag neighborhoods today. The agency announced it was contracting Wisconsin-based company Oshkosh Defense to build a fleet of up to 165,000 vehicles in the next 10 years. The first wave of trucks is expected to arrive in 2023, transporting packages and letters through rain, sleet, and snow in style.

The new trucks are built for capacity, comfort, and carbon efficiency, USPS officials explained during a press conference on Tuesday. “Our vehicles travel streets and roads in all types of conditions in every community across the county,” said Kristin Seaver, the agency’s chief retail and delivery officer. “[The future models] will provide improved safety and ergonomic features, additional cargo space for packages, and other critical components designed for the unique work our carriers do every day.”

Social media, however, was less than kind to the winning concept, which comes with a $482 million contract for now. Some compared the truck’s colossal windshield to a side profile of Butthead. Others pointed out similarities to Nicolas Cage’s forehead.

Jokes and hot takes aside, it’s worth digging into the necessary upgrades that USPS is making with its new fleet. Let’s take a look.

The Next Generation Delivery Vehicles, as they’re officially called, will rock battery-powered motors or internal combustion engines with an improved fuel economy. As a baseline, the 30-year-old Grumman LLV model the agency uses today has an average fuel economy of 17 miles per gallon. USPS officials said they aim is to have a largely electric fleet by the end of the decade.

[Related: GM will only make electric cars after 2035]

Driving a mail truck might not seem so dangerous—until you consider all the kids, bikes, and runaway pets that postal carriers have to dodge on their routes. The new vehicles come with a back-up camera, 360-degree camera, and blind spot sensors in the side-view mirrors to better protect both drivers and pedestrians. An automatic parking brake and front and rear bumper sensors should help prevent further mishaps.

From 2019 to 2020, USPS saw a 19-percent bump in package deliveries and an 11-percent dip in mail deliveries. Much of that can be chalked up to pandemic shopping habits, but the agency is thinking of it as a long-term trend. To prepare for an onslaught of commercial shipment, the next-gen vehicles will have a walkthrough cargo space that rivals that of UPS, FedEx, and Amazon Prime trucks. No more squeezing through awkward window slots for postal carriers.

Weather-proofed, to some extent

Did you know that the Postal Service’s current delivery trucks don’t have air conditioning? (They do have central heat, but it’s not very reliable, according to people on the job.) The Oshkosh Defense design incorporates a cooling system that runs off the engine, making it so that carriers can catch a chilly breeze in the toughest summer conditions. No word on if the tires will be upgraded to all-season and all-terrain.

And finally, that mega-tall windshield

Sadly, the agency didn’t expand on the distinctive glass-heavy design during the press conference. But as Curbed reporter Alissa Walker points out, beyond making the truck more aerodynamic, it adds a few layers of safety through simple physics. She writes:

“The jutting lower lip of this USPS truck, as weird as it looks, is a transformative, life-saving feature. Should you be hit by this (very slow-moving, usually) vehicle, you’ll likely be struck on the legs, throwing you up onto the convex hood, where you’re a lot likelier to roll off to the side instead of under the wheels. You’re almost surely less likely to be killed.”

A sky-high windshield also eliminates most blinds spots in front of the vehicle. The results might look funny, but in the end, they should help taxpayers save time, dimes, and lives.