The greatest automotive innovations of 2021 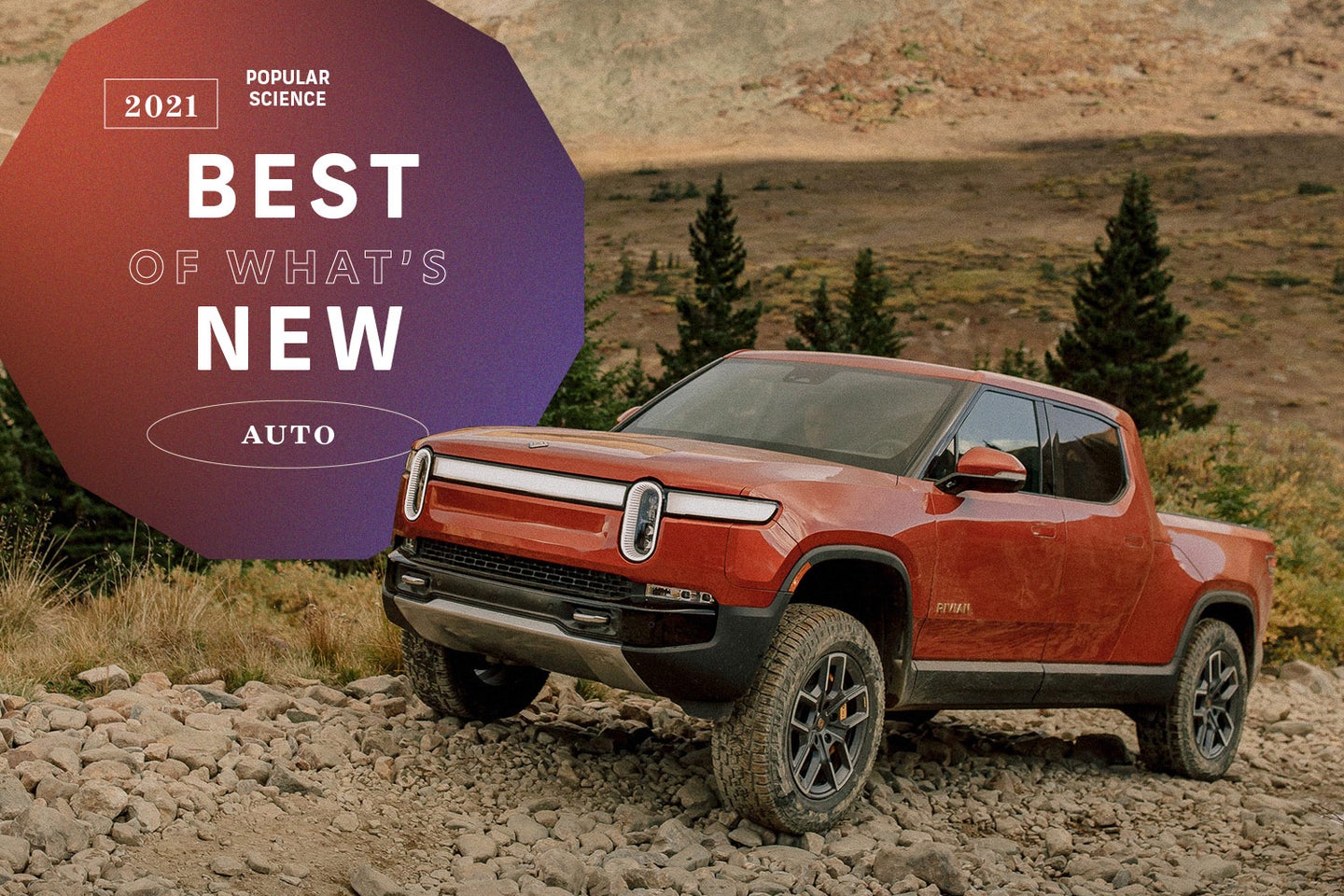 The automotive industry came into 2021 trying to beat out some extremely tough odds, not least of which being a choked supply chain. It may seem surprising, then, just how truly revolutionary the year ended up. If you’re a fan of pickup trucks, 2021 was a banner year, with Ford bringing its super-popular F-150 into the post-combustion era, and Rivian finally delivering on its lofty promises of a versatile battery-powered truck. We even got a few pleasant surprises, such as the charming Hyundai Santa Cruz, which packs the soul of a pickup into a transformed crossover. Overall, it was a pretty good year for people who like to lug stuff around.

Rivian, the Amazon-backed electric automotive startup, finally launched its long-awaited R1T electric pickup. In doing so, it beat (or at least matched) veterans like Ford and General Motors to the punch. The R1T is Rivian’s “adventure vehicle,” meaning that while it can do pretty much anything that a gasoline-powered pickup can, the company doesn’t promise the highest towing capacity or best overall bed volume. Instead, it’s more of a lifestyle truck—one capable of off-roading, overlanding, and just general outdoorsy activities, but in an EV with a roughly 400-mile range.

Rivian offers an array of add-ons that are especially handy for such adventuring. An optional three-person tent accessory enables camping on the go, and a slide-out Camp Kitchen stovetop fuels eat-what-you-catch fishing trips. And all that stuff neatly stows away in the R1T’s gear tunnel—a hollow just behind the cab—to avoid taking up precious bed space. Even with all of those features, it’s still a totally capable pickup truck. Each wheel is powered by an independent hub-mounted electric motor that together deliver a total of 800 horsepower and 900 pound-feet of torque. That’s enough oomph for the all-electric pickup to sprint from 0 to 60 in just three seconds. Yes, really.

A sports sedan that stays glued to the ground

Featuring a twin-turbocharged 3.6-liter V6 engine, the CT4-V Blackwing puts out an incredible 472-horsepower and 445 pound-feet of torque—more than enough from a sedan that can hop from 0 to 60 in less than four seconds. In order to achieve those speeds, the Blackwing employs a customized spoiler at the back, as well as air-guiding fins and a molded wing under its front, all of which keep the car pressed into the pavement so that just the right amount as air rushes over it at speed.

An unexpected marriage of a crossover and a pickup

Seemingly out of left field, Hyundai launched its all-new Santa Cruz, a compact pickup meant for urban-dwellers who need a bit more utility. The Santa Cruz has a four-foot open-top bed, but it takes its styling cues from Hyundai’s smartly designed crossovers like the Santa Fe—but with a ground clearance at a respectable 8.6 inches. The bed can’t match the total capacity found in a full-sized truck, but it can accommodate full sheets of plywood or drywall without having to angle them.

Coming standard with a 2.5-liter hybrid powertrain, the Maverick is one of Ford’s most fuel-efficient offerings. It scores a 42 mile-per-gallon EPA rating in the city, which is better than many sedans. And with the Maverick’s base model starting at $19,995, it also happens to be Ford’s most affordable vehicle, period. Ford also highly encourages owners to DIY just about everything; the truck accepts 3D-printed accessories like extra cup holders or phone mounts using the in-cabin Ford Integrated Tether System (FITS).

The car that sees when you snooze

The iX is BMW’s technology flagship. For starters, there’s the electrochromic sunroof that can turn opaque at the press of a button, and the connected in-car overhead camera can live-stream the cabin to the driver’s phone in case of a theft event. Most important: Those in-cabin cameras also promise to monitor the driver’s state, so if they go unconscious, the car can automatically find a safe spot to pull onto the hard shoulder without putting other people at risk.

A modular infotainment system to update just about any car

Bringing older cars into the world of large infotainment screens can be difficult due to space constraints. At the same time, many modern models employ phablet-style infotainment displays that protrude from the dashboard. Coupled with shallow dashboard mounting, either setup makes replacement all-but impossible for many cars. Pioneer has thought up a modular solution in the form of the new DMH-WC5700NEX receiver. The 6.8-inch screen can separate from the rest of the in-dash electronics, so the screen can mount discretely from the rest of the unit. This means that you can place the screen, which works with Android Auto and Apple CarPlay, virtually anywhere.

An electric car that doubles as a power station

The Ioniq 5’s smart looks and tech-centric features make it seem like the perfect daily driver for any EV-curious driver. But here’s the coolest part: The car can use as much as 80 percent of its stored electricity to send juice to just about anything with a standard power cable—think of it like a giant battery pack on wheels. Hyundai says that its Vehicle-to-Load charging enables the Ioniq 5 to supply up to 3.6-kW of power to external devices, which is perfect for devices like a laptop or tablet. And during events like camping trips or a power outages, the Ioniq can supply small appliances or even charge e-bikes.

An interactive way to learn about a vehicle

Digital owner’s manuals have been around for a few years now, mostly in the form of static text and graphics, but that hasn’t persuaded owners to actually read through the entire handbook. Toyota decided to change that by creating a companion smartphone app for the 2022 Sienna’s already-digital owner’s manual. Called the “Driver’s Companion,” the app features a narrator, called Joya, that acts like Siri, responding to voice commands in easy-to-follow conversations. This feature allows the driver to ask questions such as “What is the height of my car” or “How does the bird’s eye camera work?” and get visual and audio-based responses in the app. And to make sure that the app gets the point across, it can even quiz the driver.

In spring of 2021, America’s best-selling pickup started the transition away from combustion. The new battery-powered truck maintains the familiar F-150 design and comes with up to 563 horsepower and 775 pound-feet of torque, enough to shoot from 0 to 60 in 4.5 seconds or tow up to 10,000 pounds when properly equipped. As for range, batteries come large enough to cover up to 300 miles on a single charge. And if juicing up from the road, a 150-kilowatt fast charger can add an additional 54 miles of range in just 10 minutes—not all that much longer than a typical pitstop in a combustion car. To top it off, the F-150 Lightning can also act like a battery pack on wheels, supplying up to 9.6 kW of power through the same charger it uses to fill up. This means that the pickup can help keep an energy bill low during peak hours when electricity rates are high, or keep a home lit during a storm.

An electric jeep with a six-speed manual

The Magneto has electric motors and a battery just like other electric vehicles, but it also has something most other EVs don’t: a six-speed manual transmission. However, one component that a manual-equipped EV doesn’t need is a clutch, so Jeep left out the Wrangler concept’s third pedal. After all, an electric motor can’t stall, and changing gears is largely optional in an EV. Drivers still have the benefit (and fun!) of gear selection to control how broadly torque is applied, but with the convenience of an automatic transmission’s clutchless operation.