Look inside the coolest engines at the New York Auto Show

Gratuitous photos from the show floor. 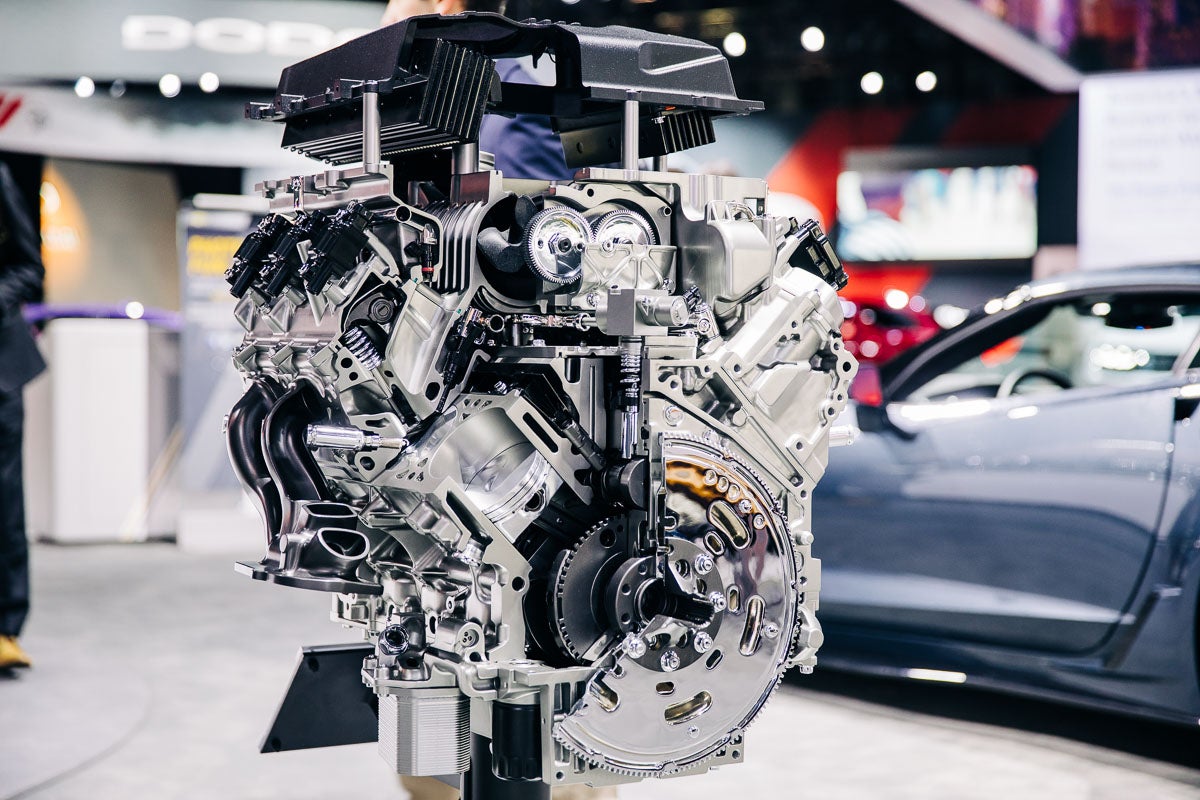 Walk onto the floor at the New York Auto Show and it’s easy to find yourself dazzled by shiny paint and swoopy bodywork. Behind all those flashy elements, however, you’ll find the engines. Several manufacturers bring engines with them and cut away some of the outer shells so you can see the intricate—and often powerful—inner workings. Here are some of the shiny beasts in all of their glory for your gawking pleasure.

This 5.2-liter Supercharged V8 has more than 700 horsepower, which makes it the most powerful street-legal Ford engine ever built. It finds its home inside the Shelby GT500. It uses the same components from the GT350, but improves cooling capacity and reinforces elements like the crank to handle the extra horsepower.

This is the 7-speed dual clutch transmission that distributes the power from the V8 engine pictured above.

This six-cylinder engine has 310 horsepower and variable valve timing (hence the VVT in the name) to help reduce overall emissions.

Dodge lit up the pistons as they moved inside this demo version of its 6.2L Hemi V8. The 797 horsepower monster powers the Challenger Hellcat.

The demo was under glass to keep curious fingers away from the moving parts, but this long-exposure photo shows motion blur on the turning elements that would turn a lot faster in a real world situation.

This cutaway drivetrain shows the intimate details of a Nascar Sprint Cup vehicle, which is why it looks a lot different from the drivetrain that’s in the Camry currently sitting in your driveway.

The 6.7L Cummins Turbo Diesel is a turbocharged in-line six-cylinder with a maximum towing capacity of 35,100 pounds.

Not to be outdone by the Cummins, Ford’s 6.7L Power Stroke V8 Diesel has a redesigned fuel-injection system and a revamped turbocharger for better throttle response.

This 450 horsepower engine is built for off-roading in the Ford Raptor F-150 pickup truck.

The Chevy LT1 6.2L V8 VVT DI AFM pushes 455 horsepower without stepping up to the more powerful ZR1 shown in the next photo.

The Chevy ZR1 LT5 6.2L V8 Supercharged VVT DI PFI is the most powerful Corvette engine around, pushing 755 horsepower and 715 lb-ft of torque.

It’s not as powerful as some of the massive pickup engines surrounding it at the show, but this 2.3L Ecoboost fits in the Ford Ranger, which recently returned after a hiatus. We’re glad it’s back.